The Queue: My triumphant return to raiding 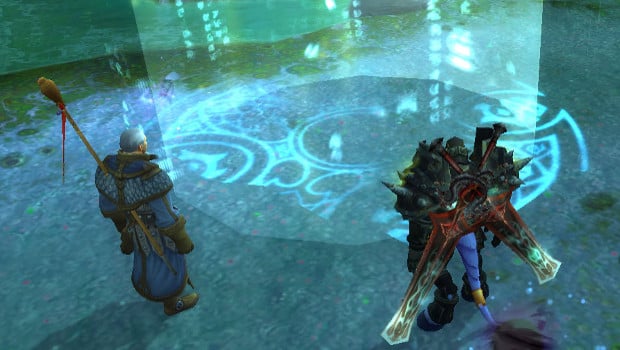 I spent the entire raid in churning agony as my intestines attempted to leap out of my body through any convenient orifice. To call it excruciating is to demean the experience, really. Hopefully I can get this Queue done before I’m consumed from the inside.

Let’s do the Queue.

I asked yesterday, but it was probably too late for most people to enjoy, so:

Do you have a favorite follower that you recruited from the inn?

Sorry, I know that’s a pretty terse answer, but I don’t. I didn’t even have the Inn until yesterday and I haven’t recruited anyone through it yet.

Q4tQ: The Val’kyr have the ability to bring souls back into dead bodies, which is a pretty impressive party trick. Do they wield this power for themselves at any point or is it always in service to a master of some sort? In other words, do they have free will to exercise this power?

They did exercise free will when they made the pact with Sylvanas. Their use of their power to return her from the dead was entirely their own idea, even with the cost.

2. Since it looks like our followers are getting capped at 675 do we think Blizzard will make follower tokens BoA at some point? I’m sitting on so many and have begun vendoring excess. I’d love to see them be useable rather than reach the end of the xpac and have to just sell them all for gold.

As of right now, I believe Hellfire Caches come from Navy Yard.

As for the tokens, I do not believe there are any plans for them to become BoA. I think that would be a good idea, but I have not heard anything along those lines.

Pirates vs Ninjas, which one are you for? And which two classes in WoW match this?

WoW already has those, so we’re good.

Q4TQ: Feathers on T-Rexes. I understand why smaller raptors may have feathers, but why would a sizable predator have them?

For starters, T-Rex and all other members of the Tyrannosauridae are members of the Coelurosauria, and you know who else is a member of the Coelurosauria? All birds that have ever existed, from the titanic Elephant Bird (the Aepyornithidae) to the miniscule Bee Hummingbird. The Elephant Bird was comparable in size to Utahraptor, which was almost surely feathered and which weighed over 500 kilograms, and which never flew. Indeed, almost all birds that have ever existed have been feathered, even massive flightless ones like the Elephant Bird or the Moa. Moa’s didn’t even have wings, but they retained their feathers. Why?

Because feathers are excellent insulation. We use them for this purpose to this day, since we went and evolved away all of our useful insulating fur and only retained some not particularly useful display hair on our heads and bodies, certainly not enough to help us deal with rain or snow or extreme heat or cold.

So why would Tyrannosaurus Rex have feathers when it was so massive? Well, T-Rex evolved from an ancestor who wasn’t that different from raptors (raptors are also Coelurosaurids) and it likely had feathers. T-Rex and other Tyrannosaurids ranged throughout North America, and while the planet was generally warmer and wetter then, there were still all varieties of habitats it found itself in. Not only would feathers be a useful survival trait for its offspring, as it got older the feathers could serve much the same purpose that a tiger’s fur coat serves. Helping the predator remain warm, breaking up its silhouette while it stalked game, and even helping it in battles against its own kind. We’ve found T-Rex bones with bite marks that could only have been made by another T-Rex – a mouthful of feathers could help prevent a bite from striking much more vulnerable flesh, in much the same way that modern predatory mammals often use fur and loose skin to preserve themselves from bites.

Ultimately, the reason we’re so confident that T-Rex at the least had feathers as a juvenile is called phylogenetic bracketing. So many Coelurosaurids had feathers, and T-Rex shares features with modern birds such as air sacs in its bones, that you can reasonably infer the presence of feathers in T-Rex. (I know I just hideously oversimplified how bracketing works, but cut me some slack, it’s a website about Blizzard games, not paleontology.) Keep in mind that T-Rex feathers would not be flight feathers, they’d be more primitive and lack the structures modern flighted birds have evolved.

And this is why Coelurosaurid dinosaurs like raptors and devilsaurs in WoW should have feathers. That’s me bringing this all back around, guys!

Do you think with the introduction of the Boosted Character, that there will be limitations on using these with a new class and/or race if/when we get more? Do you think this is a factor in determining whether we receive more?

Honestly, there might be. One of the draws of new class/race introductions is the new content they bring – people who wanted to play a monk when Mists of Pandaria launched were given the Peak of Serenity so they could level faster, but they weren’t allowed to just skip over leveling entirely. Now, mind you, monks were included in the level 90 boost, but I think in the future if they move the goalposts on the boost they’re almost certain to not allow you to skip out on leveling them. (So if the boost becomes to level 100 in Assault on Argus then you likely won’t be able to boost your Eredar or Ethereal Barbarian to level 100.)

On the other hand. perhaps they’ll include the new race or class (if there is one) and thus not have to worry about designing a new starting zone for them. Time will tell.

So that’s the Queue for today.

Note – I made Assault on Argus up. There has been no announcement of playable Eredar or Ethereals, or Barbarians as a class in WoW.