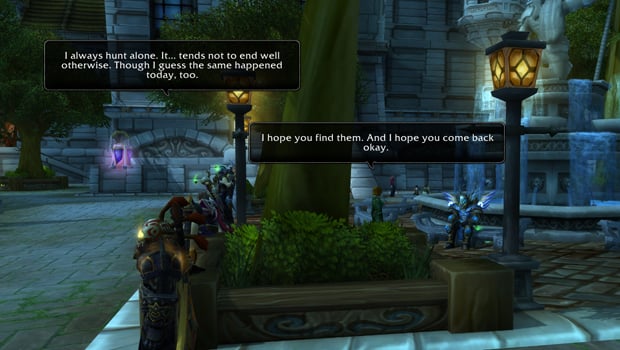 So you’ve gotten a character together, figured out who you want that character to be, maybe even installed and filled out one of those roleplaying addons while you were at it. You’re all set to start roleplaying … so now what? The simple answer is log in and start talking. But before you do, there are some roleplaying basics to consider — rules that everyone tends to go by when it comes to that whole walking around and talking to people thing. Some of these rules aren’t really rules so much as guidelines on how to play nice. Norms that are common for most roleplayers, but things new players might not necessarily be aware of.

And if you’ve never actually roleplayed before in an MMO context, you may not understand just how basic communication with another roleplayer works, or some of the common terminology people use when they’re roleplaying. It’s not incredibly complicated, and shouldn’t take very long to pick up at all. And it makes those first few interactions as a new roleplayer far less intimidating to think about. 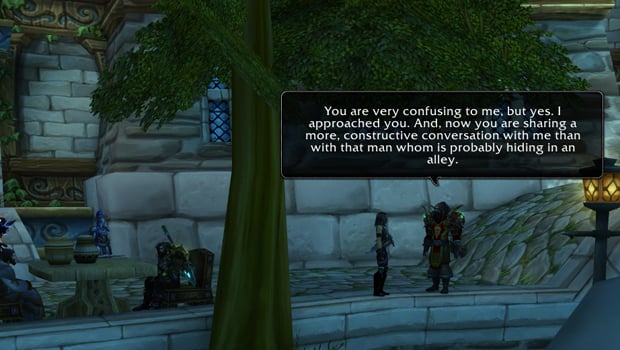 One of the first terms you’ll come across when you’re roleplaying is IC, or In Character, and OOC, or Out of Character. When you’re roleplaying, you’re “in character” — that means that everything you say aloud is spoken as if your character is saying it, not you. Think of it like acting — if an actor is on stage pretending to be a character in a play, they’re “in character,” and when they’re backstage preparing for the next scene, they’re out of character. When you’re speaking IC, there’s a few common ways to communicate.

If you’re in a roleplaying guild, some guilds use guild chat as an IC channel, and have a separate channel designated for OOC chatter, or vice versa — guild chat is OOC, and there’s a channel for IC roleplay. Some organizations or groups of guilds also have custom channels for roleplay chatter. Make sure you understand what the rules are for chat channels when you join a guild or group, just to avoid any potential slipups before they occur. 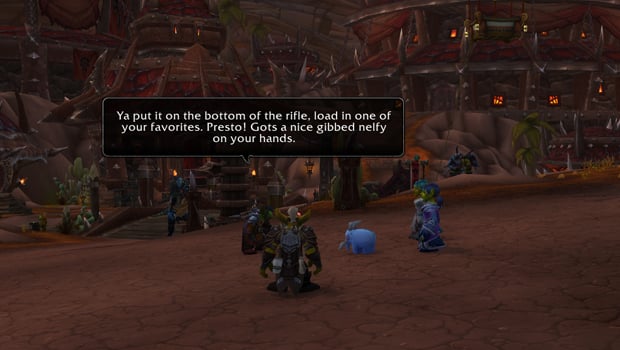 The single most intimidating part of roleplaying is also pretty much the backbone of roleplaying — talking to other people. It can be a little nerve-wracking to approach another player, especially when you’ve got no idea how they’re going to react to you. But that’s half the fun of roleplaying, it’s like improvisational acting, the kind without a script. Your reactions and your dialogue are determined by what that other person is saying, and how you think your character would respond to it. So how do you go about the awkward task of breaking the ice, without stepping on anyone’s toes?

Have a reason to say hello. You wouldn’t walk up to a random stranger on the street for no particular reason, would you? If you wouldn’t do it, why would your character? Finding a reason to speak to someone is pretty easy — just ask them a question. Ask them for directions. Ask them if they’ve seen a good place to grab some food. Ask them if they think it’s going to rain tomorrow. Ask them how they avoid a serious case of helmet hair, or if they know a good place to get armor repaired. If they’ve got a roleplay description, take a look at that and see if there’s anything obvious you can ask them about — if they’ve got a prized weapon or piece of jewelry, maybe ask them where they got it.

Don’t interrupt. If you see a group of people in an involved conversation, chances are they’re in the middle of an event or group activity. Barging in on the middle of a scene can be pretty disastrous for you, especially if it’s a pre-planned event and they haven’t made plans for anyone else to join in. In this case, you’ll want to observe from the sidelines, get a feel for what’s going on. And if you’d like to join in, there’s nothing saying you can’t ask to do so — send one of them a whisper, use OOC brackets when you do, and be polite. If they say no, then go ahead and move on — or stay and watch the show, if it’s entertaining enough!

React to what’s going on. If you’re nervous about breaking the ice, you can always sit in a busy area and throw out an occasional emote in reaction to what’s going on around you. Head to a local tavern and emote finding a seat, ordering a drink, sharpening a weapon, squashing a bug, or whatever else suits your fancy. Be forewarned though — you’ll want to keep the emotes occasional, so you aren’t spamming the room, and keep in mind that people aren’t obligated to acknowledge your character, no matter what they happen to be doing.

Always be polite. You get way farther in the world by being nice — and other people are far more likely to talk to you if you aren’t being a jerk. If someone turns you down for roleplay, it likely has nothing to do with you — they could be busy talking to someone else in whispers, they may have a scheduled event to get to, or they might just have to turn in early for the night. Shrug it off, move on, and find someone else to talk to. 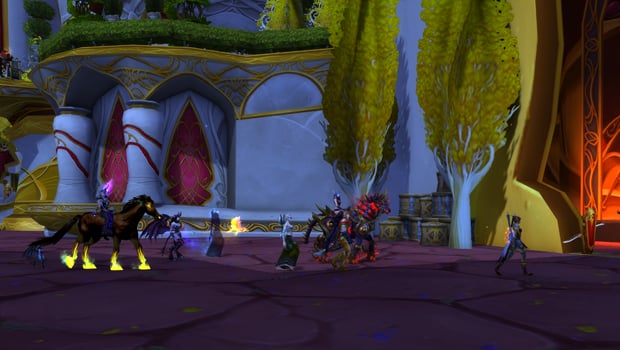 The other thing you want to keep in mind when you’re roleplaying is that contrary to what you might believe, it’s not all about you. You might think your character is the best thing since sliced bread, but another person’s character might have an entirely different opinion of your knight in shining armor. Maybe they’ve got a back story where they’re unusually frightened of paladins, avoid orcs with studious amounts of discipline, or maybe that particular character you’re trying to talk to is just a loner that doesn’t really go out of his or her way to talk to random strangers.

Speaking of which, I usually recommend that beginner roleplayers make their first character someone that’s fairly open, chatty, and friendly, as opposed to the sullen dark and brooding type. There’s nothing wrong with being broody — but it might not get you as much interaction as someone who appears to be open and approachable. Once you’ve gotten the hang of the general back-and-forth of roleplay, feel free to create another character just as sullen and subdued as you like.

Although this might seem like a lot to take in, keep in mind this is all in the name of fun. That’s what roleplaying is all about — having fun with other people, creating stories and seeing just where these crazy characters we’ve all created end up going with their lives.