Pet battles at the Darkmoon Faire 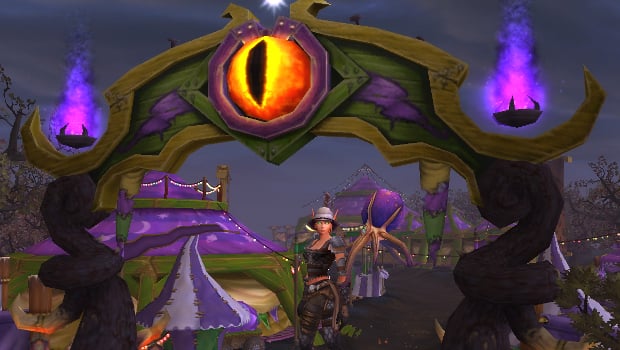 There is one place on Azeroth (well, we’ve been led to believe it’s on Azeroth) which is thicker with pets than just about any other. Come one come all, pet battlers, before you miss your chance this month, and get your pets from the Darkmoon Faire.

The very first pets obtained from the Faire came from a little orc boy, Flik, who sold frogs when the Faire was exclusively in Elwynn and Mulgore. He will always sell Tree Frog. His Wood Frog has a limited quantity, though a short respawn. You’ll have to find him running through the woods near the donkey paddock, behind the food court area. Also nearby, though not as mobile, is Morja, who will give you the quest for a Jubling as long as you’ve got 2 mugs of Dark Iron Ale. You have to get these from the fabled Bar in the Blackrock Depths instance, either direct from Plugger Spazzring or you can just steal them though doing so leads to a massive bar brawl.

The bulk of pets from the Darkmoon Faire are all traded for tickets. Lhara on the main concourse offers the Darkmoon Cub, Darkmoon Hatchling, Darkmoon Turtle, Darkmoon Tonk, Darkmoon Balloon, Darkmoon Monkey, and Darkmoon Zeppelin, each for 90 tickets a pop. The Balloon is worth singling out, because it’s purely a companion pet, so that should be the last one you try to obtain. Carl Goodup also sells the Darkmoon Balloon from his little cart full of different balloons, including an extra balloon toy. All of the battling pets are worth a look, but the Tonk and especially the Zeppelin get a lot of play time from me.

Tickets for Lhara’s pet selections are obtained by completing quests & other tasks for the other denizens of the Faire. I hope you like carnival games! 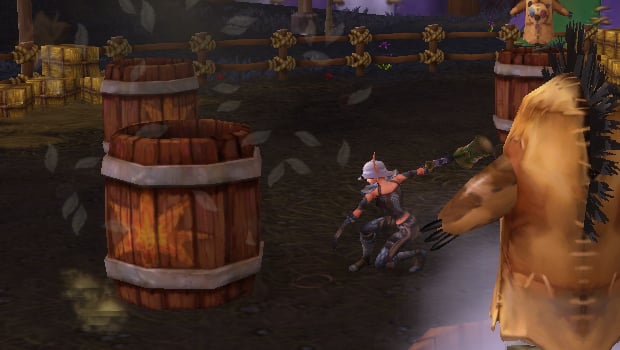 One of these games, Whack-A-Gnoll, is getting an update in patch 6.2, with the highly anticipated Hogs pet finally seeing the light of day. You have to score a whopping 45 points in one session of Whack-A-Gnoll to earn this iconic little biped. Luckily, the game itself has been retuned to be a bit more forgiving on the PTR than it is on live. I was able to get the achievement on my first go, though it was a close shave.

I had a far harder time snagging the achievement for the Race MiniZep added in 6.1. Personally, I ended up having to look through YouTube videos and scour the internet for alternate paths, because the one it looks like you’re supposed to follow is laughably different from one you’ll have to take to actually make it by twenty chimes in that Rocketeer. Its moves are very similar to the standard ticket Zeppelin, so if you’re getting too frustrated it’s not a key pet to get, battling-wise.

Another new addition for 6.2 is a new fishing currency which allows players to purchase a number of new things, including two new pets. The Sea Pony has been available as a very rare drop from fishing in the waters surrounding Darkmoon Isle for quite some time, but 6.2 sees the pool of typically caught fish almost entirely converted to Darkmoon Daggermaw. Daggermaw can be eaten (and traded!) like normal food, restoring a percentage of health & mana as opposed to a flat amount. However, it’s far more beneficial to hold onto them as currency. There are a number of things you can buy from new vendor Galissa Sundew with these fish, which you can begin catching with absolutely no skill, but you’ll get a lot of garbage catches until you level your fishing a bit. 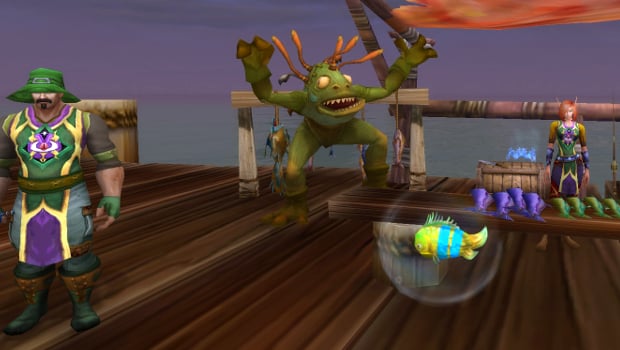 The 2 pets you’re looking for from Galissa are the Translucent Shell of the Ghostshell Crab and Blorp’s Bubble. The crab is fairly unique, both moves and model wise. Blorp is just unique model-wise, as another companion pet that can’t battle.

You’ll also have to be skilled in combat to collect some of the more elusive pets in the Darkmoon Faire. The most visible boss is Moonfang. She is spawned by killing wolves, which spawn more deadly wolves, and eventually, the Den Mother comes out to play. It’s a tough encounter for just a few players, but can be zerged down easily. She has a chance to drop the meme-tastic Moon Moon pet. The little wolves begin spawning an hour after Moonfang was last vanquished, so plan accordingly. Moonfang is an open tag and personal loot, so bring as many friends as you can.

A more ominous raid encounter, which requires a full raid and a holy hand grenade if you’ve got it, is the Darkmoon Rabbit. Unlike Moonfang, this encounter is regular tap and only drops a single Darkmoon Rabbit pet for the victor’s entire party. Roll for it. No sharing. PVP brawls and loot drama abound, and this little bunny is still going for 35,000-50,000 gold on the Auction House.

Lastly, there are four unique pets you can get through actually battling at the Faire. Two of these pets are wild. The Darkmoon Glowfly is a quite standard, get on out there and tame it style battle. The Crow is a bit trickier, in that it only shows up as a second or third pet in a fight. There are random, non-fighting critter Crows flying through the woods, but if you’d like to tame one you have to hunt down Glowflies that are high enough level to bring buddies to fight (ie, level 5 or higher). You’ll never know if you have even a shot at a Crow until you go ahead and start up a battle. 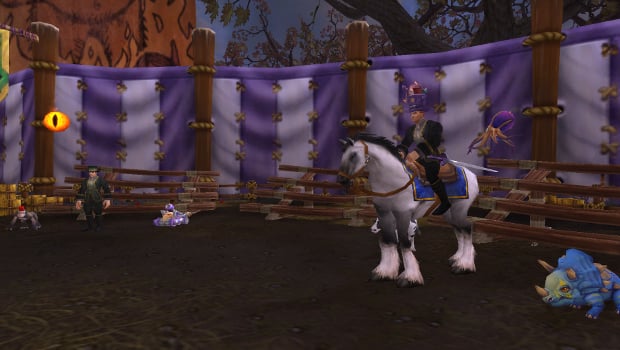 The two anchors of pet battles at the Faire are Jeremy Feasel (named after developer Jeremy Feasel) and Christoph Von Feasel (no relation). They both have a chance to drop a rare pet from their bags of treats — the Darkmoon Eye from Jeremy’s bag of pet stuff and Syd the Squid from Christoph’s.

For Jeremy, one of the best counters is the Mechanical Pandaren Dragonling, largely because of that big dodge Decoy. It can also pull double duty with its Dragonkin attacks against the Magic pet Judgement early on. By far the most annoying pet on Jeremy’s team is Fezwick, and Decoy can help you avoid his stuns, too. I’ve seen people favoring AOE teams here for that exact reason — AOE means Fezwick dies before he can even enter. Decoy also means you can technically carry a level one, but at this point I usually just go with a 3-team of the Dragonling, a Fel Flame and a high level, non-Critter backup because I just don’t want to redo the whole fight. If you’re having trouble, sub in a mechanical with Extra Plating in that last slot.

For Christoph it’s all about Mechanicals. That Mechanical Pandaren Dragonling is still solid choice in the first slot, though it’ll start taking lots of damage once Syd starts landing Whirlpools. Dragonkin with avoid moves that have shorter cooldowns, like Lift-Off, are a good choice, too. After that you want solid, heavy hitters because of shields, and because the last pet Otto has a big heal, you want to explode its face before it can get back up. Both of the last 2 pets on Christoph’s team are Beasts, so Mechanicals are the way to go. If you don’t care about carrying a pet, using Ion Cannon is a fantastic anchor, too. Pets with Wind-Up or Lock-On are quite popular because of Mr. Pointy’s shield.

Beware the eyes that blink and stare, but make it snappy because you only have one week every month before the Darkmoon Faire closes down again. Luckily, aside from the tamed and achievement pets, most of these can be traded. If your purple striped pants were at the cleaners this month, you can try your local neighborhood Auction House while you wait for the mysterious Isle’s return.