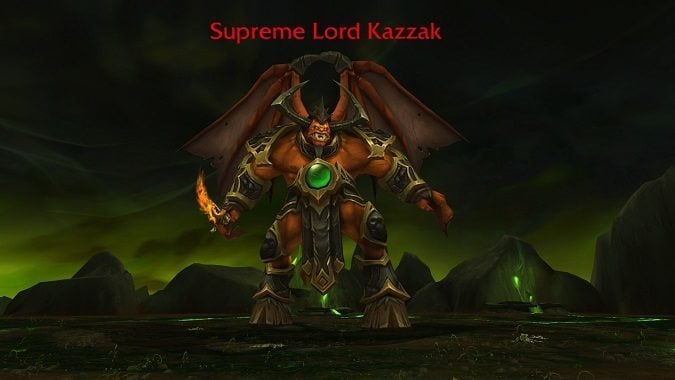 Did you know that in addition to Hellfire Citadel, a new world boss was added in patch 6.2?  Yes, standing atop the Throne of Kil’jaeden in Tanaan Jungle is our old and recently promoted friend, Supreme Lord Kazzak.

Compared to other world bosses, Kazzak is a fairly straightforward encounter.  He has four abilities, and only one of them involves switching to burn adds.  The biggest ability to watch out for is his Fel Breath — if the tank doesn’t face Kazzak away from the group, this will likely kill a decent portion of your raid.  Mark of Kazzak is mostly a test of how well your group can spread out but worth the risk if treated right, as it buffs the player’s damage and healing by 100% for the duration.  Healers will want to watch out for Supreme Doom, an ability that can be deadly if untreated but fairly easy to counter given the fact that Kazzak channels this ability for quite some time before going back into attack mode.  And lastly, as promised, the add ability: Twisted Reflection.  Unlike the adds from previous world bosses, these adds do not attack the group and have low enough health that a couple of strong hits will take them down.  The key is switching fast enough so they don’t reach Kazzak.

Overall, the fight seems much more forgiving than the other world bosses of Draenor.  While a lot of people from my group did die from Fel Breath on the pull, we still managed to take him down on our first try and I’ve since seen two more groups do the same.  For DPS looking to take down Kazzak, taking advantage of Tanaan’s double-edged Fel Sludge debuff will make the fight smoother, assuming all of the fight’s avoidable damage is actually avoided.  If you do die, however, the corpse run can be a little unforgiving.  When Supreme Lord Kazzak is defeated, he has a chance to drop item-level 705 trinkets, cloaks, wrists, or necklaces — and if you don’t get any of those, you’re still rewarded with a good chunk of Felblight for all your crafting/auction house needs.