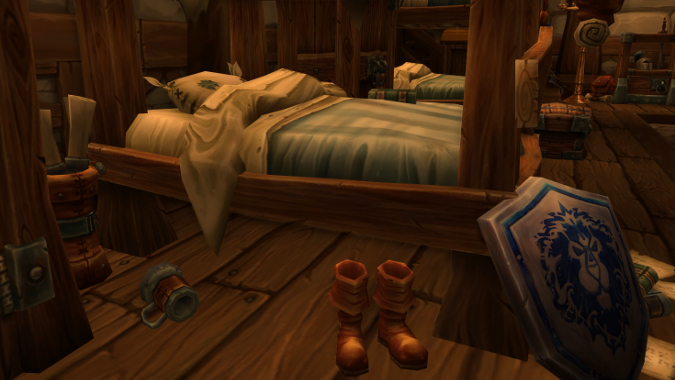 What do you think the best place in Azeroth to grab a nap is?

Probably an inn somewhere on the Exodar. I thought about picking some nice outdoor location, like a beach in Stranglethorn, then I remembered there are bugs outdoors and I hate bugs. I wouldn’t be able to sleep because I’d be thinking about bugs crawling on me. An inn in Stormwind might be nice, but I don’t trust Stormwind to not be overrun with rats. The draenei probably keep the Exodar free of both bugs and rats, so let’s go with that.

What would happen if Yrel offered sanctuary to all the Draenei in Outlands?

At this point, I feel like we should bring Yrel and Draenor’s draenei with us to Azeroth. Let the dumb orcs have Draenor, let Outland rot, and bolster Azeroth’s forces so the draenei can properly settle their portions of Kalimdor and better equip them to beat the crap out of the Burning Legion with us.

Do you prefer to do rep grinds all at once or in short busts over a couple days or weeks?

I don’t know that I prefer either one — I like having options. It’s nice to have activities I can spread out over the course of weeks/months and chip away at it over time. I also like having goals I can sit down and grind when I feel like it. I’m one of the weirdos that enjoyed the early Warlords of Draenor rep grinds. All I need to do is go out there and grind mobs for hours? Awesome! I love killing stuff! Grindy reputations means I can make as much or as little progress as I want in one sitting. I can make progress while watching something on Netflix (or YouTube) or whatever.

A good mix of activities will always be my preference.

Do you think Tanaan will keep people out in the world, or will we go back to our garrisons in a few weeks/months?

I don’t think anything will keep people out in the world forever. Nothing in World of Warcraft’s lifetime ever has. It will engage people for awhile — maybe a month, maybe two — and then most people will go back to their garrison. However, if we had no garrisons, I don’t think that would change. Instead of the garrison, it would be Stormwind or Orgrimmar.

I’m not sure measuring a piece of content in how long it lasts is useful; the better metric is how much longer until the the thing that comes after it. If we want a piece of content that lasts six months, what we’re really going to get is something with so many gates and hurdles it won’t let you complete it before the six months are up — which means you aren’t really going to be playing it so much as observing it little by little. If it lasts a couple of months, then we’re thin on content for a couple of months, that’s fine — as long as that thin-on-content period doesn’t turn into a full year. Of course, if a new piece of content only lasts a week, then two months until the next thing is still too long. Tanaan will last longer than that, though.

What do you think the penalty should be for employees who are late because they slept in?

Hey, I was late because of patch 6.2. I haven’t even played any of the patch 6.2 content yet — I was here making sure Blizzard Watch coverage is running smoothly for the patch’s launch. If you want a patch-sleep penalty, it’s a penalty on you guys. No posts for you!

Whats your take on the <local supplies> vendor that just happened to pop up in your garrison offering some nice items for gold?

She’s coo’. I don’t know who gave her permission to peddle her wares inside my super-important military-planning diplomacy-talks town hall — I would’ve asked her to wait outside with all of the other merchants, personally — but yeah, alright. She can sell me some stuff. Why not?