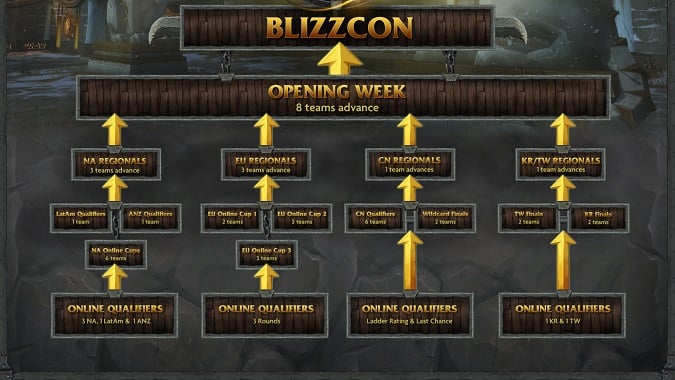 BlizzCon 2015 is steadily approaching, and with just over four months until the big event, the contests and arena tournaments have begun to appear. Signups are now open for the North American Arena Qualifiers, six winners of which will head to the North American Regionals.  The North American Regionals are expected to end mid-October and the top three teams will then head to Opening Week to compete against teams from across the globe.  The top four will then take the stage at BlizzCon 2015 and fight to win it all in the World Championship matches.

In order to qualify, the average Arena Ladder rating of the three highest-rated players on the team’s roster must be at least 2000 by July 9th.  The three online cups will take place over four days and will occur every two weeks beginning July 14th.  New to the tournament this year is the rule allowing teams to keep a four-player roster, which Blizzard encourages teams to keep this in mind when picking their rosters.  This new rule will hopefully result in players focusing less on how one specific composition matches against another and more on teams playing the best they possibly can.

Plan on getting your axe bloody or your spell fingers a-casting?  Head on over to the official blog post for full details, including a macro and script whitelist, elimination rules, and details on what identification will be needed to compete.  Good luck, fighters!