The Queue: I’m in Tanaan 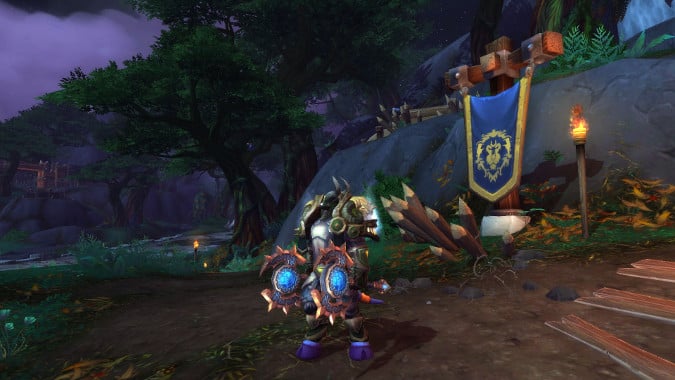 My second warrior just broke ilevel 650 in Tanaan – I’m still using a 615 trinket but all my other gear is 650 or 675 from Baleful drops/purchases, and I’ll have my first Empowered Apexis Fragment for him tomorrow. My first warrior is pretty solidly at 690 or better, with normal HFC gear as well as Empowered Apexis. Looking forward to Heroic HFC. I’m liking this patch quite a bit.

Let’s talk about the Queue, and the questioning and answering thereof.

Q4tq:  What’s the story behind the ilse in Lake Dumont?  I happened to notice it while trying to collect midsummer tokens, but the npc’s don’t talk ( at least to the horde).

Lake Dumont was added in the Cataclysm launch patch, and the characters there are tributes to people who’ve been involved in Blizzard games over the years. It’s a tribute to a specific team who’ve worked on Blizzard games, that’s all.

QftQ: What is some of the funniest guild names you’ve seen while playing WoW?

Some of my favorites:

There are more but they’re not quite PG enough for this site. I don’t like any that are skeevy or creepy.

Q4Q: did you remember to track oil? From currency tab, click on oil (and GR ofc) and check “show on backpack”

Nope. I don’t bother. I’m swimming in oil. I have so much oil I’m in danger of capping it.

“Here’s the obligatory “so 6.2 is the final patch after all, opinions, complaints?””

7.0 better be freaking awesome beyond human description for words!

7.0 better have rainbows shooting out of unicorns butts with zombies, hookers, and free 7-11 gift cards!

Frankly I think six months isn’t overlong at all for a patch. Six months to completely explore Tanaan on as many alts as I choose and raid Hellfire Citadel doesn’t seem at all too long in my opinion. Now, 14 months with no new content? Yeah, that’s too long. But six doesn’t concern me in the least.

If Blizzard intends on releasing expansion faster, we’re going to see fewer patches. That’s just the way it is. If we get an expansion announcement at Gamescom or BlizzCon, we’re looking at a year and a half expansion, which is significantly less time than Mists took.

6.2 has my guild members on in a less sparse fashion of late. I’d like to schedule a few events to ramble around Tanaan together, but I have a question. Lately, more than five of us have been on and wish to participate. When the sixth person asks to join, that invite would convert us to a raid group. Can we complete the daily areas as a raid? If not, how do other larger groups coordinate togetherness without competition for mobs/resources on the campaign to pwn the fel jungle?

You can’t do the quests or objectives in a raid group. This was answered in the comments but I’m putting it here so others get to see it.

Don’t you just hate it when you’re planning on doing, say, Zeth’gol or Iron Front for your Strategic Assault or Bonus Objectives for the day, and then Nimi (Parvink for Alliance) is all like “lolnope, go kill 20 demons”?

Still haven’t seen any sign of Tooth and Claw, either.

But hey, at least I killed a rare elite abyssal in the Felblight while killing imp packs and got a pair of cosmetic goggles for transmog.

The demon killing quest is annoying because demons are hard to find unless you take a group up to the Throne of Kil’jaeden. I often do the Ruins of Sha’naar to get as many demons as possible before I go hunting for them. I actually breathe a sigh of relief when she tells me to just kill Iron Horde, it’s just so much more manageable.

Q4TQ: Do you care if your character gets killed while out in the world? I mean obviously we all hate the run back, but do you clutch on to life with every ounce of your abilities, or do you realize you’ve overpulled and fighting back is just a waste of time and just get death over with?

I always pull every trick I can think of to stay upright. I watch cooldowns, hit any consumables I may have, use Gift of the Naaru and Die by the Sword, Rallying Cry, anything. I’ll run away if that is feasible. I know sometimes character death is unavoidable, but I make them earn it.

The reason I do this is because about half the time I manage to pull out a win and survive. Even if it’s only because I hit Intimidating Shout and then ran my butt off, I count that as a win.

Legit Q4TQ: When do we get more Tin Foil Hattery? I needs me some tinfoil hattery.

Also, FWIW, I actually really like Tanaan. It’s a marked improvement over the rest of WoD, the toys are fun, and there is a LOT to do, so much so that I can see myself happily puttering around in there for a couple months at least.

With the glaring exception of the Shipyard (which they appear to be making some much needed changes to) 6.2 finally delivered on what they said they’d deliver. Whether it’ll be enough, or too late, remains to be seen.

I can’t speak for Anne, although I suspect she’s working on some Tinfoil for you all, but as for me I’ll write one when I feel moved to write one. I wrote one for Diablo a while back, but frankly in World of Warcraft right now it feels like you guys can handle that just fine without me.