The Queue: All hail King Fox 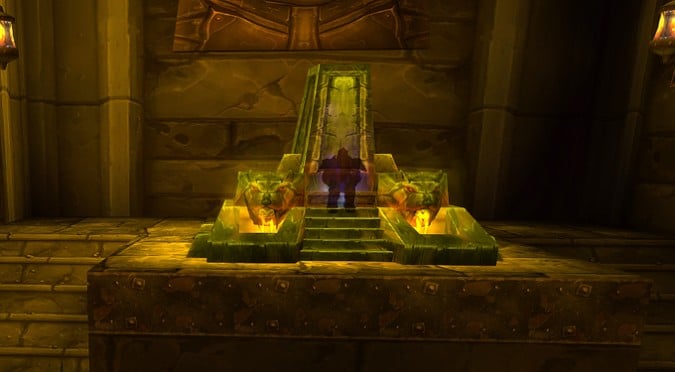 Fox VanAllen took his rightful place as the king of the dwarves last Thursday, or he would have if we were raiding Ironforge, and not the Vegas vacation of dwarf citadels. But he insisted on having his screenshot taken on the throne, so I am presenting it here as proof that yes, I did do as requested and take one.

QFTQ: If Blizzard are pushing the burning legion, whats everyone’s prediction on 7.0. Argus?

And if we’re lucky, home will still be the same when we get back to it.

Question for the Magnanimous Queue:

Which capital city do you think could use some sprucing up? Redesigning old zones takes a lot out of expansion development, but capital cities are fairly small, contained areas. Considering these hubs are the first major locations new players visit, investing some effort into updating their appearance and organization can go a long way.

The Exodar and Silvermoon. The Exodar primarily because it was established in a short story at the tail end of Cataclysm that the ship had been repaired and was functional, so having broken walkways and areas under construction really doesn’t make any kind of canon sense anymore. Silvermoon because by this time, you’d think Lor’themar would’ve gotten on that whole reclaiming the other half of the city thing. Bonus to revamping both — you could enable them for flight, something players have been asking for for ages, and maybe re-work the starting experience for both races a little more to better reflect current events.

Has the problem w/ previous expansions been that the expansion was too long or that the content drought after the final big patch was too long?

I think it’s definitely the latter more than the former. The longer you wait for content or story progression, the longer you have to sit and stare at what’s there. And the longer you sit and stare at what’s there, the more you get tired of it. It’s not that the content is particularly bad — Mists of Pandaria had a lot of really good things going on with it — it’s that you’re just incredibly bored with it, and boredom kind of breeds contempt. A full year of Siege of Orgrimmar was more than enough time for players to get incredibly sick of both the raid, and the expansion itself. Right now, the problem with Warlords is that there’s too much space between genuine content. Had patch 6.1 given us some story, some context, and some new content to do to push that story along, I think the timing of the expansion would have worked a little better.

Q4tQ: if we could name our mounts, like we can name our battle pets, what would you name yours?

I currently have 231 mounts, and I can tell you right now there is no way I could name them all. By the time I got halfway through I’d just give up and name the second half Bob. All of them. But! I do have one mount that I would absolutely name right away, and that’s my Swift Orange Raptor. Why that particular mount, you might ask? Because back in vanilla, it was the first epic mount I purchased for my priest, and it was a really big deal at the time, because she was Forsaken. Back in the day, way before rep grinds became something people commonly did as part of regular content, mounts used to be restricted by race.

They lifted that restriction during vanilla, and implemented a repeatable quest in patch 1.5 where you could turn in stacks of cloth for reputation with whatever Horde faction you chose (or Alliance faction, if you were playing Alliance.) At the time, I was still leveling my priest, but I was absolutely desperate to get her a raptor, because I didn’t like the way Forsaken horses looked. So while I was leveling I squirreled away every single last piece of Runecloth I could get my hands on, and I did every single quest that would give me some kind of reputation with the Darkspear — and there weren’t many of those at all.

Compound this with the fact that all Forsaken started out at Neutral reputation with all other Horde races, and what you ended up with, basically, was that I had to turn in roughly ~700 or so stacks of Runecloth to get to Exalted and get my mount. And I got my Swift Orange raptor, and I rode that little guy all over the place. And I called him Stanley, because he looked kinda like a Stanley. If I were going to name any of my mounts, he would be Stanley forever.

What visual and/or psychological trick makes it seem like flying on smaller mounts makes you move faster than on larger mounts?

It’s the run cycle animation — it’s the thing that tricks our brains into thinking that tauren move really slowly, or gnomes run really fast. They cover the same amount of area in the same amount of time, but they look like they’re going faster because the run cycle is sped up to compensate. With flying mounts, usually the smaller the flying mount, the faster its wings tend to go — larger mounts either don’t flap quite as quickly, or because they are so large, their wings are mostly off-screen or not entirely visible, so it sometimes gives the appearance that they’re flying slower. Oddly enough, the cloud serpents from Pandaria don’t have this problem, probably because they don’t have wings.

What are you expecting out of SDCC’s Warcraft movie teaser? Prepared to not be able to see it, AGAIN?

Absolutely prepared not to see it again, and anyone expecting to see it should probably scratch that off their to-do list unless they’ve purchased tickets to and are attending San Diego Comic Con. There’s a reason they call these things Con exclusives — they’re exclusively at the Con and not available anywhere else in order to sell tickets and get people to attend the convention. And it works, every year. If they made these announcements, teasers, and special sneak peeks available online, why would you want to go to the convention, pay the outrageous ticket prices, pay the outrageous prices for food, wait in line for hours on end, and mill around in a crowded convention hall with an almost suffocating amount of people?

It’s got nothing to do with the people that made or performed in the film — they have no say on what gets released when, or who gets to see it. It’s got everything to do with the studio that is promoting the film, and generating interest for the film, and how they’re going about doing that. That’s why you didn’t see the footage that was shown at last year’s BlizzCon anywhere, either. The studio wants to keep that stuff under wraps until they’re ready to reveal it. Until then, they’ll continue showing sneak peeks and special glimpses so people keep talking about it.