Breakfast Topic: How did you wipe your raid? 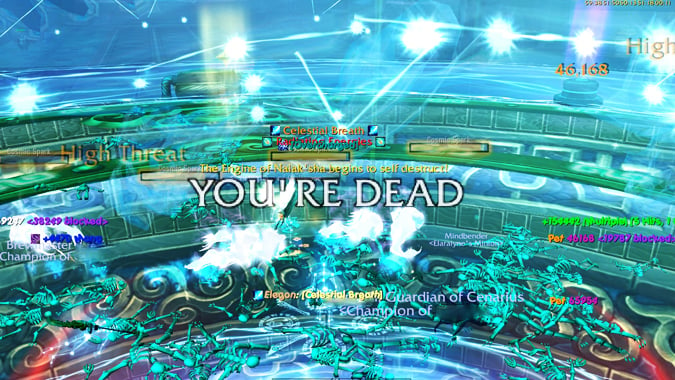 Have you ever wiped your raid? Of course not. But say, hypothetically, you possibly, maybe, might have life-gripped your tank out of melee range of the boss, causing Very Bad Things to happen? It happens sometimes, though we are loathe to admit it.

I’ll never forget it. We were working on Elegon in Mogu’shan Vaults, which was one of those hectic fights where different mechanics had to come together in order to win. One mechanic was that a tank had to be in melee range of the boss at all times, or Elegon would pull everyone in the raid to him with disastrous results.

Frustrations were palpable. The many wipes with little progression were starting to wear on us. Then it happened. I went to cast Prayer of Mending on the tanks, which I had keybound to Shift+Middle mouse button, and my next move was to use Circle of Healing, which was bound to CTRL+Right Click. Except that’s not what happened. Instead, I combined the two keybinds and ended up with CTRL+Middle button. This was Leap of Faith, and I had just pulled our main tank off of the platform to me, wiping the raid. I immediately switched Leap of Faith to something less accidental, and I have so far only repeated that unfortunate mistake once in the years since (a few weeks ago on Kromog), thankfully with less disastrous results.

It makes for a humorous story to tell now, but at the time I was mortified. So tell me, how did you wipe your raid? Is it a black mark that you still hide away, or do you tell the story with pride?

Blizzard Watch is made possible by people like you.
Please consider supporting our Patreon!
Filed Under: Elegon, Raid Wipes, Raiding
Advertisement