The Queue: All fear Korfax 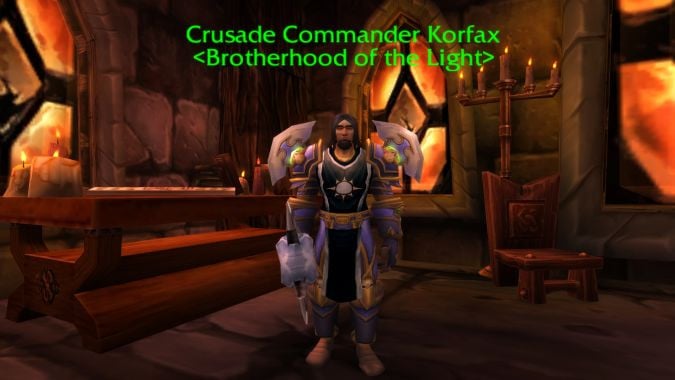 So if you saw the leveling stream this week, you already know why. And if not, you should watch it as soon as it’s available on our Youtube channel. Trust me. Trust me.

Lore Q4TQ: Can we actually permanently kill any major villain? See, with Archimonde being hinted at as being the same Archimonde as in WC3, and the Old Gods “never really dying”, it just seems like all we do is just beat any major villain back for a few years before they show up at our doorstep again. The only major villains we really seemed to have killed are Garrosh, Deathwing, Arthas and Illidan, and Blizz is apparently mulling over the idea of bringing Illidan back. How do we kill an Old God so it doesn’t come back? We apparently now have to kill any demon in the Twisting Nether to kill it for good, but how do we get to the nether without being either dead or demonic ourselves?

We killed Ragnaros, Al’Akir, Deathwing, Arthas, Malygos, Illidan. Lady Vashj, Kael’thas (he died in Magister’s Terrace) so yeah, you can kill major villains. As for Archimonde and the Old Gods, that’s a different thing entirely. We don’t really know what the deal with the Old Gods is — we know that Y’Shaarj died, but it was almost worse for Azeroth that he did, because his death created the Sha and tainted Pandaria for untold millennia. As for Archimonde being the same Archimonde as we fought before, I really don’t think that makes a lot of sense. But assuming that demons are linked to the Twisting Nether and can only truly die there, then yes, we’d have to go there to kill them. Since Outland is in the Twising Nether, we could always use it as a waystation to mount assaults on those demons we most want dead, I suppose.

Q4tQ: Finally read through the Well of Eternity series (slowpoke.jpg) and I couldn’t stop thinking about the fight between Malfurion and Varo’than.

In the book, Malfurion used Kalimdor to reject Varo’than and he melted away before being dumped into the Well of Eternity.

In the Instance, We killed him while Illidan was “Tanking” Mannoroth.

If the book is Canon as part of the MMO’s history and not the RTS, was the Instance a callback to the original version of how the Sundering came to be, or just a Lore oversight on Blizzard’s part?

Neither. It was us time traveling and then Nozdormu smoothing over any issues from our wanton disregard for causality in order to help us snag the Dragon Soul. He flat out tells you this. Anything that happens in the instance is us wiping our feet on the space time continuum and Nozdormu just sort of patching things up afterwards so nobody notices what we did. That includes the fights.

Is it just the first daily quest from the table that awards Oil?

That is correct. I’m told some people have gotten oil from bonus objectives. I am not one of those people.

Q4tQ: is it just me or are LFR times kind of extra wonky for HFC? I spent the better part of the past 2 nights waiting in queue. The estimated time would continually fluctuate between 10 and 50 minutes, and I was waiting over an hour before I had to log.

Also the queue popped twice, but someone(s) didn’t accept and it put me back in line ostensibly at the front, but I was still waiting for the rest of my alloted play time. Does anyone know how the LFG tool works when someone declines or can’t accept because they took an ill timed potty break. I know it doesn’t keep the rest of the preselected group together (for reasons that are still a mystery to me), but I’m not sure that what Blizzard means by “front of the line” is exactly the same thing as the rest of society.

Oh and FTR: I play a ranged DPS class. So I’m used to long queues, but this seems unusually excessive and I’ve never seen such schizophrenic variance in the time estimate.

I queue’d for LFR as a tank yesterday.

My queue did not pop. I waited an hour. I finished my Tanaan routine, logged off.

So yeah, I think something weird is going on, but no offical word that I know of about it.

Q4TQ: So, is the seemingly random host of the queue each day this week the new situation going forward, or was there just some one-off swapping?

I couldn’t cover the Tuesday Queue, due to a personal matter, and Liz covered for me. So I took her Thursday Queue in exchange. I don’t really get why it’s a big deal, but no, it won’t be the new situation going forward.

My question is: when the other groups don’t win the race — do they continue to strive for the final kill?

Usually they do. Remember, being the second guild in the entire world to kill the end boss of the expansion on the hardest difficulty is still better than 99% of the other players out there are going to do.

Matt was all PC today. He meant to say:

“And really, if humans and orcs got together, imagine how terrifying that would be for [gnomes].”

Okay, let me be absolutely clear with this.

The second the gnomes decide to cut loose, we are all in deep, deep freaking trouble. They’re geniuses. An entire race of geniuses. They’re not like goblins, who need to drink what is most likely powdered Old God taint to get their smarts on — gnomes are brilliant. They’re the one race on Azeroth who can combine science and magic, they picked up the Holy Light and priestly powers just by studying them. We should all be very thankful that gnomes are occupied fighting one of their own out in Gnomeregan. If they ever get organized and decide to do some conquering, they are going to conquer.

That’s me for the week. See you all Tuesday.