The Queue: He followed me home 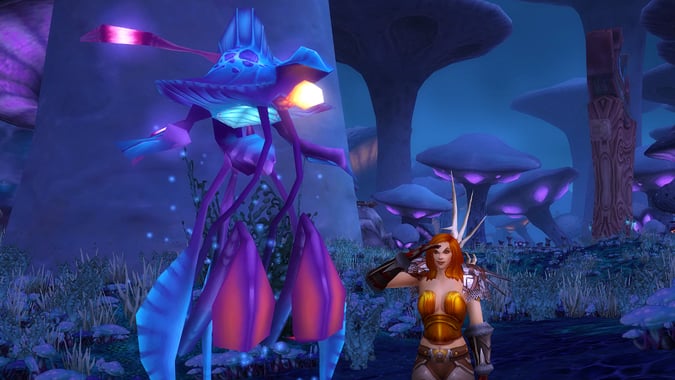 I’m catching up to what I missed with last week’s leveling stream and I found a new friend. Or he found me. He followed me home. I’m gonna keep him. I’m not sure how much of a fighter he’ll be, but hey, at least he’ll be useful for getting stuff off of the top shelf, right? I’m not sure what to name him yet, though. Or, you know, how he sees anything.

I don’t know, blizzard seems to not even care about class hall for some classes like rogues. Rogues get a sewer… now I feel like I might catch a disease in my class hall. I know we haven’t seen it but a sewer sounds insulting when we have ravenholdt manor just sitting there wanting to be used.

Well, when you consider that the last time we saw Ravenholdt it was on fire and covered in dead red dragons thanks to Wrathion, it makes the place a little less of a likely spot — although according to a post on Twitter last night, the devs have heard the feedback, and it’s something they’re going to discuss at the office.

I don’t really mind the idea of sewers so much, partially because I liked the little bar in Dalaran’s sewers, but mostly because the literal interpretation of a thief organization as being “underground” is something that pops up in a variety of games, like the Thieves Guild beneath Riften in Skyrim. If done correctly, it could be really cool. I’m not going to pass judgment on it until we actually see it in action.

QftQ: How much of the Artifact system that was revealed do you think will make it to live? They are proposing 36 unique weapons, each with their own talent tree with “meaningful” effects. It’s a massive addition and sounds like a balancing nightmare

Considering that they aren’t going to have to design and implement however many new weapons usually go into a new expansion, I’d say odds are good we’ll see all 36 exactly as planned. Developing relics as boss drops also feel like they’re going to take a minimal amount of time, because it’s not an item you can equip and visually see, from what I understand, it’s just something like a gem or an enchant scroll that you use on your existing weapon.

So there’s less modeling involved, and since there are less weapons all around, I kind of suspect it’ll make balancing those weapons a little easier, not more difficult. Plus, we heard very little about our own talent trees at all at the reveal. It sort of sounds like they’re going to focus on the weapon talent trees this time around instead.

Lore TFH Q4tQ: Gul’dan’s whole life has been the single minded pursuit of power. What would happen if he suddenly had all the power. Gul’dan is suddenly top dog across all creation…what does he do?

No really though, when your life is nothing but a mad race for power, I don’t think you really think about what would happen if you suddenly had it all. You’re too invested in figuring out how to get it all. I imagine Gul’dan hasn’t really thought that far ahead. Maybe he’d just rule the universe, flaunt his power over every being in creation, toy with puny aggressors just to amuse himself.

Q4TQ: So old Genn Greymane has had a trip to the stylist and gotten himself an image upgrade. Listed as one of Legion’s key players, what do we reckon, finally an advancement of the Worgen storyline or has Varian just finally turfed him out of the throne room?

Since we’re going to be dealing with the Emerald Nightmare in at least some capacity, and the worgen curse was originally a druid thing, I think we’re going to see at least a little worgen lore this time around. The fact that he’s been listed as a key player also hints that yes, we’ll probably see more of Genn. It’s about time!

With Demon Hunters only being able to be elves, are there any other race (or similar race) specific classes in lore?

Druids were only able to be night elves or tauren originally. That changed in Cataclysm, when worgen and trolls came into the picture, but worgen were pretty much a direct result of night elf druids, and trolls … well, trolls kind of work with their own version of what being a druid is all about, and have their own way of looking at the class.

Q4tQ: What’s the beef with Med’an? I haven’t read the comic, but just skimmed through his wiki page. His story sounds pretty cool, and I find myself hoping he’ll show up in Legion. What horrible truth am I missing?

Med’an is a half-human, quarter-orc, quarter-draenei who is the son of Medivh and Garona. He was introduced in the Warcraft comics series, and possesses multi-class abilities — he’s a shaman, a paladin, a mage, and who knows what else. He was also granted the powers to become a Guardian of Tirisfal, albeit temporarily. Basically, if he’s canon, he’s one of the most powerful beings in creation. He’s also a gigantic goody-two-shoes.

For a comic character, he’s really not out of line — I mean heck, look at any of Marvel or DC’s lineup of superheroes for examples of people with ridiculous abilities. For a character in game, he’s way, way too powerful. He’s a walking deus ex machina waiting to be utilized.