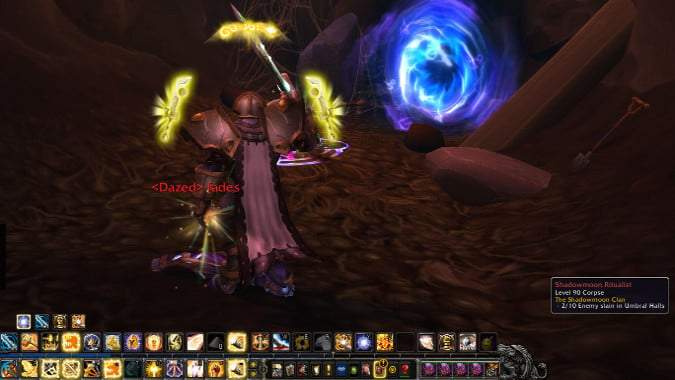 If there’s anything more annoying than having all of your proc based abilities light up after the thing you are fighting dies, I don’t know what it is.

Q4tQ: Any advice on prepping for Legion? Thinking of letting my sub run out unless I can figure out something to do. Any advice from anyone would be great. I have no interest in HFC. I’ve also capped my “mains” in Mythic Dungeons. I’m just looking for ideas on solo content that isn’t Tanaan. I have Pathfinder.

I have no idea what your transmog situation is or if you even care about the feature. I have almost every weapon I’d want to transmog over my Artifact in case I get one I don’t like, so basically I’m just doing a few mount runs and waiting for the next expansion. I raid with my friends, but that doesn’t take up a lot of time.

In terms of solo content, there’s non-rated PvP (we know the honor system is changing heavily, so now is the time to grind up honor to buy any honor gear you want before that changes), old raids and dungeons, leveling an alt (I’m working on a couple right now, as today’s header image shows) and honestly, if you’ve done the garrison campaign that’s about it. There’s Challenge Mode gear if you’ve not gotten that yet (since you’ve run a lot of mythic dungeons I assume you have) and the daily Apexis quests, but you don’t sound like you need that, either.

I’ll ask you this – have you completed all the quests from Patch 5.1 (Operation Shieldwall/Dominance Offensive) and 5.2 (Isle of Thunder)? That’s a lot of story you can do solo. Also, soloing Pandaria raids can be very challenging, as you don’t get the benefit of the stacking buff baked into lower level content on them. I have a friend who solo’s Throne of Thunder weekly, he has to work pretty hard at it. If you like a challenge, that’s available.

I hope Blizzard really learns from this going forward and focuses on some more soloable content.

In terms of prepping for Legion, I don’t think you’ll need to. The last couple of expansions I’ve been able to just jump into the new content even on alts I didn’t bother to play after hitting max level the last time out.

So I have a sort of Lore Question (which makes it too late, or too early, for Anne; I’ll ask it anyways):

So, Fel energy.  It’s fairly common knowledge that fel energy is a demonic thing.  It was all over in Outland wherever demons set up shop.  It also obviously powers demonic “technology” and can generally corrupt more or less everything.  Illidan and all of Felwood via Gul’dan’s skull, etc, etc.  But where did it come from?

It’s not an element like Fire or Earth.  Is it maybe a corrupt form of the Arcane, or possibly a twisted version of the Light (or Shadow?) employed by Paladins & Priests?  Is it simply what corrupts a Pit Lord, are they the source?  Or is Sargeras the ultimate source of it, or does he merely employ it liberally and find it in the Twisting Nether like we find water on Azeroth?

A lore question? Well, it’s too bad nobody else who writes The Queue ever writes anything about the lore of Blizzard games, isn’t it? Still, even though I’m not Anne, I’ll try and answer your question.

Fel is the force that destroys souls to empower itself. If you think of Arcane magic as pure, raw creation driven by will, Fel is its exact opposite – a seething chaotic power that annihilates the very life of those that it strikes. Warlocks who’ve done the Green Fire questline will be able to tell you of an exchange between Kanrethad Ebonlocke and a doomguard that explain some of this.

Fel magic isn’t from anywhere, exactly. It is what happens when you use the sacrifice of another’s life to generate magical power – essentially it’s the equal and opposite reaction to using the soul as fuel for power. Pure Arcane power (like that generated by the Well of Eternity) does not taint the flesh and flense the spirit as does Fel because it is free from the twisting necessary to essentially burn souls in this manner. Fel magic is inherently tainted because sacrifice of this type is inherently tainted, it’s destructive to the most primal force in existence, that of life itself.

However, don’t confuse Fel magic with Necromancy. They’re similar – they both deal in death to a degree. There’s a reason that the Lich King was created by Kil’jaeden, an eredar warlock. But necromancy doesn’t have to feed on the destruction of a life and the soul. Necromancy is magic specifically concerned with manipulating the dead, raising them into parodies of life, while Fel destroys (not imprisons or exploits) the very soul. One can use Fel to perform Necromancy, but one can also use another magical power source, such as when Arthas used the Sunwell’s potent arcane power to reanimate Kel’Thuzad. Necromancy is a school of magic, while Fel is a kind of magic.

The TL:DR is simply this — to use Fel magic, you destroy souls or sacrifice life.

How will Illidan react to someone who turns up with his glaives?

I don’t know how he’ll react in Legion, but I know he found the Warglaives fascinating when I brought them to the Well of Eternity dungeon some 10,000 years in the past. You can watch this video and see the exchange.

It pleases me that Sylvanas is listed as one of the key figures for Legion. Whatever she does, it’s likely to be interesting (though almost certainly not nice).

I’m also interested that Jaina is now mad and bad. Perhaps there is hope for my headcanon pairing of Jaina and Sylvanas.  No not THAT kind of pairing…though given that one of Jaina’s main functions has been to either be love interest or cheerleader for a laundry list of major characters (yes, I have run ICC far too often. Yes, I am thoroughly sick of her fawning weeping at Varian), it makes sense that eventually she’ll get round to Sylvanas.

All facetiousness aside, I’d be really keen to see interesting plot arcs involving those two.

The most interesting plot Sylvanas has seen in years was in War Crimes where she and Vereesa interact. I won’t spoil it, but it’s really good and kind of heartwrenching — I almost felt bad for the homicidal maniac for once.

As for Jaina, an angry Jaina is much more likely to turn Sylvanas into a candle via the application of fire than anything else. Personally, I’m not at all happy that she’s not going to be in Dalaran — she gets kicked out of her position as head of the Kirin Tor offscreen just so Khadgar, who has been sitting in Dalaran doing nothing for years, can take the job?

I want Jaina to get a huge story beat to make up for that.

Blizzard Watch is made possible by people like you.
Please consider supporting our Patreon!
Filed Under: Dalaran, Fel, Jaina, Sylvanas
Advertisement