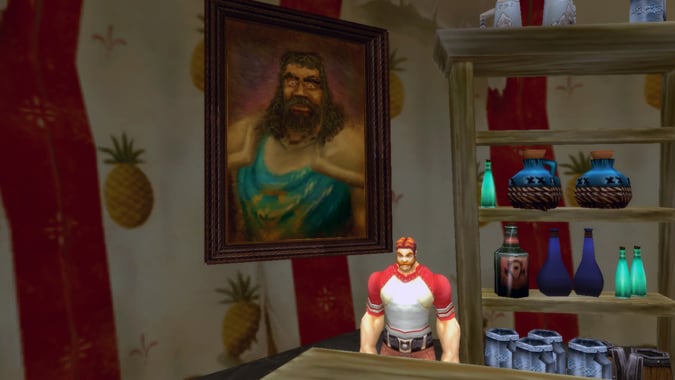 Sometimes when I go digging through old screenshots, I stumble across images that I simply don’t remember taking, nor why I took them. This is one of those cases, although I’m guessing it has to do with the creepy painting this poor guy has to deal with on a daily basis. Forget everything else and just look at that painting for a second. That’s a painting. That means that whoever was painting that portrait had to deal with the thousand yard stare the entire time he was painting it. No wonder the quality is a little low, I’d be in a hurry to finish the thing too, if I were the painter. But we have some questions we should probably be getting to, don’t we?

Question- with Dalaran coming back, what do we all think Blizzard is going to do with the Sunreaver’s Sanctuary/Silver Enclave portions? Most of these areas were Wintergrasp related, which won’t hold any relevance to us once we’re at the Broken Isles.

My tinfoil hat: Blizz is being secretive and is going to give us player housing in these areas, and will move the auction house outdoor to Sunreaver Square (in place of the Wrath tribute statue).

I imagine they will remain Horde and Alliance centered bases of operations — maybe they won’t be named for the Sunreavers and the Silver Covenant this time around, and maybe they’ll get a facelift in the meantime. Blizzard did mention something about the city being re-worked a bit for Legion, after all. But I doubt their purpose will change. As for player housing — as much as this is a thing I would dearly, dearly love to see happen, it’s been made clear that it’s not going to happen, at least not this expansion.

What would be the reasons for Jaina to be kick of her position? They definitely had to have a vote on it. And we know there r six council archmages… It makes u think…????

See what I mean? There are a million, million possibilities they could be going with here. Now I’m not saying it’s going to be something as simple or as ridiculous as a case of the sniffles, but they’ve probably got a good reason. A good enough reason, a plot-heavy enough reason that they felt they didn’t want to share it, for fear of spoiling unreleased content. Or at least that’s what I’m hoping for. We won’t really know until we hear more about the expansion.

On Blizzards landing page for Legion Sylvanas now has a leather piece covering her mid section and fore arms.  Any idea why they went with this change in appearance?  It looks awkward and out of place compared to the rest of her gear.

Perhaps she decided being stabbed in the stomach wasn’t a very appealing prospect.

Q4TQ : Is there any book planned by Blizzard to bridge into the next expansion like Tides of war or War crimes? I know Christie Golden is working on a book but it’s the movie prequel book so I doubt she’ll fit another novel in there in the next few months.

Unfortunately, we’ve heard nothing about any kind of new novels as of yet. Golden is working on the movie prequel novel, so it’s a good question — I’d love to see either Jeff Grubb (The Last Guardian) or Richard Knaak (War of the Ancients) write one, just because the expansion seems to be playing with characters that they’ve both written about previously. Grubb in particular — he only wrote the one WoW novel, and it’s one of my absolute favorites. I’d love to see him write another one.

Q4tQ: I like ranged classes in any game I play. In WoW, I mostly play Hunter and Mage and do okay at them, but I’m REALLY bad at Shadow Priest it turns out. (Which is a shame because I find their “flavor” so appealing.) It’s probably the multi-dotting, I guess. Would Shaman or Warlock would be a better sort of alt class for me?

If you really like the pew-pew aspect of Mage and Hunter, Elemental Shaman are really, really, really fun to play. Warlocks do a bit of both — they do have a spec that primarily focuses on DoT damage, but they also have that whole demon-summoning thing going for them. Destruction is a pretty fun spec that plays almost mage-like, however (but don’t tell the warlocks I said that! Oops, too late.)

Q4TQ: Blizzard has repeatedly referred to Malfurion Stormrage as the first Druid. They said this most recently in relation to the new Druid-themed zone in Legion.

But according to one of the legend scrolls on the walls of the main building on Elder Rise in Thunder Bluff, the tauren were the first Druids, before the night elves ever met Cenarius. But somehow they later forgot, and have only relearned Druidism in recent times.

Was that legend always non-canon? Has Blizzard forgotten about it? Or are they intentionally retconning it out of history?

Ooo, this is an old question but a good one. There was a lot of debate on this topic back in the day, and while the old posts are gone, it was stated that Malfurion was, in fact, the first Druid. Now you can take this a couple of different ways — first, the tauren legends are simply wrong, the night elves have the correct version of history.

Or, alternatively, maybe they’re both kind of right in a way. Cenarius might have taught the tauren magic, natural magic, druid magic, but never actually used the term druid to describe what they were doing. In this case, it’d sort of work both ways — yes, the tauren were taught by Cenarius, yes, they learned that style of magic. But the first mortal to learn and use the term Druid was Malfurion, making him the first “druid” — even if others may have practiced or learned that style of magic before. Since tauren history is mostly word of mouth rather than written down, it’s possible those scrolls weren’t actually written until after the tauren learned the name for the magic they’d been practicing from the night elves.