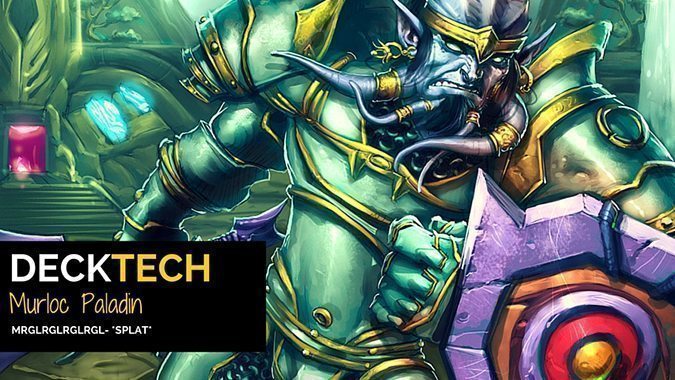 I hate it when Alex is right. I mean, he’s the boss and he’s usually right about everything. To be clear, I don’t have a problem with him being right as a principle.

But when he’s right about the use of Murlocs and how they don’t suck? That’s when my eye starts twitching like mad. Remember that Paladin deck I listed the other day on list of potential Grand Tournament decks coming up? I decided to take a closer look at it. I had a completely stable midrange deck so I opted to use that as a base. You see, the Murloc Knight provides an excellent board at 6 mana. You get yourself a 3/4 (which costs 4 mana), a 1/1 Silver Hand Recruit (2 mana from the Hero power), and a random Murloc from Murloc Knight’s Inspire ability.

League of Explorers update: This adventure added one key card: Keeper of Uldaman. This adds even more flexibility to either buffing your Silver Hand Recruits or nerfing opposing Dr. Booms (and other assorted big cards). Huge Toad and Jeweled Scarab are other potential drops but they don’t compete against the durability of a Shielded Minibot. You can toss a Warhorse Trainer and Garrison Commander to try them out though. Your game plan leans heavily towards board control now.

After biting my tongue and shoving my emotional disdain for Murlocs aside, I decided to see if I could turn this into something.

There are tons of options for players here. Toss your Equality, Consecration, and anything over 5 mana. Look for Shielded Minibots, Muster for Battles, Zombie Chows, and Knife Jugglers. You’re going to want that early game presence.

Warhorse Trainers and Garrison Commanders are two additions from the Grand Tournament set that will fit right in here. The 3 mana 2/4 Warhorse Trainers help provide a decent sized body against some of the early game threats you might face. Plus it gives you an excellent curve option as you can Hero Power on turn 2 (and assuming the Silver Hand Recruit survives), then follow up with the Warhorse Trainer and eliminate an opposing Knife Juggler or get in for some quick damage. Your Garrison Commanders simply allow you to use your Hero Power twice which comes in handy in the middle or late game if you’re out of cards to play (or simply have nothing to play).

The dream is for your Knife Juggler to land turn 2 in order for an inevitable turn 3 Muster for Battle follow up. If your opponent already had a minion on the board, you’re better off playing the Shielded Minibot first otherwise you’re going to throw away the Knife Juggler during the ensuing trade.

This is where things can get interesting. Aside from the usual Truesilver Champion, Piloted Shredders, and Sludge Belchers, Grand Tournament adds a few more cards to help bolster your mid game. By now, you should have a fair-sized board in play. With enough Silver Hand Recruits, buff them up with your Quartermaster. Keep maintaining board control. Your Truesilver Champions and Shredders should be trading against your opponent’s stuff.

Once turn 6 hits and your Murloc Knight enters play, you can start going nuts. If you can Hero Power that same turn turn, that’s three minions. And you might even pull a second Murloc Knight from activating the initial one. 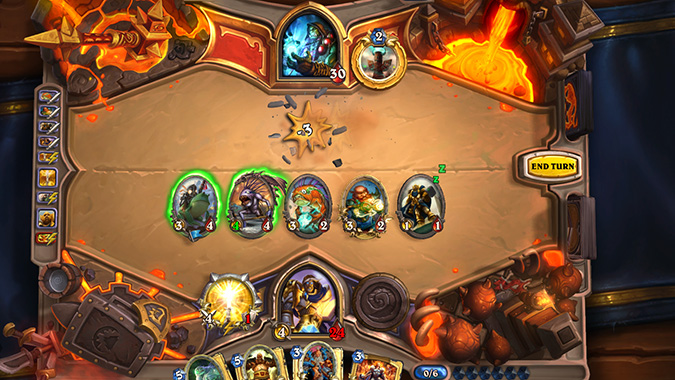 You have options for board clears. If you’re playing against a slower opponent, and you need to wipe the board without a Consecration, there’s the 3 card combination of Equality, Knife Juggler, and Muster for Battle. That almost never happens except at the most opportune times when you happen to draw into those pieces. If you need directed removal, Gormok should be simple to activate. I don’t advise playing him until you have the damage capacity to kill your opponent that turn or if there’s a threat on the board.

Ideally, your side of the board should be completely full of assorted Silver Hand Recruits and Murlocs. But if it isn’t, that’s okay because now your Dr. Boom and Tirions can start entering the fray. Gormok or the Ironbeak Owl can be held in reserve to help you bust through opposing taunt minions. Playing Justicar Trueheart will immediately change your Hero Power and buff it allowing two Silver Hand Recruits to enter the battle. 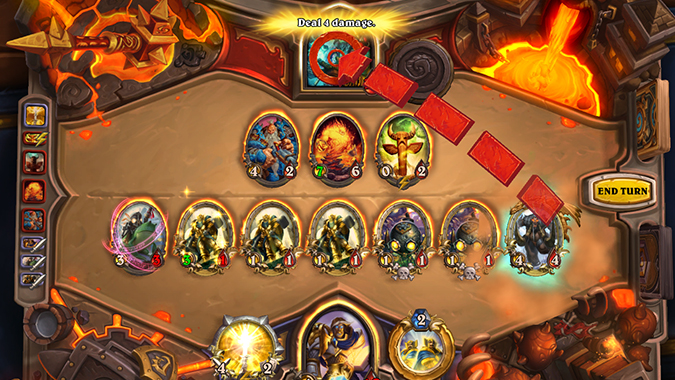 Most of these cards are fairly self-explanatory. You can consider adding a Mad Scientist in here, but the concern is that the death of the Scientist will trigger Competitive Spirit entering play without anything resembling a board on your side. The inclusion of a second Warhorse Trainer helps consistently buff your existing Silver Hand Recruits when they’re in play. Bolvar goes from dud to a sleeper pick based on the number of minions that die between the Recruits and any extra Murlocs created. If he’s in your hand at the right time, he can turn into a powerhouse the moment he enters play. Sword of Justice plays well with all of the extra minions but might not be worth playing on curve at turn 3 when you’re still in the early stage of securing board control. The Sword might be better off being played in the middle or late game. Divine Favor helps to net you extra cards against other control decks and to refuel your hand. Lastly, the Defender helps bolsters existing minions in play or can protect key cards like Murloc Knight from the opposition.

Druid: Combo and Fast Druid decks can still be lethal for you. Keep your health above the magic life total of 14. That Quartermaster of yours needs to buff your Recruits or else they’ll get Swiped away. Minimize any advantage they gain from Darnassus Aspirant and make sure it gets eliminated or else you’ll be playing catchup all game and Paladins don’t have much in the way of direct removal.

Hunter: Should be a fair matchup. Watch out for traps — likely to be either Explosive Traps or the new Bear Traps, so plan around both situations. You have the potential here to match them point for point. Expect your Muster for Battles to be immediately responded to with an Unleash the Hounds (but sometimes there isn’t a better option).

Mage: Rhonin has turned Tempo Mage from a neat deck into a devastating late game deck that can rip you and your board apart piece by piece. Your Owl should be saved for his deathrattle effect. Truesilver Champion attacks should go right towards Flamewakers the moment they land. Effigy is the new flavor so plan around that accordingly.

Paladin: The mirror matchup is largely going to depend on who manages to get their card pieces and go off first. If you can trade your Silver Hand Recruits against their actual cards, you’ll be in a much better position with card advantage as you progress into the mid or late game.

Priest: Dragon Priest is surprisingly tough. Many of my games against that deck went the distance and I was able to survive the onslaught long enough or I would not be able to bust through their defensive taunts and eventually get overwhelmed. This match might come down to your draw.

Rogue: Should be a fairly easy match for you to get through. I haven’t encountered too many Rogues on the ladder this week, but you can outpace and outlast them. Keep gunning for board control and don’t give them any targets for their Tinker’s Sharpsword Oil.

Shaman: This class just got much tougher based on the extra Shaman cards that landed with the Grand Tournament. Don’t overcommit too early as Lightning Storm can spoil your dreams. Keep fighting for board control. Fire Elemental will pick off some of your key minions but keep applying pressure. Imagine this was an arena battle in World of Warcraft, and pop any totems that appear.

Warlock: It’ll either be Zoo or Handlock as the majority of Warlock decks you run into. Against Zoo, you should have a slight edge in theory as you can either match their output of minions or survive just long enough to outlast them until they run out of steam. You’ll need some clutch Knife Juggling here t0 land on key imps (and not Imp Gang Bosses). Save your Truesilver Champions and target the Imp Gang Bosses or any Nerubian Spiders that happen to crop up. Consecration should be held to counteract Imp-losion if it connects for 4. Against Handlock, you should be able to reasonably swarm your opponent. Try not to go in for the lethal blow too early unless it can be done within one turn. Worst thing that can happen is you have them on the ropes before they bring down Molten Giants, taunt them, and then drop an Antique Healbot.

Warrior: Save your Equalitys! It’s one of the few ways you can swiftly remove and shut down the Grim Patrons. Their ability to power up their Frothing Berserker has a huge potential based on the number of minions you can play and it’s not uncommon for Berserkers to deal 24 damage in a turn enabling you to steal defeat from the jaws of victory.

I’m hopeful that variations of this deck can make it to the upper echelons of competitive play. It’ll be nice to see Paladins shine again. I just hope someone can figure out a better list that doesn’t involve Murloc Knights, however! In the mean time, I did manage to shoot up from rank 10 to rank 5 with the current list. There doesn’t seem to be enough time left to hit Legend with it sadly.