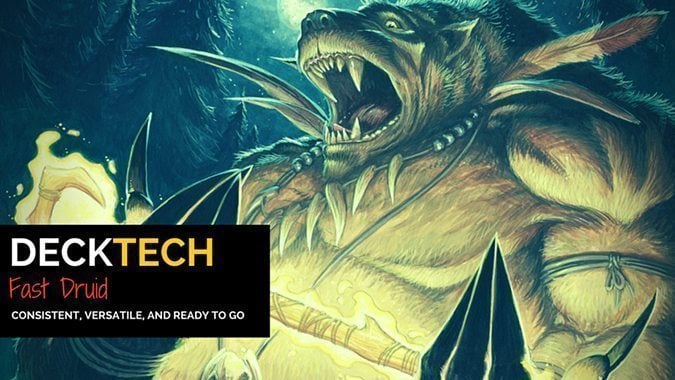 Out of all the fun and competitive decks out there, the Fast Druid is one of my favorites. This druid deck emerged as a strong deck upon the release of Blackrock Mountain but fell out of favor due to the rise of Patron warrior. Don’t confuse this deck with Ramp druid which relies on Innervate and Wild Growth to help bring larger minions into play.

The deck relies on efficient trading with your minions until your opponent can be bursted down with Force of Nature and Savage Roar (and doing the math, that’s a total of 14 damage with the three summoned Treants and the druid himself attacking). You’ll be relying on your mana cards to springboard some of your minions into play earlier than expected just ahead of the normal curve. This is a versatile deck where multiple cards can provide a response to different situations. Druid cards have the option to go one of two different ways (like Wrath or Druid of the Claw). Sadly, the deck is vulnerable to aggressive decks like Zoo or Face hunter. Playing Wild Growth on turn 2 means you’re forgoing establishing any early cards in favor of playing your bigger cards sooner than you otherwise would be able to. You also don’t have much in the way of clearing the board (not like Flamestrikes or a Brawl).

League of Explorers update: Mounted Raptor offers a slower, more midrange style to the Druid deck. It guarantees you another minion if the Raptor gets taken out and it comes in at an attractive 3 mana. Druids typically don’t have that many 3 drop options other than Shade of Naxxramas. From the below list, you can remove a Shade and a Kezan Mystic to include both of them.

The Grand Tournament update: This set added two major cards for Druids. Darnassus Aspirant provides yet another source of potential mana gain allowing a quicker transition to the late game. Living Roots gives added flexibility with a choice of two 1/1s or 2 damage directly to any early game minions. You can drop the Kezan Mystic, Sylvanas, and the Azure Drakes. If you want to play a more aggressive Druid, add in a pair of Fel Reavers for the Shade of Naxxramas.

Keep at least a Wild Growth and/or an Innervate. Other mulligan options will be covered in the individual class matchups at the end of this post.

Your early game should be focused on controlling and developing your board as much as possible. Try to sneak a Shade of Naxxramas in play and just let it sit there and grow. If you can Innervate out any of your bigger minions (like say, a Druid of the Claw on turn 3 or a Dr. Boom on turn 5), take the opportunity and do it. You’ll want to apply some pressure to your opponent and have them deal with your threats. These are normally cards that are played later in the game that they would have to find a way to deal with right now.

Should you coin out Wild Growth?

This is one of the more common scenarios druid players will run into. You have a Coin and a Wild Growth in hand and you’re not sure if you should play them both immediately on your first turn. The general rule of thumb is to coin out Wild Growth unless you have a Shade of Naxxramas in your hand to begin with (or something beneficial to do on turn 3).

If Emperor Thaurissan is able to stick around for even one turn, it’ll cement your advantage even further due to the cheaper cards in your hand. Your Piloted Shredders, Azure Drakes, and Druid of the Claws should now be hitting the board. Ideally, that Shade of Naxxramas should still be sitting around there biding its time. Keep it stealthed. Don’t break its cover just yet. You’ll want it to help set up your coup de grace when your combo pieces are in your hand. There are a number of different ways for your deck to cycle through its cards until you find what you’re looking for between the Drakes, the Wrath, and your Ancients of Lore. Your Druid of the Claw comes with a charge allowing it to quickly remove a minion from play but you’ll usually want the guy in bear form. 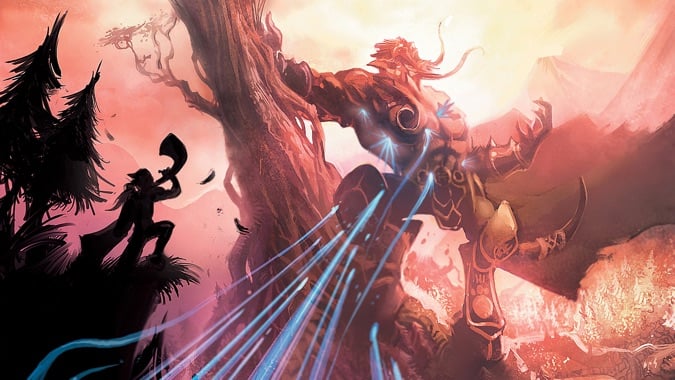 When you play this deck, do not tunnel vision. Its common for players to think of 14 as the magic number when Force of Nature and Savage Roar will finish the game. Work on gradually whittling your opponent’s health down but don’t needlessly sacrifice your minions. The more minions you have on the board, the stronger your combo will be at the end. Thankfully, there are multiple ways to victory. If you don’t end up drawing your combo pieces to win, Dr. Boom, Sylvanas, and the rest should hopefully help overrun your opponent. Turn 9 should be where most games end as you’ll pull into range of your combo coupled with whatever remaining minions your have available. Math out the amount of damage you have available (including your hero).

Cenarius can help add some much needed board presence as early turn 4 if you happen to catch lucky Innervates (and a Coin). More often than not, he won’t be able to come into play until turn 9. By then, you should already have some minions on the board. You can use him to provide you with a few taunted up Treants to run interference for your other minions or pump up existing minions in play.

Personally, I’m at a point in the season where I add Kezan Mystic into the main deck (and you’ll see it in my deck list above) but some people don’t like doing that and you can slot in something else instead. It gives you a slightly higher edge against hunter and mage decks.

Running a single Zombie Chow isn’t a bad idea especially if you’ve come across a ton of aggro decks with smaller minions. The Chow should be able to trade for at least 1 minion (though usually 2 due to the higher health).

Harrison Jones or The Black Knight can be inserted in lieu of the second Azure Drake to provide extra support against specific deck matchups (like warrior decks or Handlock with their huge taunt minions).

Hunter: Keeper of the Grove, Wrath, and Swipe are excellent cards to find in your opening hand. if you subbed in Zombie Chow, he will be your best friend as it lets you trade against their Leper Gnomes or Worgen Infiltrators. If you’re stuck with a Force of Nature in hand, it’s okay to cast it early and attack into opposing minions to keep the field clear and neutral. The Savannah Highmane ends up being one of the bigger threats and other than Sylvanas, there isn’t much you can do against it other than silencing it with one of your Keepers.

Mage: Ugh, I hate playing against mages here. Mirror Entity will almost always catch something good from you. This is where that Kezan Mystic comes in handy. Freeze Mage will have a tough time dealing with your constantly growing army of minions. Mech Mage might have a number on you so try to mulligan for a Wrath.

Paladin: This matchup should go your way fairly easily. Most paladin decks end up being the Midrange variant. Your Swipes will be perfect in countering their Muster for Battle. Save your Keeper of the Grove against their Tirion. Don’t overcommit onto the board for fear of the dreaded Equality and Consecration combo.

Priest: The priest matchup should be good enough. Shadow Word: Pain and Shadow Word: Death won’t be able to touch your Druid of the Claws, Azure Drakes, or your Piloted Shredders allowing free rein for them to feast onto opposing minions.

Rogue: Focus hard here on trading and clearing out their board. Keep removing their minions. Sap can set you back in a huge way if it connects.

Shaman: Mech shaman has the ability to give you a tough time. You won’t have as many efficient ways to clear multiple totems (or other minions) since you need an Azure Drake in play just to help boost the power of your Swipe. Mech shamans will attempt to place as minions on the board and then supporting them with numerous damage spells to keep them safe. Use caution and bait out the Hex with a Druid of the Claw before playing Dr. Boom or a Cenarius.

Warlock: There are two types of warlocks you’ll run into here: Handlock and Zoo locks. Against Handlock, you want to chip their health down to around 21. Don’t go any lower until you have the burst damage to bring them down. Hold your Keepers and Big Game Hunter against their taunted up Molten Giants and Mountain Giants. Against Zoo, your best bet is to try to survive the opening rush. Mulligan for your Wrath. If you managed to pull Swipes, save them to use against any Imps that come into play due to Fel Imp-losion or Imp Gang Boss. Ancient of Lore will buy you some more time if you need it (so long as you pick the life gain). Big Game Hunter is crucial in either matchup against giants or Mal’Ganis.

Warrior: The warrior matchup is one of the worst for you. Patron warrior has the ability to dismantle the druid before turn 9 even arrives. Swipes are ineffective against Grim Patrons. Hope for an Innervate and an early 3 or 4 cost card that you can play early on to apply pressure. Wrath should be used to remove any Acolyte of Pains that do hit the board. Don’t overcommit too much here because of Brawl.