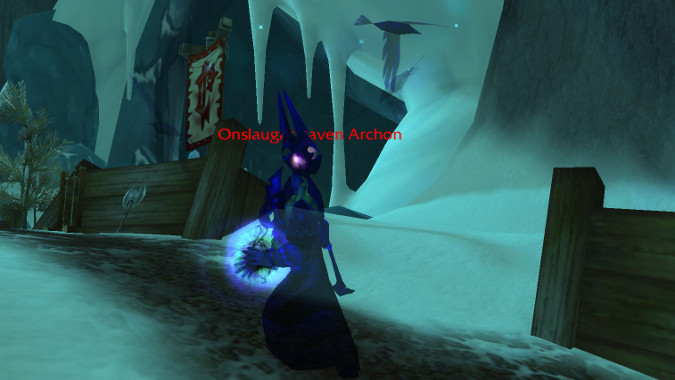 It’s the weekend, it’s Queue time, let’s do this. You and me, commenters. We shall breach the veil and release horror absolute. Or we’ll talk about Blizzard and the games they make. One of those.

Q4tQ: On Draenor we found shadow priests that follow a shadowy dread raven god. On Azeorth, we saw Scarlet Crusade shadow priests who called themselve raven priests and had shadowy ravens instead of the usual shadow orbs. Conicidence?

Honestly, it’s a cool theme and based on stuff we found out on Outland, I wouldn’t be surprise if there’s a connection.

“Most specs are getting overhauled, tweaking them to fit the fantasy of the spec. Some will be renamed.”

Which spec do we feel needs to get renamed? Personally I don’t like there being two specs named “Restoration”. What names should be changed?

Any specs that are named the same as another spec some other class has should be renamed. Prot Warriors should be Juggernaut or Dreadnaut, Prot Pallies should be Aegis or Champion, Resto Shaman should be Far Seers, Resto Druids should be Resto Druids (I’m sorry, it just works for Druids.)

So we shouldn’t have Frost DK’s and Mages, but maybe Hoarfrost DK’s and Ice Mages. I just don’t like that kind of duplication. Maybe Mages should get to keep Frost because they had it first.

As for switching names because they don’t fit a spec, I get the reasoning, but I can’t think of any I’d change for that reason.

Q4TQ: In the screenshots of the Paladin artifact weapon, the text for Purified Ashbringer says “Magni Bronzebeard forged the original Ashbringer, and he can forge it anew to make it strong than ever”. Do you think  they found a way to lift the curse that left him petrified under Iron Forge? Perhaps a goblin looking to make a quick coin sold them his (gently used) Refleshifier? Maybe we use a Pillar of Creation to free him?

It’s just flavor text. Moreover, it’s flavor text on a mock up for a presentation months before we even have an announcement of a Beta for Legion. Someone in Blizzard’s art department whipped that up so they’d have something to show us. We in no way have any confirmation that Magni’s coming back. Until we do, I’d stay calm and not assume he is. As of right now, Magni is a statue.

Rexxar trailer for Heroes is up!

In tribute to the awesome in-joke in Rexxar’s dialog, learn these lyrics now. You will be singing this while you play him.

Qs4tQ: Some questions on the new hunter specs… Is it true that there will be no pets at all for marksmanship? Will survival have some ranged skills?  Will other specs have some melee skills again?

I am all about having a melee spec for a hunter, but they SHOULD have some (albeit less powerful) ranged abilities.  This is core to what a hunter is.  Same goes for the pet, while I am fine with having a way to spec where no pet can be more beneficial, it SHOULD always be an option to have the pet.

As far as we know as of right now, Survival is pure melee only, Marksmanship is pure ranged with no pet. Frankly, I’m actually looking forward to Survival now. But Survival gets Harpoon, which is similar to Death Grip and lets them pull mobs in. (According to Elvine who was livetweeting the WoW panel at DragonCon.) I guess that counts as a ranged attack.

I said I was going to talk about why I want us to go to Argus today.

Blizzard Watch is made possible by people like you.
Please consider supporting our Patreon!
Filed Under: Raven Priests, Wolves And Being Hungry Like Them
Advertisement