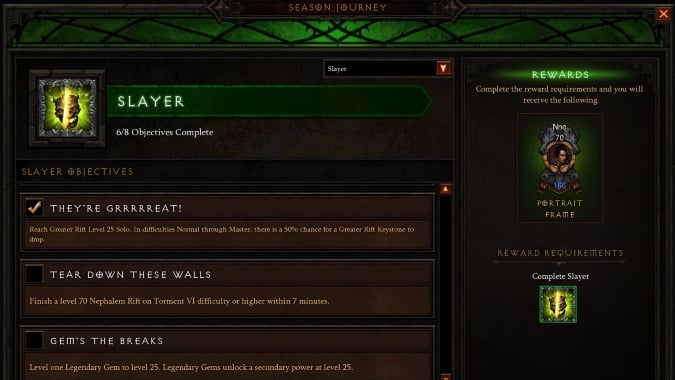 Diablo 3’s Season 4 came out with seasonal objectives, a way for seasonal players to explore various areas of content in the game while on their way to earning cosmetic rewards. Some players will stop at just one level 70 for that Heroes of the Storm mount. More players will complete at least Chapter 4 of the seasonal objectives so they can have that Diablo 3 pet and portrait frame.

But the seasonal journey doesn’t stop at Chapter 4; that’s only half of it. After number four, the chapters become named and more formulaic as they push you deeper into the content: Slayer, Champion, Destroyer, Conqueror, and finally, Guardian. Let’s see what each involves and how best to finish them off.

Slayer looks almost like a continuation of Chapter 4, except some of its objectives are a little more extreme than the previous chapters. Slayer continues with your collection of legendary powers within Kanai’s Cube and it pushes you to go defeat the Uber bosses in the realms unlocked by the Keywardens’ infernal machines. You’ll learn to either get lucky or transform some yellow items into legendaries to fully equip your follower, which means you’ll probably have learned to farm Death’s Breath in order to use that particular Cube recipe.

Four objectives from Slayer form the backbone for the later titled chapters:

Champion wants you to defeat the Soul of Evil, which is the Uber boss that combines and randomizes the other Uber bosses in its own encounter, and also on a much higher difficulty than when you defeated the previous Uber bosses from Slayer’s objectives. The Soul of Evil drops the fourth legendary crafting item used to make the often best-in-slot Hellfire Amulet.

Destroyer departs from Hellfire Amulet activity and adds in achieving conquests. You can earn regular achievements for your seasonal as you play, but conquests are specific and very difficult challenges made just for those chasing leaderboard glory. The first 1000 players to finish a conquest get recognized forever on the conquest leaderboard for the season; if you don’t make the first 1000, then the conquest just counts as more achievement points for the season.

Completing each new chapter beyond Chapter 4 gives the player a new portrait frame to show off. Each portrait frame for Season 4 still has the wolves on top, but the circle around the character portrait changes color and texture. Slayer rewards a tan, almost wooden circle. The next three look metallic: Champion is bronze, Destroyer is silver, and Conqueror is gold. Guardian is a unique fiery and spiky border.

The order of splashes and progression through the chapters can feel a bit off. The first four chapters can lag in a few different ways. On the one hand, if you speed level a character to 70 for the first time, you’ll suddenly have a lot of time just sitting in town leveling your artisans or equipping random items on your followers to get the check marks done. On the other hand, if you level slowly, you’ll have the reverse effect where you’ve maybe done all the artisan leveling and even beaten the game on Master difficulty, but you can’t see past chapter two because you’re not level 60 yet. It slows down some once a player gets to Slayer, but the chapter still seems to split and stagger into the next chapter. 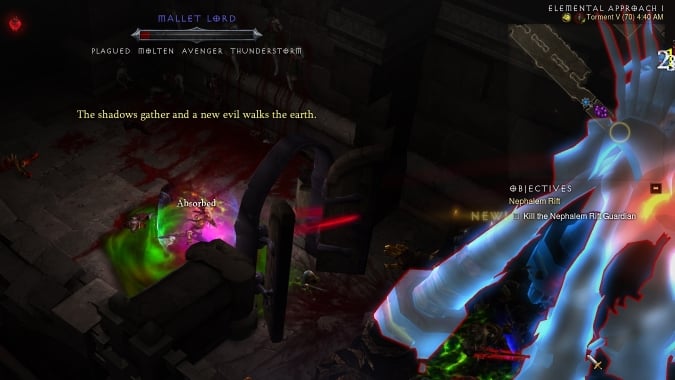 For example, there’s an objective to reach Greater Rift 25 solo. The way Greater Rifts (GR) are now set up, every three levels until Torment 6 is an equivalent to another game difficulty, then it’s every five levels:

This new equivalency is a little useful in a related case. Since there’s no obvious timer on the regular Nephalem Rift progress bar, you can use an equivalent Greater Rift to see how well you’d do when reaching for an achievement or seasonal objective for a timed Nephalem Rift run on some Torment level. There’s a Slayer objective to do a Torment 6 Nephalem Rift in under 7 minutes, so you can run a level 25 Greater Rift over and over with some idea of how far off you are from completing the objective. This is a bit weird because you’d probably be running higher Greater Rifts for legendaries and also gem upgrades if you can do level 25 in under half the rift limit time.

At first there’s a oddity with one of the last Slayer objectives to complete — level a legendary gem to level 25. The legendary gem level 25 makes poetic sense with the reach Greater Rift level 25, but it doesn’t make much practical sense at first. Upgrading legendary gem ranks is directly related to what level Greater Rift you are running. At 10 rift levels higher than the next gem rank, the chance to upgrade becomes 100%. The chance to upgrade decreases by 10% per level until 60%, until you get to even levels rift/gem where you have 30%/15%/8% chance to upgrade +1/+2/+3 levels. (Confused? There’s a calculator for that.)

If you want to level a gem to 25, having 100% chance to upgrade the last three ranks means you’re running a level 34 or higher rift. That’s completing the Champion-level Greater Rift objective and being halfway to the Destroyer objective. The objective becomes much more reasonable if you accept 60% chance to upgrade, because while the upgrade might fail some of the time, you’re only running Greater Rift 25-27 for those last three ranks.

There are objectives in Guardian like completing Greater Rift 60 solo or completing a Torment 10 Nephalem Rift in under three minutes. Greater Rift 60 on solo class leaderboards is often the start of the leaderboards (so, rank 1000) for softcore characters and the middle or top of the leaderboards for hardcore characters. Torment 10 is as high a game difficulty as you can currently get in Diablo 3 and doing a rift in three minutes means you’re completing in under one fifth of the allotted time. There’s leveling three legendary gems to level 60, which probably requires either a group or solo class leaderboard spots if you want decent upgrade chances.

But then there’s an objective to kill Greed on Torment 6 or higher. Greed, Baroness of the Treasure Realm, is the boss in the Vault, an instance you can get to when a treasure goblin rarely spawns the portal on death. This is one of those objectives that you could potentially get back in Slayer objectives, if you run into the Baroness by chance. But, since encountering the Vault portal at all is a very slim chance, the objective might be way up in Guardian so as to not prevent players from moving through earlier chapters just because of small RNG.

But there’s one Guardian objective that I can’t think of a reason for being in Guardian and not before: Reach level 70 in Hardcore. This is extremely odd to look at as a player with a hardcore seasonal character currently 6/8 in Slayer objectives. Playing a Hardcore seasonal character means you got this objective done way back in Chapter 3, before you even got the seasonal base portrait and pet. Why is it all the way up in Guardian? Even if you aren’t a regular Hardcore player, playing all the way to the other Guardian-level objectives indicates an amount of skill and patience where it ought to be trivial to reach character level 70 without dying.