You might be a diehard Nephalem eager to climb the leaderboards once more. You might not have played since the expansion Reaper of Souls came out. Maybe you don’t even play Diablo 3, but you play Heroes of the Storm and you want that fantastic phantom pony. Regardless of how much you’ve played in Sanctuary, when Season 4 starts next Friday evening, we all start at level one.

While I want to encourage readers to learn to love Diablo 3, I understand the urge to complete a cross-promotional objective as quickly and painlessly as possible. So let’s look into speed leveling methods that can not only get you quickly to 70, but also help prepare you for experiencing the new endgame.

A term used interchangeably with speed leveling, power leveling often refers to the party activity, while speed leveling often refers to the solo activity. In power leveling a higher level (often max-level) and well-geared character carries a lower level character through the leveling experience. This requires a minimum of two players, at least one high level and at least one low level, though you can have any combination in a full 4-man Diablo 3 party as well.

Power leveling is definitely the fastest method, because when planned out and done correctly, a player is often leveled from 1-70 within an hour or less. At the very extreme end of power leveling is insanity such as less than one second per level. However, power leveling requires highly geared players and often hunting for specific game events, so while the actual leveling doesn’t take long, this method takes the most preparation.

If you are being carried through leveling, your focus is survival. It helps to be aware of what waypoints you’re going to be using, so power leveling parties often use voice chat, such as Mumble or talking through a streaming service. The carried player will sit at the relevant waypoint, soaking up the experience in safety, while the more powerful carry player goes out on the level to kill as many monsters as possible in a short amount of time.

Whether you’re being carried or doing the carrying, be aware of the party terms for this activity. Do not participate in power leveling that requires you to pay money for or be paid for — it’s against Blizzard’s End User License Agreement (1.C.iii.) and your account may be banned. 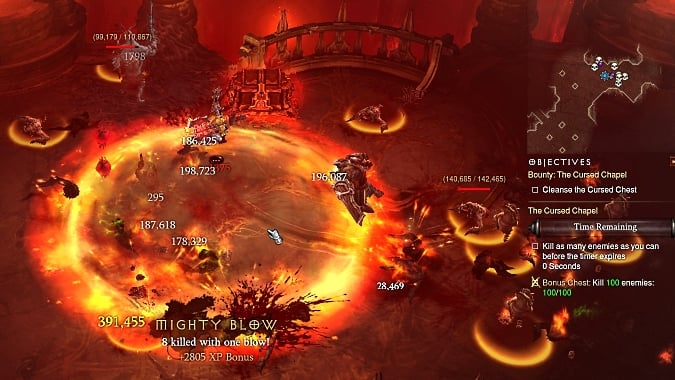 Instead of relying on the power of another high-level character, speed leveling relies on a player’s own pre-planning of the class they’re going to play, as well as specific knowledge of aspects of the game, in order to level as quickly as possible. You’ll want to equip extra experience-granting gear as you find it, and you’ll want to keep ruby gems around, as they increase bonus experience by 10-33% when socketed into a helm. Remember to pick the Templar to help heal you through mob packs.

While power leveling is insanely short in time spent, the following two routes are the most widely-accepted speed leveling methods. Experienced speed levelers will often clock in around 5-6 hours played, while cold starts with less pre-planning can clock in at around 8-9 hours played. Time difference in routes is most affected by player pre-planning; spending a lot of time staring at tooltips is not going to help you level.

Both methods focus on maps with high monster (or mob) density, an important concept in Diablo 3’s endgame. Mob density refers to how many monsters are in the area such that you can efficiently stay in combat while you’re traveling on the map. Another concept is “pulling,” which is what WoW players might call chain-pulling, where you drag or kill monsters from one pack as you move and pull the next pack. Low mob density happens when you can’t pull mobs packs very well, usually implying packs, if not separate mobs, are too spread out. High mob density means you can stay in efficient combat for almost the entire rift or bounty. Both methods also focus on trash mobs rather than on elites, because elites take extra time to kill. 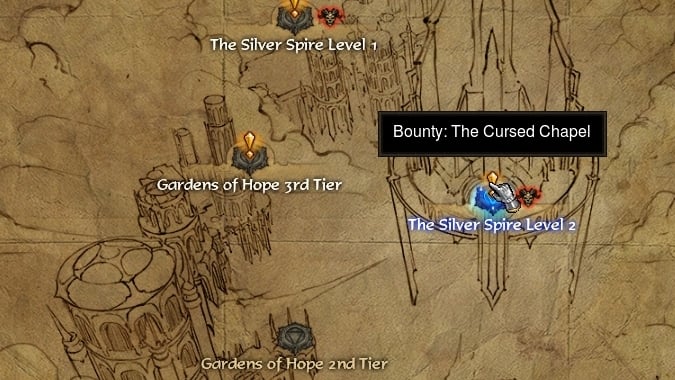 Cursed chests bounties: Speed leveling in Diablo 3 happens best through killing as many monsters as possible, as fast as possible. Cursed chest bounties, as you’ll recall from our guide to bounties, are always going to be of the type where you kill 100 or more things in about a minute, often while standing perfectly still. In other words, you’re guaranteed high mob density.

Popular streamers like to pick Act 1 chest bounties as well as a particular Act 4 chest bounty. The Act 4 bounty (Cursed Chapel) is often close to the waypoint for that bounty, while the skeleton monsters in Act 1, both as part of the chest event and on the way there, are very easy to kill. Because cursed shrines share “Cursed” named bounties with chests, here’s a list of bounties you want to look out for:

Act 1: Halls of Agony Level 3 (HoAL3): This level of Halls of Agony has high mob density, particularly because it has a lot of rooms or tiles that have multiple mob packs in predictable locations. Once you recognize the room tile — and you will learn most of the map’s tiles after only a few runs of this method — you can go around the tileset and pull most of the mobs together to AOE them down.

While you can explore the entire level to kill everything, most speed levelers will run in Level 3 until they meet a dead end. They’ll leave for another spot or restart their game because running back to the nearest non-dead-end path is wasted time.

Combination method: Unfortunately, cursed chest bounties can suffer from RNG if the bounty doesn’t spawn in a newly started game. However, Halls of Agony Level 3 is always there, and it has a chance to have a cursed chest bounty. Combining the two methods helps get more out of every game than each method alone as well as soften the downtime problem of cursed chests. 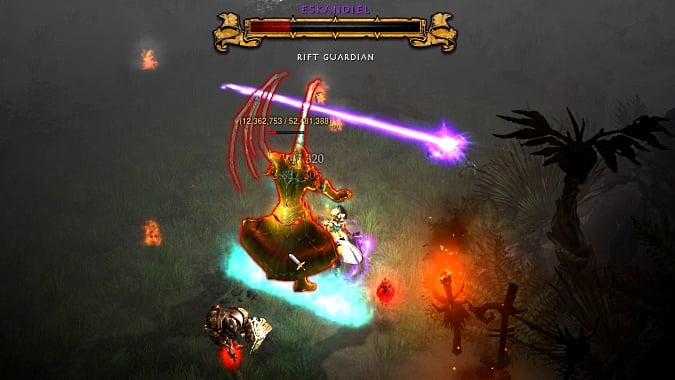 Speed leveling with the popular methods will get you to level 70 within a weekend of playtime, but that’s about as far as you’ll get. You don’t spend time training artisans, fully equipping followers, completing seasonal objectives or achievements, or even choosing a transmog complete with dye coordination. So if you want to experience the game as more than a blur up the leveling ladder, you’ll have to slow down. But that doesn’t mean you have to waste time — you can do activities that help gather materials or gear for later endgame reasons.

Rifts will drop crafting materials through killing the monsters inside, but rifts are known largely for dropping legendary gear pieces as well as those spiffy legendary gems. If you run rifts, you’ll end up a little more legendarily geared than if you just ground out Halls of Agony all day.

Rifts are similar to speed leveling, where you pull mobs along to the next pack. However, while speed leveling focuses on trash mobs, elites not only drop cool loot but are worth more of the progress bar in rifts. Rifts have random monster compositions for each map or floor you generate, but the elite glows stand out even from a distance when you’re standing in the darkly lit rift.

Bounties for Kanai: Bounties are also getting tweaked in patch 2.3.0, specifically providing materials for the prominent features of Kanai’s Cube. These legendary materials are not restricted to level 70 and you can start extracting powers as soon as you start getting legendaries, so you can start your cubic legendary library well before learning to farm Torment.

Bounties are the slowest solo method of leveling, aside from playing campaign all the way through and back again, but also the least boring and probably also the most all-around completionist method. Bounties include activities like zone events and seeing Keywardens roaming around, activities that help you complete both achievements and seasonal objectives.