The Queue: I am Death Knight, hear me roar 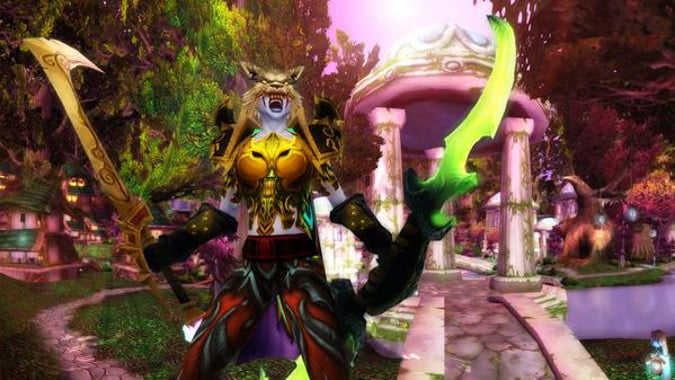 My friend Matt Fossen made this excellent header image for me, it’s of my DK from the leveling stream.

Yes, I’m a Night Elf now. Why? Well, partly because Alex complained a lot about not being able to see me in dungeons and that bothered me a bit. So now I’m a Nelf and I should be impossible to miss. But also, and here’s the weird thing about me — I get bored in extremely predictable ways.

You all know how I have like sixty Warrior alts? Well, that’s because I get bored by a specific race after a while. As much as I love Draenei, I’m currently bored senseless of the two I have, and I’m seriously jonesing to play a Tauren or Blood Elf again, to the point where I’ve rolled two new Warrior alts of those races. So since I didn’t want to try and level another DK, here we are, race changed so I can keep playing without getting incredibly bored.

Anyway, here’s the Queue. Let’s talk Blizzard games, shall we?

Death Knights are undead. What keeps their bodies from decomposing like the forsaken? Light-cauterizing still a thing for em?

According to Ask CDev, yes, Death Knights are still affected by the Light in the same painful way as other undead such as Forsaken. As for how Death Knights retain their physical integrity, it may be related to their addiction to causing pain, also mentioned in the Ask CDev threads on the forums.

Are blood elf death knights still afflicted by their racial addiction to magic?
No, though their new addiction, the one all Ebon Blade death knights possess, is arguably worse: the need to inflict pain. If death knights do not regularly inflict agony upon another creature, they begin to suffer wracking pains that could drive them into a mindless, blood-seeking hysteria—a far worse fate than that of those who suffer from arcane withdrawal

Death Knights are undead, but they’re not like Forsaken or Scourge who were raised by the Plague of Undeath, they were raised into their unholy half-lives by the direct application of the Lich King’s personal will and power. Not even those raised by the Val’kyr are so directly chosen, and the Lich King’s power was great enough that he could even raise Worgen as Death Knights and overwhelm the animalistic mind of the Worgen in the process. (Worgen are extremely resistant to undeath – neither a Val’kyr nor the Plague can raise one.)

This leaves the Death Knight with several advantages over your average Forsaken, and one terrible limitation – they must constantly inflict pain on others to retain their own existence. And of course this means Forsaken Death Knights truly do have the short end of the stick.

Q4tQ: What is the human (WoW) military’s stance on women in active combat posts? There are female guards and combatants in-game, but they, to me anyway, seem to be in the minority and somewhat of an oddity in high ranks.

I started thinking after just finishing Lord of the Clans, where it is mentioned in passing that women weren’t allowed on the front lines in the First War. Could of course have been ret-conned, but my little head-canon is that they weren’t allowed in the military during the First War, but regulations loosened during the chaos of the Second War. Then, after the plague and the continued hit on Alliance forces during the Third War, outdated regulations were thrown out the window due to a desperate need for hot bodies in combat. Which led to the first female war heroes, who are now getting promoted to high positions in the military after some 10-12 years in the service. And again, I’ve put WAY too much thought into something completely inconsequential.

Let me introduce you to Lady Mara Fordragon. If the Alliance (and Humans in general) ever had a problem with women in the front ranks, she probably helped cure it. Some credit should likely go to Alleria Windrunner as well, as she may have been the first woman most Alliance military of that time period (First/Second War) would have ever seen in battle.

It’s pretty clear that by the end of the Second War, women were starting to enter combat in Humanity’s military organizations. The Silver Hand, for example, definitely had women as Paladins at this time (as we’ll see below). I would argue it’s very likely that you don’t need to wait until the Third War — Jes-Tereth is a Grand Admiral, you don’t get that job easily.

Women are a minority in Stormwind’s military, but they’re far from anomalies, especially in her naval forces. There are two highly ranked Admirals, Jes-Tereth (Grand Admiral of the entire Alliance fleet) and Sky Admiral Catherine Rogers, commander of the Skyfire. Let’s also not forget Brigitte Abbendis, who rose to a high rank as a Paladin of the Silver Hand before the Third War and the rise of the Scarlet Crusade, which she rose to command as High General. As for their armies, Joanna Blueheart is the commander of the Marshtide Watch post in the Swamp of Sorrows.

All this being said, I wouldn’t read too much into a few lines in Lord of the Clans. We don’t even know what on the front lines means in that case. It’s unlikely, as just one example, that Dalaran mages would have been turned away no matter what their gender was.

Is anyone else not holding their breath for a Legion beta? Blizzard said WoD was further along than it really was and then delayed. I have a hard time believing anything they say these days given their track record.

Blizzard hasn’t to my knowledge actually said anything concrete about a Legion beta for you to be cynical about in the first place. That being said, I’ll be very surprised if it’s not at least playable at BlizzCon — it’s two months away at this point and they announced the expansion in August, so I have to think they’ll have it playable by then.

If I turn out to be wrong, it won’t be the first time.

Q4tQ: Since many classes are undergoing some degree of redesign (some more then others), what would you want to see included and/or excluded from the class/spec you play?

My current leveling DK is a Blood DK. I enjoy it quite a bit, but I feel a little like abilities like Bone Shield (which I don’t even have yet) don’t quite fit the ‘Blood’ theme. I keep imagining a change to Blood Boil for Blood DK’s that created a vortex of blood that acted like Bone Shield, but more visceral and frankly, disturbing. Typhoon of Blood? Blood Storm? Vortex of Blood? I don’t know what to call it, I just imagine my DK reaching out with her power and ripping the blood out of her enemies to shield herself.

Okay, that’s The Queue for Friday. I’ll talk to you all next Tuesday.