Heroes of the Storm Warrior Artanis ability and talents datamined 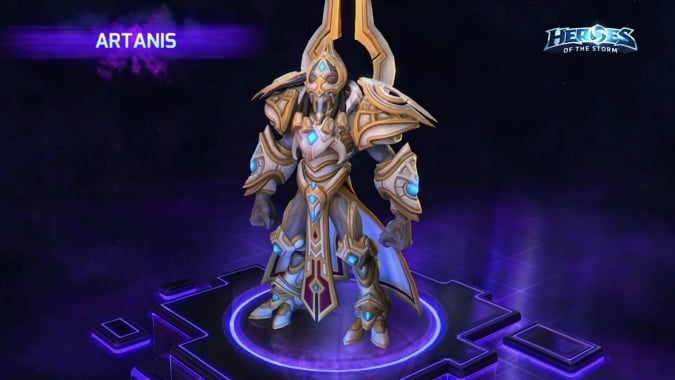 The latest patch to the Heroes of the Storm PTR has put the spotlight on the new Support medic Lt. Morales, but hidden in the files is also the next hero on the release schedule, the StarCraft Warrior Artanis. Though he isn’t yet playable on the PTR (and isn’t even mentioned in the patch notes!) his abilities and talents have been datamined to give us an idea of his playstyle. Though he is labeled as a Warrior he looks to be another hybrid-style class with his extensive Assassin-type damage. Let’s take a quick look at his kit.

D – Shield Overload
Cooldown: 20 seconds
If you take damage while below 50% Health, gain a 984 (186 + 42 per level) point Shield for 5 seconds. Your Basic Attacks lower the cooldown of Shield Overload by 4 seconds.

This will be a lifesaver, literally, in battle while your autoattack will be keeping this refreshed fast, but not so much if you’re fleeing and the cooldown remains at 20 seconds.

With tank-heavy compositions dominating the meta more and more, Artanis can use this ability to dash through them to the mages in the backline and then return to his own frontline while damaging everyone along the way. He can also use it to dash past gates and turrets and then return to safety. I think we’ll see many clever uses of this ability.

This burst damage ability can be amplified further by talents to add more strikes, do additional damage or even reduce incoming damage. How this is talented will depend heavily on if you are going for a tank build or a higher damage build. Either way, it will help you take down fleeing squishies and combined with this next ability that looks to be the big game-changer in his kit.

The ability to affect enemy positioning is huge. Imagine swapping positions with an opponent just in time to trap them in your teammates’ well-timed Void Prison or Entomb or Orbital Strike. Or to hit a fleeing mage with Phase Prism and now they are behind you instead of ahead of you. Blade Dash through them, activate Twin Blades, celebrate your kill. And it doesn’t end there. Facing two enemies at your gates with no back up from your team? Pull one of them behind the gate with this ability and into range of all four turrets while you attack the other or run back through your gates for the finishing blow. It can even be talented to grab two enemies at once. We will be seeing some epic plays with Phase Prism, mark my words.

R1 – Purifier Beam
80 Mana, Cooldown: 80 seconds
Target an enemy Hero with an orbital beam from the Spear of Adun, dealing 400 (96 + 16 per level) damage per second for 8 seconds. The beam will chase the target as they move. Unlimited range.

The beam travels at 75% the normal run speed of a hero, so unless a teammate has slowed or rooted your target, they will likely run out of the beam. That said, pairing with someone like Jaina whose every ability slows an enemy, and this could be the single target wombo combo that can’t be beat.

I predict this will be the Heroic Ability of choice between the two. Blinding a tightly-packed group of enemies (making them miss their auto attacks) for 4 entire seconds from anywhere on the map can buy your team the time to turn around a fight.

Once Artanis becomes available on the PTR (or just goes directly to the Live servers) we’ll have a better of idea of how his abilities interact with each other and which talents really make him shine. In the meantime, to get a better idea of how his attacks look, check out the video below.