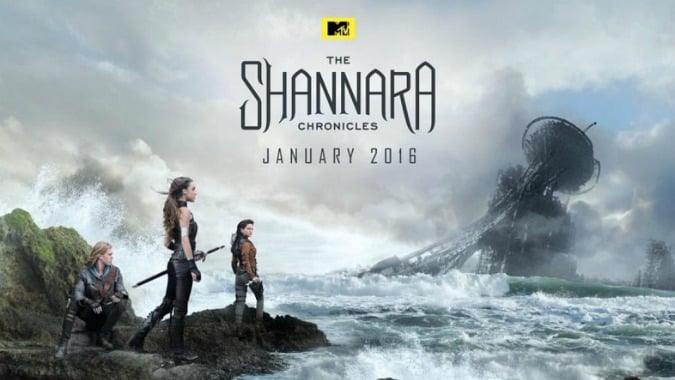 The new trailer makes the upcoming high fantasy series look like The Lord of the Rings mashed up with The Walking Dead and The Hunger Games. And I’m good with that.

MTV has been making a greater push into original dramatic series with high production values with Teen Wolf, Scream and Awkward. At New York Comic Con this last weekend, it rolled out the second trailer for its next big foray into high budget programming: The Shannara Chronicles. Based on Terry Brook’s bestselling book series, the new show looks, quite frankly, amazing. Overseen by Smallville showrunners Al Gough and Miles Millar, the show also boasts the cinematographer from Lost, Michael Bonvillain — and it shows with beautiful landscapes set in New Zealand and plenty of special effects.

The story is set on Earth, 1,000 years after a nuclear holocaust has reset humanity to a pre-industrial era and magic has returned to replace the loss of science. While in the books the reveal that the fantasy land of elves, dwarves and magic is actually the Pacific Northwest of the far future was hidden for quite a while, the new show is being upfront about that, as you can see in the trailer and poster art. The new series picks up not with the heavily-Tolkien-influenced first book, The Sword of Shannara, or the prequel series, The Word and the Void, but with the second published book, The Elfstones of Shannara which features an MTV-friendly cast of young teens.

Clearly MTV is capitalizing on the success of other high-profile fantasy properties, as can be seen in the trailer. Everything to do with the young protagonists has a Hunger Games vibe. I expected Rick Grimes from The Walking Dead to make a grizzled appearance during the scenes spotlighting the demons. And, of course, no high fantasy TV show or film can escape the influence of The Lord of the Rings or even Game of Thrones. None of this is a bad thing, although it remains to be seen if they can pull it all together into a coherent and well-told story. But based on this trailer, I’m happy to give it a chance.

The Shannara Chronicles premieres on MTV in January 2016 for a 10-episode season.

Blizzard Watch is made possible by people like you.
Please consider supporting our Patreon!
Filed Under: Mtv, New York Comic Con, Nycc, Terry Brooks, The Elfstones Of Shannara, The Shannara Chronicles
Advertisement