The Queue: My dream for player housing 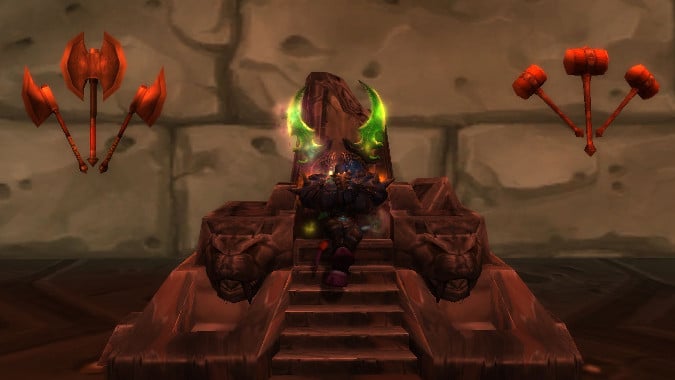 So a lot of folks talked about player housing yesterday. Okay, I’m willing to go with the flow.

The is The Queue. We talk about Blizzard games here. Let us begin.

In my humble opinion, have housing only if there is basically zero reason to hang out in there other than to just stare at the decor you’ve set up. No NPCs, command tables, AH, bank, quest hub, or anything like that. Also think it would have to be a room within a city, not out in the middle of nowhere like the garrisons. More like a room in an inn.

This is my dream for player housing, what I’ve always wanted and never expected the feature to be — I want player housing to be based in conquest.

Here’s what I mean. There are many places in Azeroth infested by monstrosities, evil cultists, hostile armies. We often get together with groups of people and deal destruction to these forgotten bastions of antiquity (I am never letting that phrase go) and then we leave.

But why do we leave? One of the most fun parts of some games I’ve played is claiming control over a place once I’ve killed the things that live there. Why not in WoW? My fondest wish is to claim Blackwing Lair as my personal fortress. The way I see it, once you’ve conquered a raid or dungeon, you should be able to set the portal in Stormwind (there would be a portal in SW/Org that led to your personal sanctum) to any of the places you’ve run and load that place as your base of operations. Your player housing is the place you liked best out of the places you’ve personally reaved your way through.

I admit it, I just want to sit in Nef’s chair. I love that chair. I sometimes go hang around in front of the Blackwing Descent portal just to sit in the chair. I’d love to have a way to get that chair and put it someplace so I could sit in it all the time. Or even better, let me get that chair and the one from Blackrock Depths.

Does a faster expansion-to-expansion turnaround mean much when we’re (potentially) stuck on the last raid tier for ~12 months?

Feels like an example of Blizzard trying to address concerns as expressed by players, but missing the actual issue that needs addressing.

I could be completely wrong, but here’s my thinking on the length of time we’ll be in Hellfire Citadel.

Patch 6.2 launched on June 22. That means that right now we’ve been in there less than four months, and BlizzCon will make it five. At that time, there will be a Legion beta announcement, and I expect we’ll be in the beta by January. Expect four months for that, and therefore I’m expecting a May Legion release. Sometime in late March we’ll get the big pre-Legion event, with the invasion starting in earnest.

So if we go from June to March in HFC, that’s nine months in HFC. That’s my current expectation, and again, I could be completely wrong on it. Keep in mind, some guilds progress slower than others, and I don’t think nine months is a particularly onerous amount of time for an end of expansion raid to last. (I’ll be honest here, I don’t mind a year as long as I know content is on the horizon.)

So, what zone/storyline breaks your heart? Have to admit that the Eastern/Western Plaguelands gets me a little with melancholy lurking in places like the Little Pamela quest.

I’ve been leveling through Darkshore/Ashenvale on my baby Nelf warrior and man, those zones. If you played a Night Elf in Vanilla, those zones destroy you. NPC’s you helped are dead. The place is smashed up hardcore. Malfurion gets suckered by Azshara. You push south and Maestra’s Post is overrun, Delgren’s dead, killed alongside Feero Ironhand defending the place from the unprovoked attack. The Horde is firebombing Astranaar from bats (including a house with a sick child unable to be moved) and Silverwind Refuge has been taken, the people slain (Horde players even walk on their corpses, left strewn about) and the native Furbolg enslaved by the Horde after making a pact with them. That’s right — the Horde allied with the Furbolg to take the Refuge and immediately turned on them.

By the time you get to the end of Ashenvale, you’ve managed to get the Furbolg to rise up and Raene Wolfrunner tells you that they should be able to reclaim Silverwind… but it never happens. You never see it. I talked about the disconnect I felt playing the zone today, how the Cataclysm stuff feels dated, but in terms of how it felt it’s just gut punch after gut punch as the Horde burns everything you held dear from Vanilla.

Stop bloody moving so I can smashface, you little so-and-so!!

Honestly, pretty much every D3 map does what I want it to do, provide me with things to kill and loot. But if I had to pick one as my least favorite, it’s the Caverns of Araneae. Hard to navigate and full of spiders. Not a fan.

It would depend entirely on what they allowed, but one of my favorite experiences back when I played with the Neverwinter Nights editor was to make dungeon crawls. Frankly, that’s probably what I would do — make up a reason to go in and smash and crush and loot. No fancy world saving, just a straight up dungeon delve. I’d probably make it be an old Titan vault protected by some native Azerothian monsters that found the place and moved in, not too dissimilar from Maraudon in concept but with more actual Titan stuff in there, and shorter. Because Maraudon’s crazy long.

And that’s the Queue for today. See you all Friday. Alex is up tomorrow, so ask him some questions about lore, he loves those.

Blizzard Watch is made possible by people like you.
Please consider supporting our Patreon!
Filed Under: Player Housing
Advertisement