The Queue: I found him 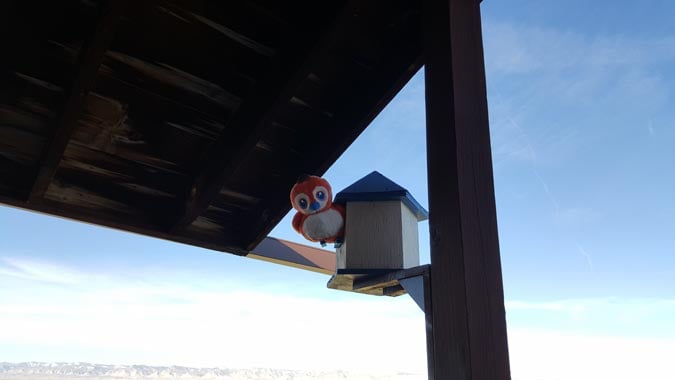 Look, I’m a sucker for cute things, and they don’t come much cuter than Pepe. He’s awfully cute, and cleverly put together — whoever designed the clips for his feet should get a cookie or something, because they manage to be ridiculously functional and still look like little birdy feet at the same time. I was going to be making the annual BlizzCon road trip solo this year, but it looks like Pepe is going to have to tag along. But enough about birds — let’s get to your questions!

Q for the Q: shipyards are the bane of my existence right now. I cannot seem to get any heirloom missions to pop. Anyone have any good advice/strategy?

If you focus on clearing out treasure missions, you should eventually see the ones you want pop up. Make sure you’re clearing out the upper right hand and lower left hand sections of the map — that seems to be where most of the rare missions pop up. I feel you though — after failing the elusive riverbeast mount mission, I’ve been patiently waiting for the silly thing to come back for weeks now!

Yesterday I finished the second grinding part of the Tarecgosa’s Staff legendary questline and helped Kalecgos being “(s)elected” as the new Blue Dragonflight aspect. It’s a very interesting exchange of talks between him and Arygos, son of Malygos, the other contender. I was just a bit concerned that the only other “named” Blue Dragon that was there was me as Tarecgosa.

Q4tQ: Is there any other important Blue Dragon around that should have been there? And… what happened to Arygos after that? I don’t remember killing him on any raid or dungeon, so I’m almost sure that, despite being coerced by Deathwing to end the world, he didn’t physically joined him after the eclipse.

The only other noteworthy blue dragon I can think of is Tyrygosa — she was once Kalecgos’ intended, but they broke off the relationship after he met Anveena. She was also the blue dragon responsible for restoring Malygos’ sanity…which also led to the Nexus War and his eventual  death, so maybe she wouldn’t have been exactly welcome at the ceremony.

As for Arygos, it’s…interesting really, because what you see in game is also an event that’s written about in Thrall: Twilight of the Aspects. In the book, he left after he wasn’t chosen to lead and sought out the Twilight Father. He wanted to help the Twilight Father kill Thrall, figuring that would shake Kalecgos enough that it’d change the minds of the blue dragons and they’d decide to let him lead instead. Unfortunately, choosing to ally with a dark and mysterious figure is a terrible idea — the Twilight Father killed Arygos, and used his blood to activate the Focusing Iris and siphon magic directly from the Nexus into a giant chromatic dragon.

Basically, the story in the book is very different from what you see in game — sort of an extended cut if you will — and Arygos is most definitely dead. I’d recommend reading Twilight of the Aspects anyway, it was a really good book, especially if you’ve ever read Lord of the Clans.

Q4Q: Are the murlocs native to Azeroth or are they Titan creations?  I don’t know much about murloc lore (other than Jinyu being evolved from murlocs), but they seem at least semi-intelligent and I assume they’re natives like Trolls and Moo-cows.  I’d love to know what lore we have about murlocs.

According to Brann Bronzebeard, murlocs evolved from the gorlocs you see up in Northrend. The gorlocs came from some unknown frog Ancient we don’t know about. If this is true, then the murlocs definitely weren’t Titan created, as the Ancients came from Azeroth, not from the Titans. But then this is all theorizing and speculation by Brann Bronzebeard, so it’s entirely possible he was full of hot air on that one.

Q4tQ: Why do you think we have not heard about other deities in the night elf pantheon besides Elune yet? Night elves are repeatedly stated in various sources to be polytheistic, but it seems that everyone just keeps talking about Elune and barely mention the fact that there are other gods and goddesses they worship.

And no, the demigods like Cenarius and Malorne are not considered actual deities by the kaldorei.

They have referred to Elune as the “primary” goddess, but we’ve never heard word about any other gods. It’s possible they referred to Elune as such just to leave an opening in case they wanted to introduce something else at some point. Or they could have put that in there because deities like Cenarius are considered demigods, and they wanted to make the distinction clear. Or we may see mention of other gods in Legion, considering we’re about to discover a long-forgotten ancient civilization of night elves.

If/when we turn back the Burning Legion’s invasion (again), what then? Do you think that most demons will just throw up their hands and say, “forget this nonsense. There’s a hell of a good universe next door; let’s go.” Will they shake their fists and shout, “curses! Foiled again!” Do you think a few entrepreneurial demons will just decide to cut their losses and ditch the Legion? I mean, at this point any demon with a shred of common sense would be questioning the competence of their superiors and admit the obsession with conquering Azeroth is seriously detaining the whole “galactic reconstruction” agenda, even if the Legion has great perks, like dental insurance.

Nope, they’ll just bide their time until they can strike again. If we do not wipe out the Burning Legion completely, it will always be a threat. The demons are bound to the Twisting Nether, they have endless patience and an endless eternity in which to carry out their plans. Azeroth is somehow important to the Burning Legion in a way we have yet to understand, and they aren’t going to rest until it’s wiped out, or corrupted, or whatever it is they want to do to it.

Q4tQ: Considering DemonHunters are going to be the new class when Legion comes out, do you think we will end up with a Necromancer class, along the mage/lock template, the same way that DHunters are FelRogues?

I sincerely doubt that one — while the ways of the Demon Hunter aren’t exactly smiled upon by the general public, Demon Hunters exist specifically to act against the Burning Legions. Their methods might be frowned upon, but their motives are something that people could theoretically get behind. Necromancy, on the other hand,  doesn’t really have any kind of altruistic purpose — there’s a reason it’s been largely shunned by society, and I can’t really see a situation where a Necromancer would “fit” as a class, from a story standpoint.

Mind you, that’s story standpoint. From a mechanics standpoint, I’m not sure how they could make necromancer that didn’t just feel like a caster version of a Death Knight.