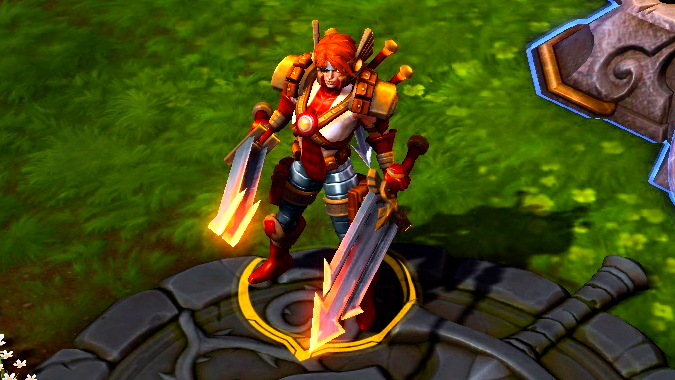 Super Sonya is one of my favorite skins in Heroes of the Storm. The skin is delightfully cheesy and has layers. Super Sonya’s gaudy design is a throwback to ’90s Liefeldian comic book abominations, complete with gratuitous pouches and a surplus of decorative (and useless) sword hilts. And of all of the characters in Heroes of the Storm, Sonya is the most likely to be a direct comic book reference to begin with — a nod to She of the Silver Bikini, Red Sonja. Super Sonya strikes me as a love letter to comics in general. And I’d like to see more skins like it.

Frankly, I wouldn’t mind superhero-themed skins for every character in Heroes of the Storm. If I had to be particular about it, though? A Zatanna-like skin for Jaina would be rad, and with Overwatch coming, I think I’d rather see a Widowmaker skin for Nova than actually see Widowmaker added to Heroes. Snipers is snipers. A fuzzy Zeratul? Heck, throw a cape and domino mask on anybody, and I’ll pay good money for it. Which Heroes character do you think should get superhero status?

Blizzard Watch is made possible by people like you.
Please consider supporting our Patreon!
Filed Under: Super Sonya, Superhero, Superheroes
Advertisement