BlizzCon 2015: Heroes of the Storm Arena changes up HoTS play

Well, a lot of people have been asking me do you think HoTS should have a mode like Tavern Brawl in Hearthstone, in the Queue, on Twitter, and now I can say they went one better because we’ve got Heroes of the Storm Arena, an entirely new game mode. 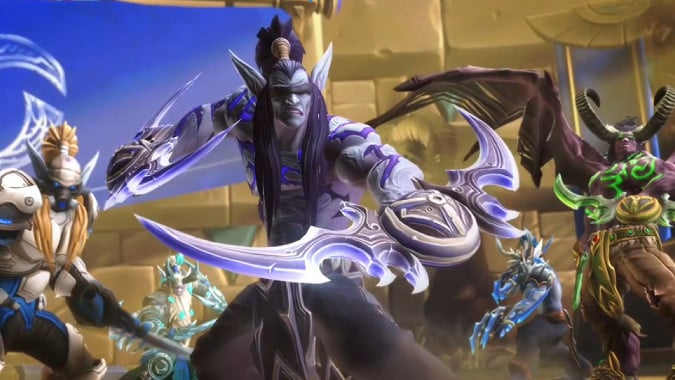 Now, it’s not the same as Tavern Brawl, but the spirit is similar — our own Megan O’Neill calls this an ARAM (all random, all mid) and it’s essentially that. You pick one out of three random heroes, not limited by the ones you already have. You get complete access to the entire Heroes roster, but instead of picking out talents you’re on the clock and you get to choose one Heroic.  You could easily end up with an entire party of the same hero, or wildly different combinations you’d never try out normally.

It shakes everything up and more is coming to it, for a taste, check out the preview below. I definitely think this is a great idea for players who want some variety from the standard Battlegrounds and objectives. Here’s hoping they expand on it.

Blizzard Watch is made possible by people like you.
Please consider supporting our Patreon!
Filed Under: ARAM, Heroes Of The Storm Arena, Tavern Brawl
Advertisement