This is the live blog for the Hearthstone panel at BlizzCon 2015. The live blog will take place at the following times:

The live blog begins after the break!

5:33 p.m. CST: Ben Brode is out on stage. We’re going to be talking (of course!) about the League of Explorers, which launches next week. There are 45 new cards that will release over four new wings.

5:35 p.m. CST: This adventure’s new in a lot of ways. Invented brand new characters and new locations. We wanted to take a break exploring dungeons and raids in World of Warcraft.

5:36 p.m. CST: Ben hops offstage and returns with a pith helmet on, launching into a description of Ironforge and the Hall of Explorers, which contains the greatest library in Azeroth. Something’s missing, though… the Staff of Origination. Elise Starseeker has been looking it down and has leads on the three pieces.

5:37 p.m. CST: Elise will need the help of the League to find the staff, but more than that… she’ll need your help. Will you help? Will you join the League of Explorers?

5:40 p.m. CST: The Temple of Orsis is where the first piece of the staff will be found. There’s a new board for the League of Explorers which gives the feel of exploring underground temples. In the temple, you’ll find a shiny lamp… who can resist a shiny lamp? New boss, genie Zinaer. If you beat him, you’ll earn the Jeweled Scarab, 3 mana with a battlecry to Discover any 3-mana cost card.

5:42 p.m. CST: Another card from Zinaer, Djinni of Zephers, 5 mana, whenever you cast a spell on a friendly minion it also casts a copy on him. Great with things like Power Word: Shield. Great card for buff decks. New warrior card, Obsidian Destroyer, 7 mana, at the end of your turn creates 1/1 scarab with Taunt.

5:43 p.m. CST: If you defeat Zinaer, you’ll get further in the temple and find a piece of the staff… but it’s currently being wielded by a temple guardian, Sun Raider. You’ll earn Anubisath Sentinel, 5 mana, Deathrattle gives a random friendly minion +3/+3. Summoning Stone, 5 mana, whenever you cast a spell summons a random minion of the same cost. Warlock card, Dark Peddler, Battlecry Discover a 1-cost card.

5:45 p.m. CST: After you have the first piece of the staff, the temple will start crumbling around you. You have to survive long enough to escape the temple before it collapses. There will be traps and decisions to make — you’ll have to choose wisely to survive. If you can make it, you’ll get these cards: Shaman card Rumbling Elemental, 4 mana, after you play a minion with Battlecry it will deal 2 damage to a random enemy.

5:47 p.m. CST: Paladin card Sacred Trial, Secret, when your opponent has 3 minions the next summoned gets destroyed. Ancient Shade, 4 mana, Battlecry shuffle an ancient curse into your deck that deals 7 damage to you when drawn. Reno Jackson, 6 mana, Battlecry if your deck contains no more than one copy of any card, fully heal your hero. You’ll get the hero who helped you as a card at the end of each wing.

5:49 p.m. CST: If you complete the first wing of the adventure, you can take the first piece of the staff back to the Hall of Explorers and put it on the wall. Then on to the next wing which lives in Ulduman. Here, you’ll work with Brann Bronzebeard to find the next piece.

5:50 p.m. CST: Ulduman’s always been infested with Troggs, but now Chieftain Scarvash has become more powerful and taken over. You have to navigate his auras to turn the battle in your favor and win these cards: Shaman card Tunnel Trogg, 1 mana, Whenever you overload gain +1 attack per locked mana crystal. Mage card Ethereal Conjurer, 5 mana, Battlecry Discover a spell. Druid card Mounted Raptor, 3 mana, Deathrattle summon a random 1-cost minion.

5:53 p.m. CST: When you defeat Scarvash, the rest of the Troggs will be angry… and you’ll have to hop in a mine cart to escape to the center of Ulduman. You’ll have to use the tricks Bann knows to escape — you won’t have your own deck but will have to master the mine cart. You’ll get a Tomb Spider, 4 mana, Battlecry Discover a beast. Rogue card, Unearthed Raptor, 3 mana, Battlecry choose a friendly minion gain a copy of its Deathrattle.

5:55 p.m. CST: If you make it to the center, you’ll meet an old friend: Archaedas. He’ll summon a lot of useless, zero attack statues. If you can make use of them to get to the vault, you’ll get these cards: Warrior card Fierce Monkey, 3 mana, Taunt. Warlock card Reliquary Seeker, 1 mana, Battlecry if you have 6 other minions gain +4/+4. Paladin card, Keeper of Uldaman, Battlecry set a minion’s attack and health to 3. Priest card Excavated Evil, 5 mana, deal 3 damage to all minions, shuffle this card into your opponent’s deck.

5:59 p.m. CST: Now you’ve completed the second wing and returned it to the League of Explorers… but now you’ve gotten a letter from Sir Finely Murrgleton to go to Stranglethorn Jungle. It’s in the ruined city of Stranglethorn, where Finely has been captured by Naga.

6:02 p.m. CST: After you defeat Slitherspear, you can find the next piece of the staff… but there are still some menancing creatures to defeat, like Giantfin, the massive Murloc. If you defeat him you’ll earn these cards: Murloc Tinyfin, zero mana 1/1 Murloc minion. (HOW CUTE!) Shaman card Everyfin is Awesome, 7 mana, give your minions +2/+2, costs 1 less for each murloc you control. Paladin card Anyfin Can Happen, 10 mana, summon 7 Murlocs that died this game. (We are sure that Matticus will hate this addition to the Paladin Murloc deck.)

6:05 p.m. CST: Now you’ll have to fight the Naga Lady Naz’jar to get the next piece of the staff. If you defeat her you’ll get these cards: Rogue card Pit Snake, 1 mana, 2/1 minion, destroy any minion damaged by this minion. Priest card Entomb, 6 mana, chose an enemy minion and shuffle it into your deck. Naga Sea Witch, 5 mana, 5/5 minion, your cards cost 5.  Druid card Jungle Moonkin, 4 mana, 4/4 Beast minion, both players have spell damage +2.

6:10 p.m. CST: Now you can assemble the staff — but there’s still one wing left. You may have seen a shadowy figure following the explorers, and this last wing will require you and the League of Explorers to band together to defeat this threat. This wing takes place in the Hall of Explorers itself. There’s a new Hall of Explorers board just for this wing.

6:15 p.m. CST: Eerie Statue, 4 mana, 7/7 minion, Can’t attack unless it’s the only minion in the battlefield. Rogue card Tomb Pillager, 4 mana, 5/4 minion, Deathrattle add a Coin to your hand. (Note that all of the Rogue cards here are minions… wanted to push Rogues in a new direction.) Hunter card Desert Camel, 3 mana, 3/4 minion, Battlecry put a 1-cost Minion from each deck into the battlefield.

6:17 p.m. CST: Mage card Animated Armor, 4 mana, 4/4 minion, your hero can only take 1 damage at a time. Just one more card! Arch-Thief Rafaam, 9 mana, 7/8 minion, Battlecry Discover a powerful Artifact. Every time you play Rafaam you’ll get the choice of the same 3 artifacts, each of which cost 10 mana. Mirror of Doom (fill your board with 3/3 Mummy Zombies), Timepiece of Horror (deal 10 damage randomly among your enemies), Lantern of Power (give a minion +10/+10). Ouch!

6:20 p.m. CST: There will be a new League of Explorers cardback which is for this month. Hit rank 20 this month to get it. There will also be a special card back for defeating the bosses on Heroic — giving you a reason to work your way through Heroic boss fights. Both are shown below. Wings will release each week except the week of Thanksgiving. 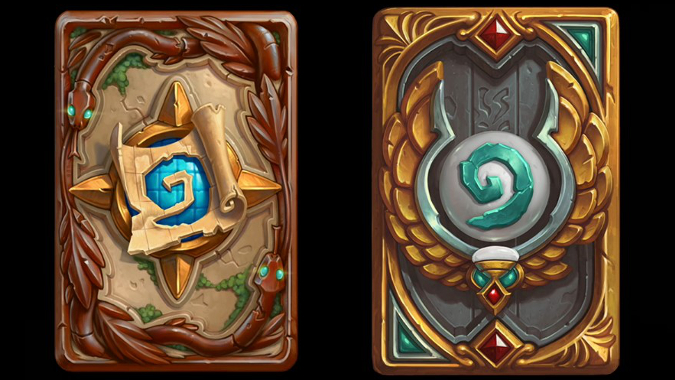 Blizzard Watch is made possible by people like you.
Please consider supporting our Patreon!
Filed Under: Blizzcon-2015, Live Blog
Advertisement