Heroes skins in development include Corrupter Cho’Gall and Ringmaster Greymane 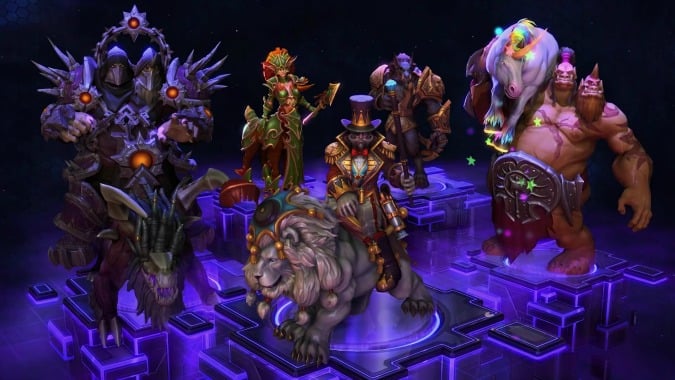 With Cho’Gall arriving on Tuesday in Heroes of the Storm and Greymane plus Lunara on deck, the devs have rolled out a preview of the skins for the three new champions. Bonus: new mounts as well.

The master skin of the two-headed ogre Cho’Gall’s gives him a classic WoW raid boss look while his Corrupter skin with the white tint gives him almost a Diablo-themed look. His mounts are shown off as well. Or rather how he carries the mount instead of the other way around. However, this only based on horse-based mounts. Other mounts he rides normally, but what fun is that?

Lunara works the nature look in both her base skin and her master skin. Like Cho’Gall, her master skin gives her more of a classic WoW look with the armor design. For her optional skin, the Sentinel look, gives her a Moonglade armor set. No mount options for Lunara since she is part-fawn.

Greymane rocks a Gilneas gentlemen look in both his human and worgen form. His master skin is more of a noblemen’s outfit as is his shapeshifted form. But his Ringmaster skin is an instant classic and his wereform is that of a lion. Put him on the Ringmaster’s Pride lion mount to complete the set. You just know this is going to be a bundle and I’ll probably be the first to buy.

The other new mount is the Felstalker that you can get by pre-ordering World of Warcraft: Legion. Check out the preview video below.