The Queue: Tuesday I’m in the Queue 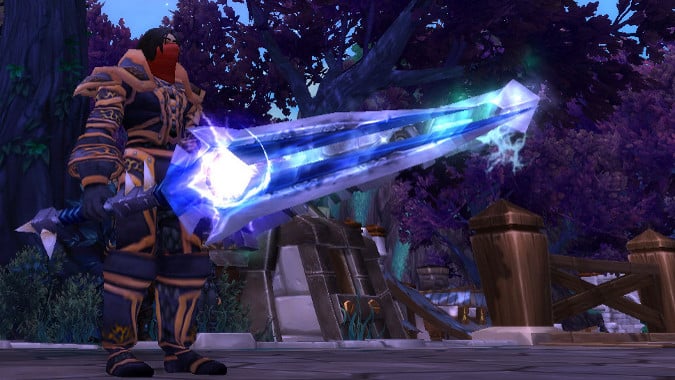 Anyone else a little disappointed that we didn’t get a 40 man raid version of original Deadmines for the anniversary?

It’s me, Matt. I’m doing this Queue. Let us begin.

Q4TQ: The Scourge razed Orgrimmar? Did that happen during the Scourge Event pre-WotLK, or is it something that wasn’t shown in game?

The Scourge attacked Orgrimmar during the pre-WoTLK event. I think raze is a bit strong, the city was still standing after that, but they did attack it.

I hope we kill Illidan again this expansion. We stop the invasion then everyone turns to Illidan sharpening weapons and we jump him. Dismembering his body and scattering it across Azeroth so it can never happen again. Can always put him back together if we ever need his help again but left to his own devices he becomes a mad dictator enslaving races and raising evil armies he doesn’t police at all.

At very least we can’t ever let Illidan lead anything again. You’ll go out for lunch and come back to Illidan has ripped out soul of those he was put in charge of to ensure enslavement of people and hired some fel orcs that start randomly murdering people but Illidan is busy working on a giant harem.

Honestly, I don’t think killing Illidan is a good idea. Frankly, he’s more dangerous to the forces of evil than he is to us. Look at his track record, you see him constantly attempting to gain more and more power and absolutely wrecking the side of evil, especially when he’s supposedly on their side.

He joins up with Azshara and Sargeras, and ends up handing victory to the Night Elves. He drains the Skull of Gul’dan and ends up killing Tichondrius. He nearly took out the Lich King until some do gooder (his brother) got in the way. Frankly, we’re better off just letting Illidan do whatever he’s doing. I certainly don’t see any reason to killidan.

I’m not proud of that pun.

Speculation time. At BlizzCon we were informed that the Beta servers would be up in a few weeks. I thought they even mentioned by the end of November. Given those facts, if true, when do you think they would come up? This week, we will get the patch with all a patch’s attendant bugs, so they will have to be worked out. Next week is Thanksgiving and I assumed there will less workers at Blizz for the holiday, so it may not drop for that reason. The Beta doesn’t have to open on Tuesday and sometimes hasn’t in the past.

What is your best guess for Beta opening?

My theory is it’s not coming out this year, because December is pretty hard to release a beta during. Considering we’re having Thanksgiving and Christmas within a month of each other, it seems like a bad time to put a beta out, but I’d like to be wrong.

Blizz, if you were to release the beta on December 7th, that’d be an awesome birthday present for me. I’m just saying.

If Blizzard gave us the option for Gnome hunters to stand on the backs of their pets and ride them … would you?

I would.  Cool visual.  “Large and In Charge … but not so large”

I’d prefer if Gnome Hunters get robot versions of the animals they tame.

What do you think about the idea of opening up the boost starter experience (teaching you how to play the class and slowly doling out your spells in a way that teaches you how to use them) to anyone once they hit said level? I’m dusting off some alts that I haven’t played for a few expansions and with all the changes thrown in, I feel like I have to “teach myself” the class all over again. I wouldn’t mind spending an hour or two having them walk me through it as if I’m new to the class.

I have to admit, some form of in game tutorial for people who’re coming back to the game or a class after a long period away would be something I’d support. I haven’t played my Hunter in a few months and frankly part of the reason why is that I have no idea how to play my Hunter anymore.

If I remember correctly, it’s around level 30 that Fury finally starts feeling right.  I think that’s when you have the relevant abilities so it feels like the fast-paced button mashing it should.  It’s been a while though.

I’ve been leveling various Fury Warriors and have three in the late 20’s, and so far, it definitely feels off. Based on the spellbook I’d say 30 to 40 is when it actually starts to feel like Fury.

That’s the Queue for today. I’ll see y’all Friday. This time for real.

Blizzard Watch is made possible by people like you.
Please consider supporting our Patreon!
Filed Under: Blessed Blade Of The Windseeker, Edwin Van Cleef, Thunderfury
Advertisement