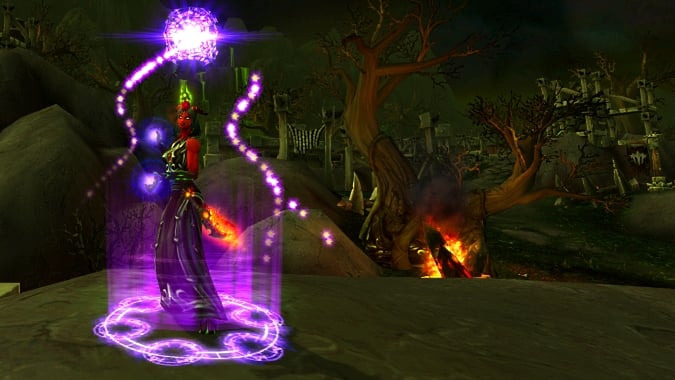 There’s a lot of Legion datamining happening right now, and while it’s information that can change in an instant, it still gives us an early look at what might be coming up for Warlocks. So far, we have info on professions, artifacts, and class hall followers as well as a lot of spell, talent, and glyph data. Just remember, it’s datamining, which means it can mean nothing at all or it can mean a thing that’s not quite the thing you think it means. Or, as is usually the case in datamining, it can just plain change — even now when we’re reading it, it could be old. This is, of course, going to involve spoilers, so stop reading now if you’re not into that sort of thing.

Also Gnome Hunters? Don’t tell me that Soulbinder Nyami is just a Shadow Priest who just happens to have a few demonic friends. Tyrant Velhari is so corrupted that she’s actually a demon. Two of our level 90 talents are the Eredar guys who became Man’ari instead of Draenei. Draenei Warlocks, c’mon! What do I gotta do?!

There aren’t many details on tailoring, so we have no clue about crafted cloth armor. I wonder if the armor modifications are parts, though I hope not. As much as I like the odd many-parts-handle-it system that Guild Wars 2 uses, for example, I’m not sure that fits in WoW. As a Warlock, I am naturally intrigued by Brimstone-Infused Green Dye, though I am intrigued by dyes in general because my bank and void storage are currently waiting to be emptied of transmog items.

Enchanting looks interesting, to say the least. I’m sure it will eventually be theorycrafted down to the best enchant combination, but for now it’s fun to look at all the options. As a pure DPS class, we tend to look into damage-only things, particularly in the numbers-focused PVE environment. It looks like your rings will be some secondary stat enchant, your cloak is an Intellect enchant, and then your neck enchant has different effects augmented by whatever you chose for your cloak and ring enchants.

Looking at the Intellect cloak enchant you have:

First off, holy bolts? Look, Sentinels, I know you’re here to help us, but we’re Warlocks. We can’t be having any of this holy-schmoly or flimsy-wimsy arcane stuff going on. Sentinels is still a numbers possibility, since the Versatility ring enchant in any of the three neck enchant combos talks about amplifying damage dealt. Of course, it’ll depend on how much damage, exactly, as to whether it makes the enchant important because of the proc instead of because of the stat, and that’s where I think this complicated system might go wrong if it’s not careful.

Another question worth asking is if you can have two effects going, since you have two rings and therefore two ring enchants. Are we limited to one stat augment on the neck? Can we have the Trickster neck with Versatility on one ring (amplified damage) and Mastery on the other (damaging curse attack)? Will diversity in ring enchants show up in activity differences (questing versus PVP versus raiding), or are we going to stick to the same set all expansion long?

Icon names aren’t necessarily going to tell you which ability or item they are for and you definitely can’t tell what anything armor-related does. Our artifact icons are in the datamine, though some have variations and some don’t. Demonology’s Skull of the Man’ari has just one icon, which looks like a demonic skull with possible shadow horns that are clipped by the top of the icon, but don’t worry, it exudes purple smoke; presumably fel power. Affliction’s Ulthalesh (the Deadwind Harvester) and Destruction’s Scepter of Sargeras both have a number of icons, potentially representing all options. Destruction’s icons in particular look quite fel and fiery for the spec, though I still think bright purple is a weird artifact color for a fire spec.

Strings are another highly volatile thing for datamining. They could be indicative of something, but I bet the strings like “PRESTIGE_LEVEL_4: Epic Squirrel” are probably just for testing purposes. (Hey, I’m not knocking Lady Amber’s abilities, but I feel that Constance the badger is more prestigous.)

The strings I’m most interested in seem to sum up our specs in ten words or less.

You know that most requested comeback feature of Affliction? Yeah, curses is the first word of the spec’s description and it comes up again in the basic class description. I know I shouldn’t bet on datamined things, least of all strings, but I’m just saying there better be some honest curses in our Affliction spellbook. Don’t even cheat around that phrase with something silly like renaming Agony back to Curse of Agony or Bane of Agony. Curse of Exhaustion! Curse of Tongues! Curse of Weakness? Curse of the Elements… not so much. It’s still not in the latest datamined spell info, but there could always be hope for the future.

Finally, there’s a bunch of scenarios listed, with some obviously named after class artifacts — though it’s not entirely clear which ones are ours. The Deadwind Harvester scenario is likely Affliction’s artifact quest. Demonology might take place in one Maw or another, though I don’t know where we’re going to meet up with the dreadlord Mephistroph and steal the skull from him (as I doubt he’s gifting it to us). The Scepter of Sargeras involves stealing things from Mages, so that might even take place in something like the Violet Hold. 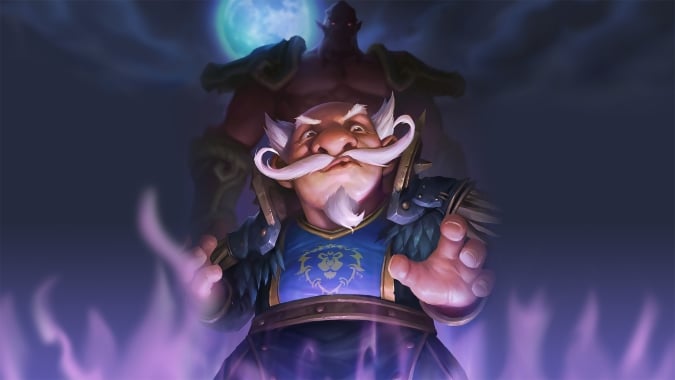 Where are class followers are concerned… well, on one hand, at least it’s not Wilfred Fizzlebang. On the other hand, Lulubelle Fizzlebang is about as close as you can get to Wilfred without actually being Wilfred. They gave us a Fizzlebang, just not the Fizzlebang.

As a member of the great Fizzlebang family of summoners, Lulubelle will be able to bring stronger demons to your cause. Just hope she doesn’t summon something too big.

I hope Lulubelle is at least a parallel in strength to Millificent Manastorm, the wife of Millhouse and a dungeon boss. I hope Lulubelle is a Warlock I will be proud to call my follower, not just an NPC whom I facepalm at for the length of the expansion.

The other follower we know about so far, Ritssyn Flamescowl, fulfills our hopes of seeing the Council of the Black Harvest again, though perhaps not quite in the manner we’d all like.

The last remaining member of the Council of the Black Harvest. With Risstyn’s help you can begin rebuilding the Council to its former glory.

Rebuilding the Council sounds promising, even if we’re going to let a Fizzlebang into the club. But “the last remaining member?” What happened to the Council? There’s no mention of Zelfrax or Shinfel, who were tasked with tracking down the Twilight’s Hammer cult. There’s no mention of Zinnin or Ritssyn, who were tasked with seeking out the secrets of Sulfuron Keep in the Firelands. We know that Kanrethad got Flavor of the Month hungry and rerolled to the newest not-best class — that’s his loss, not ours — but are you telling me we don’t get to see or hear from Jubeka again? Even if she’s stuck in Outland keeping Kanrethad eternally nerfed, we’re not going to use her as a reference in a quest somewhere? Jubeka is a Warlock hero I’d root for instead of Gul’dan. Ritssyn has a long history in WoW, especially in item references, but Jubeka is the one we got to know in the green fire questline. Why would Ritssyn seek us out? He has no knowledge of what we’ve done as Warlocks other than through hearsay about what we’ve done on Draenor since.

But that’s datamining, for you; it gives us only glimpses into what’s there — and we may yet see more of the Council of the Black Harvest when Legion (or the Legion beta) finally arrives.