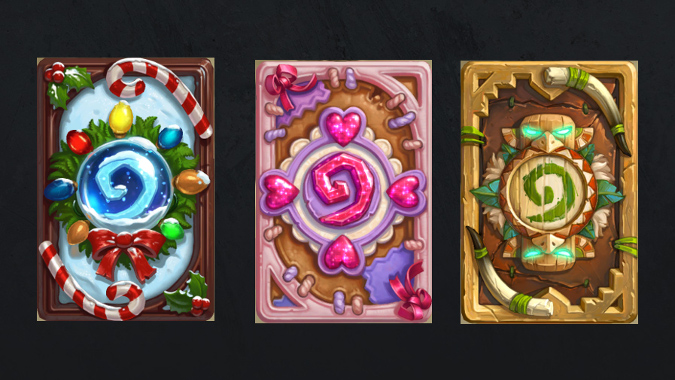 A new patch is being pushed out to Hearthstone clients and it includes new card backs and many new Brawls including a Winter Veil-themed one. Patch notes and info after the jump.

The new card backs are themed Love is in the Air for January 2016 Ranked Play and Tauren Thunderbluff for February 2016 Ranked Play. There is also a Winter Veil Wreath card back for participating in the Winter Veil Brawl . In that Brawl, crates will drop onto a special Winter Veil board and smashing your opponent’s crate will grant you a gift, though it’s unclear what that gift will be.

There are three other new Brawls in this patch as well. Battle of the Builds asks you to build a deck around a single theme like Battlecry or Murlocs. Deal Your Fate uses the new Discover mechanic, but the cards you choose are from the all new set called Fate cards. Blingtron’s Beauteous Brawl has the overly generous robot changing your hero power to Equip A Random Weapon and gives you weapons as well.

Prepare for some holly jolly Hearthstone! In this patch we’re adding League of Explorers game boards to all modes, introducing several new card backs, and fixing a few bugs.

Read on for details!