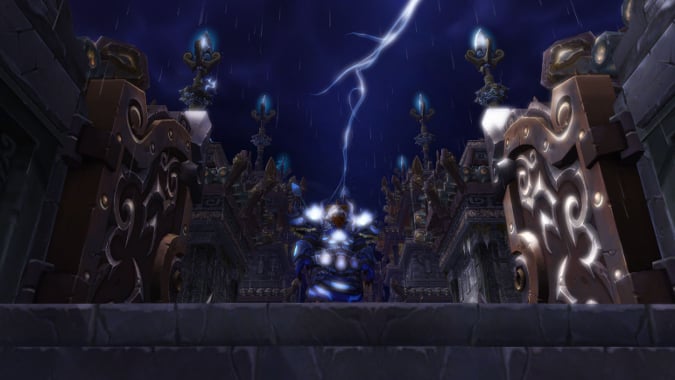 The Legion alpha is starting to pick up steam as it moves along, with more information is trickling out as testing progresses. We’re learning much more about the development of the game through such early access, but we’re also getting a head start on important information. With the alpha offering an advanced preview of key systems we’ll see in the next expansion.

Possibly the most important of these systems, and the one I am very interested in, is the Artifact Weapon system. These will be a central part of our character development, not only letting us customize the look of the weapon but also letting us customize our abilities as we level the weapon. Today we’re going to talk more about the Elemental Shaman Artifact, The Fist of Ra’Den.

Last time we sat down, I shared my first impressions of the Elemental Shaman and Restoration Shaman Artifacts. However, that was written before the latest alpha data about the abilities and was more of a reaction to the proposed lore and the initial reveal. Now we’ve started to get a glimpse into Artifact traits, letting us see just what our Artifacts will offer us.

But before we dig into what we know, remember: while we are discussing these abilities and powerups, this is alpha information and is subject to change at any time prior to release. This is an early preview rather than a finished product 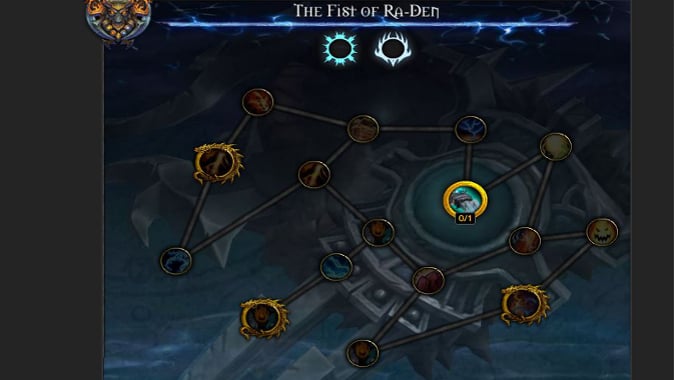 Key upgrades for your Fist of Ra’Den

First I think it would be pertinent to talk about the major upgrades amongst the Artifact traits — the gold abilities, or key abilities. These are the major milestones that unlock larger benefits, power-ups, or sometimes even new spells.

First on the list is Stormkeeper, the first ability you will unlock after receiving your Artifact Weapon.

“Raise the Fist of Ra-Den to the sky and absorb all nearby electric energy, causing your next 3 Lightning Bolts or Chain Lightnings to have 100% increased chance to critical strike and 200% increased damage.”

That is a pretty sizable buff. 100% crit chance and 200% increased damage is nothing to scoff at. The ability has a one minute cooldown, and as of now it appears to have a 15-second buff duration. The fact that it’s only a one minute cooldown is pretty good: you’ll be able to use it multiple times on a dungeon or raid encounter and it will make leveling and questing just a little bit easier. All around, I think this is a good first step.

Numbers-wise I’m not sure how this will work out as far as effectiveness, but I appreciate the thought on this one. Mainly, it incentivizes swapping between spell types. Yes, it can complicate spell priority, but I think that will level itself out once we get used to it. The extra damage is great, and the incentive to spell weave is something I welcome with open arms.

Volcanic Inferno I’m not sure about. This is a passive ability that allows for Lava Burst to occasionally open up a volcanic fissure under the target, dealing 60% of our spell damage to everything within two yards of the fissure for six seconds. On one hand, this is essentially free damage. You don’t have to activate anything: it just happens. This could be great for AOE packs or bosses with tons of adds. On the other hand, proc rate will make or break the usefulness of this.

Fury of the Stormlord

Fury of the Stormlord is the last in the upgrade path, and probably one of the more interesting ones on this list. When you summon your Lightning Elemental, you also summon an image of Ra-Den who will begin blasting everything you have marked with Flame Shock with the power of lightning. We have no clue how much damage he will do or how long he will remain summoned, but I suspect he’ll stick around as long as the Lightning Elemental will.

This is a cool flavor ability — I mean we are using his weapon and we actually get to summon him to fight alongside us! The lore nerd in me is extremely happy with this, and I hope it has a suitably awesome visual to go along with it. All in all, the major Artifact Weapon abilities all seem reasonably awesome, and I can’t wait to get my hands  on them to start blowing stuff up!

The good, the bad, the…not quite major

Along with the major abilities there are a plethora of minor ability and buff unlocks along your Artifact upgrade paths. Currently there are 12, and they range from utility power ups to damage increases to survivability powers. Here are a few notable upgrades that caught my eye:

Overall I’m happy with what I’m seeing so far. If I had one complaint it would just be wanting to see maybe a little more variety, though the combination of single target damage buffs, AOE damage buffs, and survival abilities is nice and means that you can customize the weapon based on what you are going to be doing in game. Honestly, I just can’t wait to get my hands on it and start summoning my very own Stormlord to light up the fight. What do you think about the artifact abilities for the Fist of Ra-Den so far?