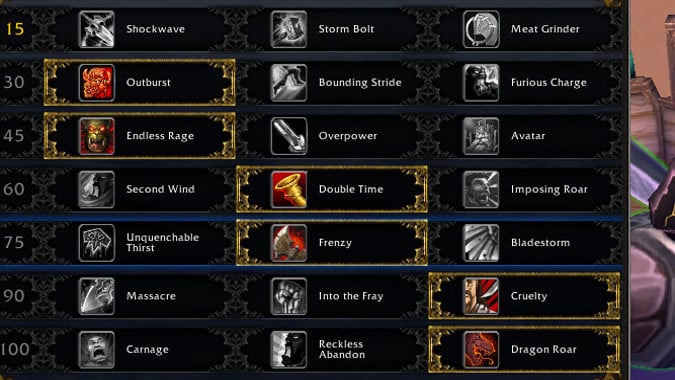 The Legion Alpha just dropped a new build and there have been changes to the talent trees. Protection remains largely unchanged with no major alterations, no new talents, but Fury sees several new talents. Let’s see what’s different this time around.

Well, for starters, Sweeping Strikes has been replaced by the far superior Meat Grinder. Instead of making your Raging Blow passively hit an additional target, your Rampage ability will now hit up to four additional targets after a Whirlwind for up to 8 seconds. That’s a much more active ability and certainly seems better in terms of targets it’ll hit, plus it requires you to use Whirlwind proactively.

Outburst replaces Seething Rage and is far inferior. It basically means that now using Berserker Rage now Enrages you for 5 seconds and reduces the cooldown to 30 seconds, which is fine, but compared to the self-healing that Seething Rage granted it’s far and away an inferior choice.

Unquenchable Thirst moves down to the level 75 tier, replacing Enraging Blows, which makes sense. They were fairly similar abilities, after all. Level 90 sees some real changes. First up, Heroic Strike is gone. It’s replaced with Massacre, which basically causes your Execute critical strikes to make Rampage cost now rage, which allows you to use both more during Execute phases. Then there’s Cruelty, which modifies the new Furious Slash offhand attack, so that it always does damage as though you were Enraged. 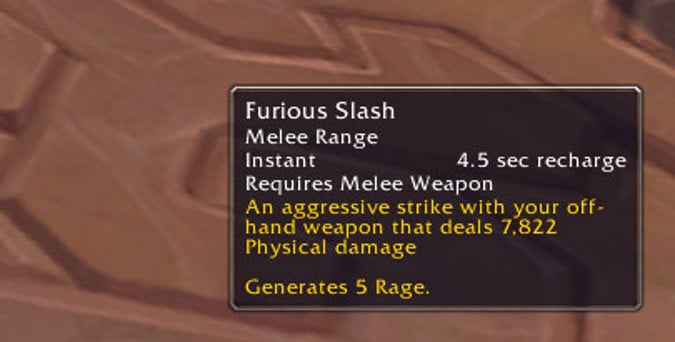 Right now, the takeaway for me is that Fury got a survivability nerf and I’m not sure how this will all shake out in terms of damage. Rage is going to be a little harder to get, but Enraging Blows wasn’t a terribly exciting ability, it’s good to see it baked into Raging Blow. On the other hand, Cruelty is also not a terribly exciting ability. We basically got Wild Strike as a rage generator instead of a rage dump, maybe that’ll smooth things out. All in all, tweaks to the spec, and I admit I’m not surprised to see Heroic Strike gone from Fury. If we look here we see a lot of attacks were changed as well, it’s a lot to process, we’ll see how it all plays out.