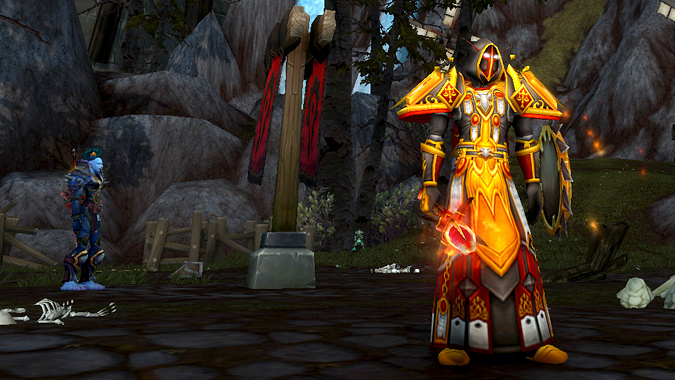 Legion PVP is going to be a very different game than we’re used to!

As Blizzard announced in their PVP preview last week, Honor and Conquest will no longer be currencies — instead, Honor Points will work like PVP Experience Points, unlocking new talents and other rewards, such as gold and Artifact Power. Players who reach the Honor Level cap will also be able to Prestige, resetting their Honor Level in exchange for artifact appearances, mounts, a wearable faction pennant, and other cosmetic prizes.

Gear will also be much less important, as there will be no PVP gear to purchase, and PVE gear will be more or less normalized when entering PVP play. Blizzard already took steps in Warlords of Draenor to make it easier for new players to jump into PVP, but they’re really going all-out in Legion — the emphasis is clearly focused on player skill rather than having a full set of PVP equipment. A drastic change, and one that I’m sure some players won’t be happy about, but it is what it is!

Each class specialization is also receiving their own unique set of PVP talents in Legion, and that’s what we’re here to talk about today. Let’s take a look! 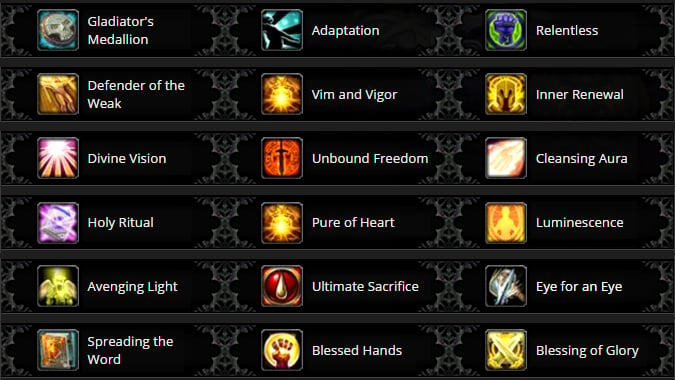 Our anti-crowd control tier gives us one active PVP trinket ability in Gladiator’s Medallion (Human players will recognize this as essentially Every Man For Himself), and two passive, automatic crowd control removal options. Personally, I’m going to steer clear from Adaptation and its automatic activation. I’m not keen on giving up control of my PVP trinket, and quite often as healers we’re better off just waiting out a stun or incapacitate if no one is in immediate risk of dying, saving our trinket for when we actually need it. And I’d hate to waste Adaptation’s effect/cooldown on a Sap!

Relentless seems like a nice bonus, but once again we’d have to give up Gladiator’s Medallion and its ability to break crowd control on demand. In my opinion, it’s too much of a sacrifice. That being said, I’ll probably run with Relentless in some battlegrounds, where it’s less likely that you’ll get heavily focused and instead only be subjected to random, occasional crowd control effects.

I love Defender of the Weak — when players are low on health and urgently need healing, here’s a beefy haste bonus right when you need it! On the other hand, Vim and Vigor takes a step in the opposite direction, buffing your healing when you are near full health. Sadly, anyone who’s healed in PVP before knows very well that healers tend to be heavily focused by enemy players, so I doubt that we’ll be able to stay above that 80% health threshold for very long, healing buff or not.

Inner Renewal seems an odd choice to round out this tier, as mana regeneration feels out of place compared to throughput buffs. In any case, I almost never find myself low on mana in PVP, but if you are finding mana to be a concern this talent might be just what you’re looking for. 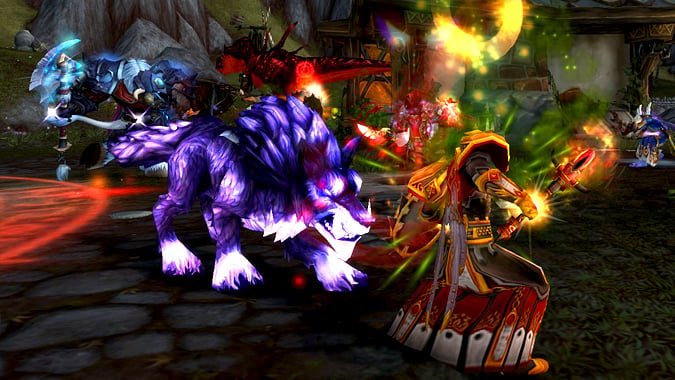 When the Legion Holy Paladin changes were first announced, there was much uncertainty and worry from PVP players about our new Mastery, which seemed to indicate that we would be forced to heal in melee range during PVP. After all, being stuck next to a bladestorming Warrior or being susceptible to melee cleaves and short-range stuns is a sure way to ensure you’re gonna have a bad time. Many players also expressed concerns that this disadvantage might make players choose other healing classes over us, since the other healers would be free to stay at range and remain safely out of harm’s way.

The revealing of Beacon of the Lightbringer alleviated some of these worries, since it will allow our mastery to function from afar. Of course, that still leaves our auras at a tiny 10-yard range, but it looks like we can fix this with Divine Vision, which bumps our auras up to a nice 40 yard range — more than enough to cover our teammates in most battlegrounds and arenas.

Unbound Freedom’s bonus speed boost to Blessing of Freedom is a handy utility benefit — not only will it allow a slowed/rooted player to catch up to their target, but it will be doubly helpful when used to free a snared flag carrier, freeing them and giving them a little sprint to get that flag safely home. In fact, since you can Blessing of Freedom players even if they aren’t snared, you can also think of it as a 6-second sprint buff on a short 25 second cooldown (which could be reduced even further with our artifact trait, Blessings of the Silver Hand).

Cleansing Aura suffers from a small effect range and only removing the same effect from nearby allies. If it was a full Cleanse I could see where it might be useful, but I don’t think I’ll ever take it over the other options this tier. 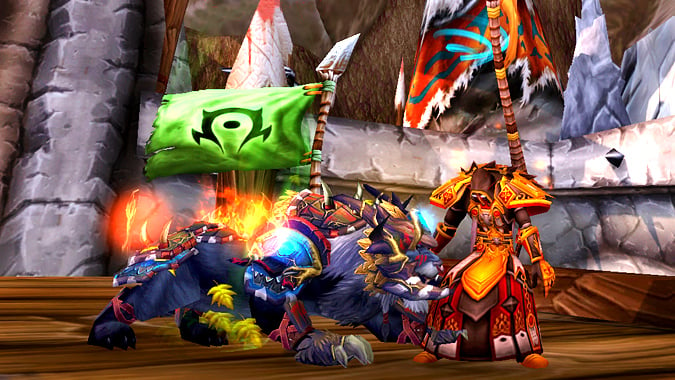 Two free heals being attached to our Blessings via Holy Ritual isn’t awful, but the heal itself (150% of Spell Power) is rather lackluster. In comparison, Holy Light heals for 375% of Spell power, while Light of Dawn heals 5 targets for 125% of Spell power. That being said, it’s still free healing. If we needed to, we could also double dip on these free heals with consecutive Blessing spells, assuming Blessings work identically to the current Hand spells — since players can only have one Blessing at a time, casting a Blessing on someone and immediately following it up with a different Blessing would end the first effect, triggering Holy Ritual’s free heals in rapid succession.

Pure of Heart is…another sort of chain dispel talent? Keep in mind that it does only work against Diseases and Poisons, so it won’t be useful against everyone. Luminescence has that familiar 10-yard limitation again, but the effect seems nice, sort of a reverse Beacon of Light functionality. If you’re getting focused and desperately concentrating on keeping yourself alive, Luminescence will splash heals onto your allies who are (hopefully!) nearby trying to save you. 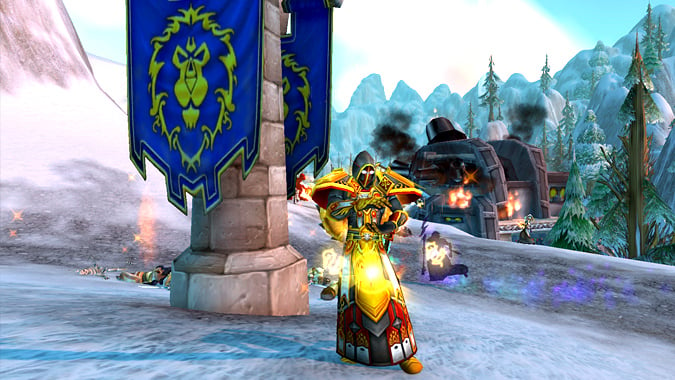 Avenging Light turns us into Atonement Paladins! (Sort of.) Historically, I don’t cast Holy Light much in PVP, but if it also dealt damage maybe I might try it? I’m excited simply to have another damage-dealing spell, honestly. Eye for an Eye is a passive source of outgoing damage, but at a meager 1% reflected, it hardly seems worth mentioning, let alone taking. (Then again, if the other talents in this tier don’t appeal to you at all, 1% reflected damage is better than nothing.)

Ultimate Sacrifice really cranks up the dial on our self-sacrificing theme, altering Blessing of Sacrifice to instead transfer 100% of all damage the target takes to us, in the form of a damage-over-time effect. This means that for a short time, you can make someone completely immune to all damage. It’s not unlimited, of course — the effect still ends when the transferred damage would cause you to fall below 20% health, and the damage-over-time effect might end up killing you if you’re not careful. Definitely an intriguing option, though, and potentially invaluable when trying to protect a critical target like a player holding an orb in Temple of Kotmogu, or a teammate only a few yards away from capturing an enemy flag.

Spreading the Word is ridiculously powerful, especially when paired with Divine Vision (60% reduced incoming damage for 10 seconds to all allies within 40 yards??), but Blessed Hands is our old trusted friend Clemency with a fancy new name. Blessing of Glory is no slouch either — relatively short cooldown, instant-cast healing buff with a free heal to boot? Pretty nice. I’ll probably stick with Blessed Hands in Arenas, maybe trying out Blessing of Glory when facing non-physical DPS opponents, and run with Spreading the Word in larger battlegrounds. All three of these talents seem fun and strong, however — can’t really go wrong! 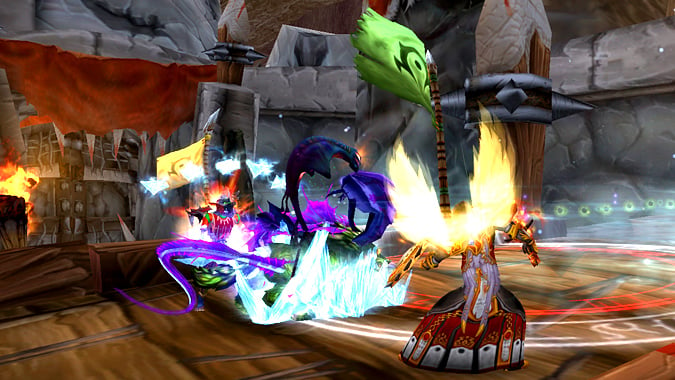 Holy Paladins are getting a fun mix of healing buffs, utility bonus effects, and even a few methods of dealing damage in our Legion PVP talents. I’d have liked a few more damage-dealing abilities, but I suppose when you mix in some of our PVP damage talents we actually have a handful of options. I’m definitely looking forward to experimenting with different combinations of PVE talents, PVP talents, and Artifact traits, and finding some builds that work well for me!