Breakfast Topic: Missing out, and the return of the Snowy Owl 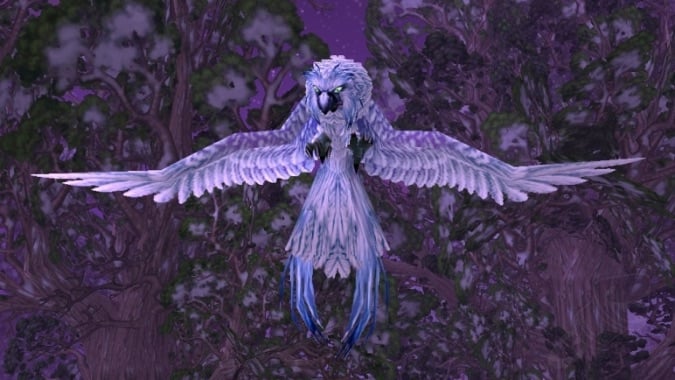 This week the winter-only Snowy Owl has returned to World of Warcraft. Catching this battle pet is a requirement of the Kalimdor Safari achievement and, thus, the World Safari achievement — if you really do manage to catch ’em all, you’ll wind up with the Zookeeper title.

Becoming a zookeeper in WoW is a fairly sizable task, and with two seasonal pets — the Snowy Owl and the summer-only Qiraji Guardling — it’s easy to miss out and have to wait another year to snag this achievement.

Admittedly, the snag on picking up Zookeeper myself wasn’t the Snowy Owl, but the rare spawn Minfernal. But for those hunting achievements while waiting out Legion, these seasonal pets can be a real snag. If you’re starting your pet-catching now, you’ll still have to wait until June to grab your Guardling to finish the achievement — by which point your attention span may well have waned and you’ve moved on to other things.

Another seriously time-consuming achievement is What a Long, Strange Trip It’s Been, which requires you to complete all of the holiday meta-achievements — some of which aren’t easy. From start to finish, this will take you nearly a year to knock off your to-do list, and that’s if you manage to finish every achievement in the meta during the holiday.

So, readers, what are the things you miss out on in-game because they just take too long? Because your attention span wanes well before you reach your goal? And what have you missed out on because you weren’t paying attention, because you missed a deadline, you were off for a weekend?

Blizzard Watch is made possible by people like you.
Please consider supporting our Patreon!
Filed Under: Achievements, Snowy Owl, What A Long Strange Trip It’s Been, Zookeeper
Advertisement