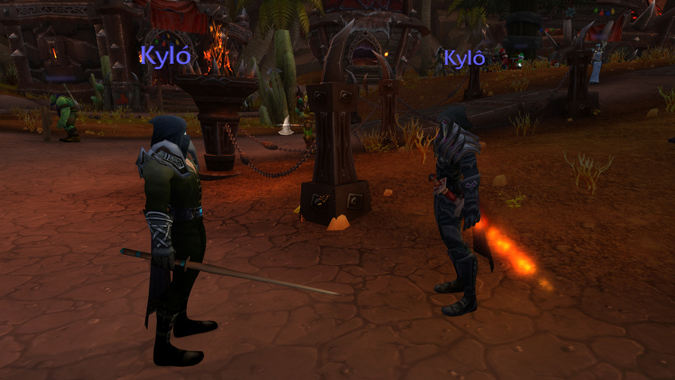 I suppose, given the immense popularity of Star Wars: The Force Awakens, that it was only a matter of time before people started rigging together transmogs inspired by characters from the film. But I definitely didn’t expect to see two Kylo Rens in one spot. Awkward? Awkward. Just after taking this screenshot, the one on the right flipped a table, though I’m not sure whether it was out of frustration with Kylo Two, or he was just channeling his dark side.

So I heard Random House is working with Blizzard on a bunch of Novel projects on their franchises, any idea what those novels might be about?

Just one so far — Illidan, by William King. It’s due out in April, and you can already pre-order it over on Amazon! There are some other books coming out this year as well. World of Warcraft Chronicle Volume 1 is due out in March according to Amazon, and Christie Golden wrote the prequel novel for the movie Warcraft — that one is due out in May.

QFTQ: do you think tier should be available IN LFR again? I mean that tier is tier, no more of this LFR tier is different with different ser bonuses crap. Personally I think that removing tier from LFR was a huge mistake.

Personally, yeah. I’d like to see tier sets back in LFR again. Or if not actual tier, I’d like to see the sets better designed, model-wise. It doesn’t have to be tier-level models, but some of the sets from LFR were downright bland in appearance.

What minor feature added in Warlords of Draenor do you like the most? After thinking about this, my answer is the new lighting system (ambient occlusion?) — that does a lot to make WoW look more modern and pretty. I’m wave the “gameplay before graphics” banner, but if the gameplay is fine then upping the graphics without effecting the performance (ie, as an option) is nice.

I actually like how the grass moves when you run through it now. It was a subtle change, but it made the environment pop, and kind of grounded the player character in the world a little more. They actually affect the environment around them now, and that’s pretty cool.

QftQ: I’m sorry to ask this, but… Are the old WoW Insider show episodes still available from iTunes and so forth? I never listened to the last few ones.

They are unfortunately no longer available, vanished into the wind and ether and uh…circuits of the internet. Well, as far as iTunes is concerned anyway. I think you can still find some of the old shows over on Stitcher though, if you go looking!

Q4tQ. What does the average Horde member think about Garona? I’d imagine that she is infamous to Alliance commoners for the assassination of Llane Wrynn, but would a Horde commoner even know who she is beyond a half-breed reminder of their Draenei bashing days.

It’s kind of hard to consider that, because we haven’t got a ton of solid information on Garona. She’s half-Draenei, but she doesn’t necessarily appear to be — you can tell she’s not a full orc, and for years she was said to be half Human. But the main reason it’s hard to consider that is that most of the Horde has little to no experience with Garona. Her time was during the First War, and that was before the current Horde existed. After the First War, she pretty much disappeared, and it’s likely that most of the new Horde had no idea who the heck she was.

That said, I don’t think anyone really has any undue negative opinion of Garona, Horde-side. When we first encountered her, she was helping us out against Cho’gall in Cataclysm. When we saw her again on Draenor, she was obviously working for Gul’dan, but we discovered he was controlling her magically, and once we broke that, she was fine with working for us. So…I don’t think anyone really hates Garona, Horde side. She doesn’t have the same reputation that she has for the Alliance.

Q4tQ: Do you think some version of ‘The Player Character’ should be involved (or more involved, depending on story) in expanded universe books/comics etc? Like if ‘The Player Character’ being witnesses in Warcrimes, perhaps from the Stonetalon incident showing Garrosh’s ‘accidental complexity’ and maybe giving the reader a genuine (if futile) possibility of redemption, for example

There was actually a little example of that in Tides of War. Jaina sends a group of five people off to do something, and it’s a reference to the Theramore scenario. It was kept very vague, with no mention of races or genders or classes specifically so that it could be anyone — it could be you and your friends as you do the scenario. It was very subtle, but it was also pretty cool. I don’t think I see them ever going further than something like that, that intentional kind of vague side-reference, because if you start to make it more detailed or more specific, it’s not going to be as easy for players to say “Oh hey, that’s me!” when they read that particular section.

I don’t think they’ve deliberately done that since then, but there are parts of War Crimes, like the big battle at the end, that kind of give a broad overview of people fighting, and players could consider themselves part of that giant scene. But I don’t think we’ll ever see “The Player Character” as some kind of major figure in a book. Maybe you’ll see reference to “the Commander” in Draenor at some point, which is obviously us, but I don’t think it’d go beyond a reference.