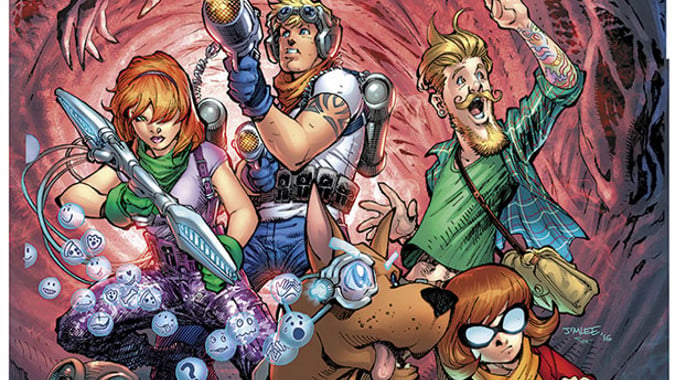 Sometimes it seems like the point got missed with a property.

That’s especially the case with these reboot Hanna Barbera comics that DC Entertainment (formerly DC Comics, which admittedly doesn’t make a lot of sense because the DC in DC Comics stood for Detective Comics, so they were Detective Comics Comics — this bit of comics trivia brought to you by me wasting my life knowing that) will be putting out.

Some of them don’t sound horrible — Jonny Quest and Space Ghost teaming up seems like a doable premise, for instance. I’m a huge Alex Toth fan, so I have high hopes for that. But seeing a comic named Scooby Apocalypse, and having the sneaking suspicion that they’re abandoning the core message of the original Scooby Doo cartoons — you’ll note that it was always some con-man preying on people’s gullibility back then — in exchange for yet another monster hunter series, means that anyone who discovers the character via these comics isn’t really discovering the character.

Look, I love Fallout and I love The X-Files, but we don’t need a mash-up of the two of them with a talking dog as the headliner. The idea of a team up between the Herculoids, Space Ghost and Jonny Quest? Especially if Hadji gets some bloody characterization? Yeah, I’m down for that. But the Scooby gang wandering a ghost and monster haunted nightmare world? I hope that’s not what they’re doing, but just seeing the word Apocalypse following the word Scooby makes me deeply concerned, as does that Jim Lee picture up top making them look like a Cyberpunk D&D party and Velma’s piloting a drone and I have no idea what’s up with Shaggy’s mustache.

I’m not saying they have to do comics where it’s all exactly the same as when I was a kid. I’m saying don’t forget who the characters are. It would be like publishing a new Batman comic where he steals from the poor to give to the rich.

On the up side, Hanna Barbera had quite the stable of adventure cartoons, and it’s been long enough from the Cartoon Network days of mocking those characters that you could probably make a pretty solid comic line out of them. Just don’t make Birdman eat people or have Mightor constantly narrate his lust for conquest in a Sin City-eque series of monologues, please.