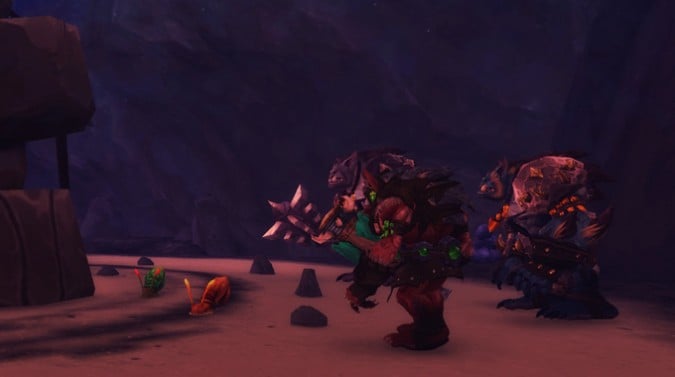 I’m pretty sure the last thing I ever expected to see in Legion was an underground snail-racing ring. But hey, I guess everyone needs something to amuse themselves with, right? Right.

During Algalon’s speech talking about systems being born and razed, he states “my own heart, devoid of emotion… of empathy,” then goes on to say, seemingly frustrated (an emotion), “I… have… felt… nothing!” Q4tQ: Is Algalon actually “devoid of emotion” as he states, or does he have emotion, as his tone suggests, and simply hadn’t felt those emotions until we came along to make him question his decisions?  Or some other option I haven’t considered?

I don’t think Algalon was literally devoid of emotion, I think the implication there was that he had been at this task for so long that it was almost a mechanical process to him at this point. He didn’t think twice about what he was doing, because nothing on those other worlds had ever bothered standing up and protesting what he was doing. Our actions snapped him out of it and made him suddenly realize that oh, hey, wait a minute, there are lives on this world, there are living creatures that actually care about what is happening to them — to the point where they will stand up and fight a titanic watcher, even if it means their own death in the process.

And if, on this world, there were creatures that would take those kinds of measures, what about all those other worlds he had destroyed? We not only snapped Algalon out of it, we forced him to confront exactly what he had been mechanically doing for millenia, and hit him with a truckload of guilt he didn’t know how to even begin to come to terms with. So no, Algalon definitely isn’t devoid of emotion. He just didn’t comprehend the magnitude of what he was doing when he was carrying out his task.

In the comic World of Warcraft Special Issue 1: Beginning and Ends, it’s revealed that after we leave Ulduar, Algalon decided to stick around and observe the creatures of Azeroth. He was really shaken up by what happened in Ulduar, and it made him question his purpose, and why the titans gave him that kind of purpose. So he wanted to try and figure out what exactly made us different, why we were able to snap him out of it when no other mortals on any other world he’d encountered had done so.

QFTQ: If you could work for Blizzard on ONE THING (i.e. gameplay or design or art or lore), what would you pick, and why?

There’s about a million different things I’d love to do, all story related of course, but I think what I’d really love to work on is what they’ve been lacking since Mists — short stories and other side material that isn’t necessarily covered in-game or through print media. Free, accessible digital media like short stories and comics is a good way to expand on existing canon and flesh out the story, and I like to think that people are a lot more likely to go out and buy a novel or a graphic novel if they’ve had at least some kind of introduction to that story via written word. You don’t get that kind of introduction by just playing the game.

Mists completely knocked it out of the park in that aspect, but it still had room to improve, and Warlords didn’t really take any steps forward on that front — there was an overwhelming amount of potential for short stories that just didn’t happen. I feel like story development in general shouldn’t just be focused on creating new stories, there should be some kind of focus on developing existing material and putting it out there, too.

Q4tQ: Mythic only bosses. Blizzard loves to include them, and I don’t see that changing anytime soon. While I am fine with the thought of the hardcore guilds getting an exclusive boss, my beef with Blizzard is how those Mythic only bosses usually have a large impact to the lore or even current expansion’s story. Many people saw Cho’gall and his storyline feature heavily in Nagrand, only to miss out on the conclusion during Mythic Imperator. What in your mind, is the best way for Blizzard to handle this issue in the future? Would it be better if Blizzard switched out Mythic bosses with the “filler” bosses, ie Twin Consorts become the bonus boss of Throne of Thunder and normal raids get to experience the Ra-den encounter? Or tell the story for all to see and hear, ala the speech given in Dalaran after the Algalon quest turn in?

Today seems to be the kind of day where I talk a lot about story stuff, doesn’t it? Okay, here’s the deal — I understand fully the desire to give Mythic raiders an extra something for going through the effort it takes to clear a Mythic raid. I used to do it myself — well, they were just Heroic raids prior to Warlords, but it was the same thing. I know what it feels like to slam your head against a boss for months, and how nice it feels to get something for that effort.

But I also know, in all those years raiding Heroic level content and playing the race for server-first game, that the majority of every raid guild I’ve ever been in really couldn’t care less about the story in the raid at all. They cared about mechanics, they cared about performance, they cared about loot and yes, to some small degree, they cared a little about what was going on story wise, but it definitely wasn’t a focus. NPC chatter wasn’t something that people read and focused on, it was something that happened in the background while everyone was getting ready for the next encounter and listening to the explanation.

So it’s weird to me that important story moments, like what happens to Cho’gall, or the Ra-den reveal, or even Sinestra’s part in the Bastion of Twilight are placed behind a particular difficulty setting. It doesn’t make sense to me, because the people that really appreciate that kind of lore reveal aren’t necessarily the people that are playing through that content. Optional bosses are awesome, giving Mythic raiders an extra piece of content to complete and an extra loot table to look forward to is fantastic, but I don’t feel like that encounter should necessarily be some kind of heavy story experience.

I think it bothered me the most with Cho’gall because Cho’gall himself was someone who was heavily featured in the leveling experience, yet you never actually got to see the end of that story unless you were a Mythic raider. He was an important character, and his story never got a complete resolution unless you were the kind of player that had the time and the desire to dedicate yourself to Mythic raiding. It didn’t feel right.

Q4tQ: What are your thoughts on getting dungeon quests inside dungeos vs getting them outside in the world? Getting them via questing ties them nicely into the story, but nobody finishes Vashjir or the Harrison Jones questline anymore, and not getting that nice extra dungon quest xp in those dungeons kind of feels bad.

On the one hand, I like the convenience of not having to go pick up dungeon quests from all over the world. On the other, it kind of creates a disconnect where the dungeon doesn’t feel like it relates to anything. I think my favorite dungeon as far as that aspect goes was Shadowmoon Burial Grounds, because everything you did in Shadowmoon Valley naturally led to that dungeon. Unfortunately, if you were a Horde player you didn’t see all those Shadowmoon quests — but at the same time, I feel like if a dungeon kind of organically comes out of an existing zone story, you don’t necessarily need outside quests to point to the area, you’ve got a good reason for going there regardless. Right now, Legion dungeons all seem to be organically tied to their zones in a way that works really well, on that front.

Q4tQ:  Remember when Shamans and Paladins used to be support classes? Back before the days of the holy trinity, 1T 1H 3DPS? I used to play horde back then, just to play a shaman because I liked being the assist guy, but I sucked at heals.  Just step back and help everyone else by pumping out those totems.  I think that’s why I went Bard in FF14.  I like to be support, I like that there is an option aside from HIT STUFF, GET HIT, or HEAL THEM! Is this something anyone else would like to see brought back as a spec, or am I all alone here?

Man, I think that’s the only thing I could see them reasonably introduce to break up that trifecta — a support class that works on the concept of either buffing or debuffing the players and mobs around them. It’s not really the most appealing kind of role for people, but I feel like it’s a half-step between healer and DPS that could actually be pretty appealing, if designed correctly. I don’t really see them introducing that at any point though, because the tank-healer-DPS dynamic works so well for the game already.

Basically, throwing a rating system into the mix works for a limited amount of time — the length of time it takes for people to figure out how to take advantage of it.

But putting all that aside, I kind of like Overwatch‘s method of finishing matches. You’re presented with a few categories of “Hey this person did really cool stuff,” and you can give someone an extra thumbs-up if you think their performance warrants it. I don’t know if it actually did anything for the players that got extra kudos, but it was a nice nod to players with great performance. I wouldn’t mind seeing something like that incorporated elsewhere.