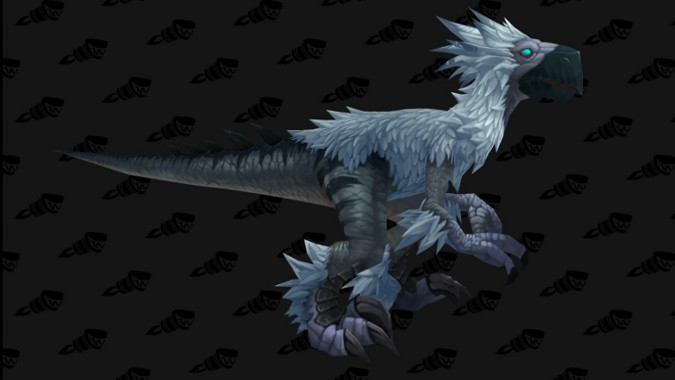 Yes, it’s a mythical animal and not an accurate representation of any actual dinosaur, but it’s so much better than we’ve ever gotten in WoW‘s history, I’m just ludicrously excited to see it.

Hi, this is the Queue. I’m back. It’s been a roller coaster the past two weeks. Thank you for everyone who offered aid, words of encouragement, or any form of support they could manage. Things are far from fixed, but we’re doing the best we can.

Now let’s do some questions. We’ll probably talk about the Legion alpha, so be warned.

Q4tQ: Do the Broken Isles have any treasure collecting or other exploring funtimes?

Yes, but as of yesterday they’re not fully implemented yet. Many of the treasures, when opened, hand you a grey item with flavor text that says “Wow, this will be an awesome treasure eventually” or some such. Consider treasures a work in progress at this point on the alpha.

I’m currently downloading a new build, so this may have already changed.

What lore figure/NPC (any Blizzard game) would you bring to Earth to be your BFF?

Honestly, I can count on one hand the various lore figures I think I would even have a chance of getting along with and have fingers left over. They can stay in their video games where I can stop paying attention to them when I’m done.

Yes, I even include Anduin Lothar in this assessment. I love him to bits as a fictional character, but I would not be down to clown with him as a real life person. For one thing, I’m a lot less violent in real life than almost any of these people.

QFTQ: Do you think Arms warriors should be more martial masters that strike quickly and beat their opponents through finesse? I’m thinking death by a thousand cuts versus massive strikes.

I’m having a ludicrous amount of fun with Arms on the alpha right now, and it does what I think Arms should do, it portrays the spec as somewhat similar to an Norse/Saxon huscarl, the ones who served as King Harold of Wessex’s honor guard. (You can see them on the Bayeux Tapestry, using giant two handed Danish Axes in combat.) They’re not berserkers like Fury, and they’re not sword/shield based, they have a single large weapon and it performs both as their offense and defense.

The Arms Warrior should be disciplined and brutal at the same time. Attacks like Slam, Mortal Strike, Colossus Smash and Overpower are perfect for them — these attacks emphasize how the Warrior is controlling and unleashing savage attacks that overwhelm an enemy’s defense. Rather than death by a thousand cuts, this is a series of strikes that exist to set up that one, horrible, crippling blow that everyone sees coming but simply can’t get out from under in time.

Q for the Q: Do you think WoW is stuck between a rock and a hard place, graphically speaking?

The recently announced system spec changes got me thinking about this.

I look at games like Paladins, Gigantic, Clash of Clans — these games embrace and celebrate their “cartoony” graphics, making a bright, fun visual experience.

Then I see games like Blade and Soul, Black Desert — these games push for “realism,” sometimes a little gritty, but overall very “pretty” to look at and game in.

And then there’s WoW. WoW has always been considered “Stylized” and/or “cartooney,” but with the Warlords character updates, and all the work they have been putting into environments and effects, it feels like WoW is trying to straddle BOTH styles – Cartooney AND Realistic. But by not committing to one or the other, it’s failing on both fronts.

Without a complete engine overhaul (like a WoW 2.0), Blizzard will never be able to make WoW realistic. And yet, they keep adding more and more stuff that moves the game away from “Stylized” or “Cartoon.”

Thoughts? Is it an impossible position? Are you fine with where the game is (graphically)? What would you add/delete/change if you could?

If I believed that they were trying to be more realistic, I’d probably agree with you. But I don’t believe that. In fact, the character revamp comes to mind as an example of a complete and utter lack of any attempt to make characters more ‘realistic’ — they kept pretty much every single aspect of character design that set them apart from anything approaching what things actually look like, and instead simply added detail.

Now, we could argue back and forth on whether or not something that is more detailed is automatically less cartoonish or stylized. I don’t personally believe that detail = realism. Detail is simply that, detail. My Draenei doesn’t look even a little bit more realistic, and absolutely none of the designs I’m seeing coming out of Legion look less stylized to me. Spiders do not work that way, to quote a friend of mine.

I do think you have an interesting point about the direction other games are going and how successful WoW can be if it tries to ape either direction, but I don’t think it’s trying to have its cake and eat it too here. I think we’re firmly on the same path we’ve always been on. There’s nothing of the real involved in Legion‘s art design. (Well, almost nothing.) Even that feathered dinosaur I cooed over at the opening of this Queue is nothing like what we believe actual feathered theropods looked like. Fanged beaks?

No, I’d argue that WoW is firmly still as unrealistic as ever.

Q4tQ: Rossi, I know it’s been mentioned before that you essentially have your “desk” on the floor, but I’ve tried using my laptop on the floor before and find it uncomfortable because I have to bend over/reach down so far to reach the keyboard.  Generally I am sitting Indian style when trying to do this.  My question is how do you work like this?  Is your keyboard raised somehow?  Do you sit in some style other than cross-legged?

This is my computer. I cropped the picture some but you can clearly see that I am writing this very Queue and I am indeed right on the carpet, no chair, no desk. I am not sitting up at all, I am laying flat on my chest/stomach. 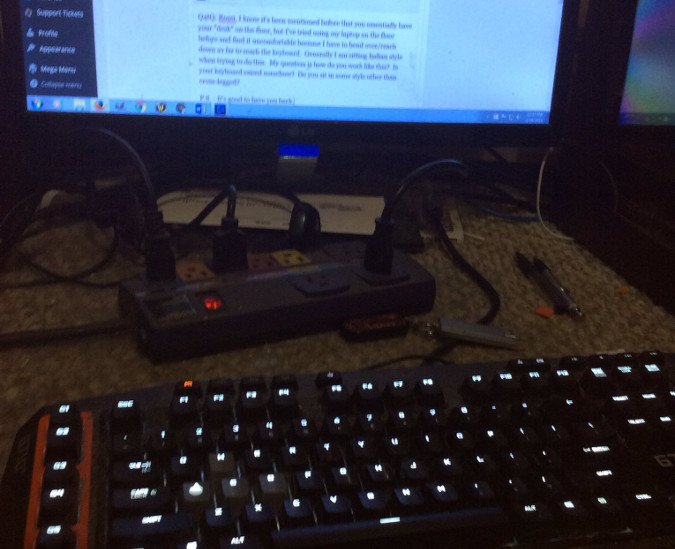 As to how I write like this, I’m used to it. I’ve been writing like this since 1996, I’ve written close to six books and all my columns and posts on the floor with a pillow under my upper chest to raise it up off of the ground a bit. Both my elbows are on the floor, and my forearms are extended onto the keyboard in much the same way they would be if I were writing at a desk.

I realize it’s ridiculous, but it’s how I’m most comfortable.

And that’s my first Queue since my eyeballs exploded. Hopefully they’ll improve and I can keep doing these again, I missed you guys.

Blizzard Watch is made possible by people like you.
Please consider supporting our Patreon!
Filed Under: Feathered Dinosaurs, My Eyes, Sorry It Wasn’t Funny
Advertisement