Breakfast Topic: How do you spice up your gameplay? 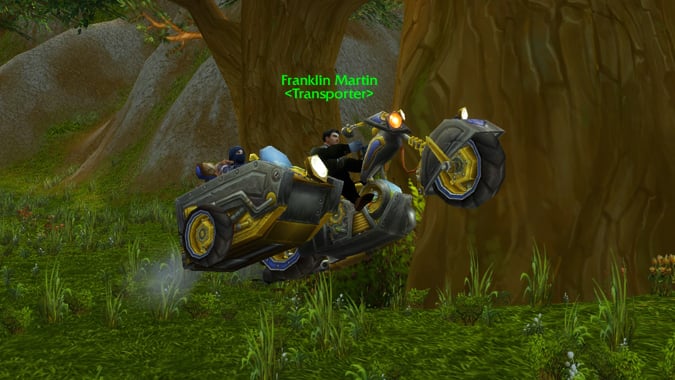 I’ve never been a melee fan. Healers and ranged DPS are more my thing, being able to stand away from the action yet still have an impact. The last time I tried to level a melee DPS class, I didn’t make it past level five… and yet somehow I recently decided to level a Rogue. I didn’t really know how I was going to slog though the boredom of a role I don’t particularly enjoy, in content I’ve done a million times, but a fluke made it unintentionally hilarious.

There I was, running around in my fancy chauffeured chopper, not really paying much attention to any of the starter quests, when I turned in the Rogue class quest. Jorik thanked me for my discretion and for being quiet, avoiding drawing attention to him. Oh… I guess he didn’t notice me doing wheelies and revving the engine as I blared up to his secret hidey hole in the shed.

This prompted a sort of roleplay-ish head-canon about how I’m a really obnoxious Rogue running around being kind of sneaky but not really. Now here I am, ambushing unsuspecting monsters from my very loud chopper, hanging out with my best pal Franklin Martin. We go everywhere together. Creating this story and playing it out in my head has added a completely new element to the quests that I normally ignored, making leveling and a class I didn’t care for quite fun.

Have you ever had this happen to you? How do you change up your gameplay to make things exciting again?