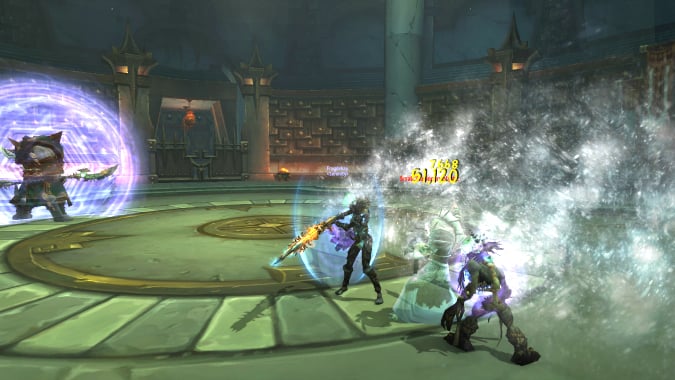 Fragnance, a Swedish player hailing from the EU guild <Serenity>, decided to pit himself against one of the most unique challenges that the game had to offer: the Endless Proving Grounds for DPS. As of Sunday he managed to pull off 429 waves of Proving Grounds on an Unholy Death Knight, before eventually wiping. Let’s check out how he did it.

For reference’s sake, Wowprogress tells us that the previous record was set by someone that managed to reach 399 waves. It also seems that Fragnance’s record also inspired other players to set off on their own journey, as he’s already been beaten by Shadli, a German Windwalker Monk that can boast an incredible 500 waves of Proving Grounds!

Given that Endless Proving Grounds are true to their name and have no pause/save option, and that each “wave” of enemies lasts for a fixed duration of 60 seconds, this would mean that even reaching a point such as 420 waves would require seven hours of nonstop play; eight hours to get past 480. Talk about endurance! You can view part of Fragnance’s impressive journey on the VOD he’s saved on his Twitch channel. His final wipe occurs at approximately 6:24:30 according to the timestamp. You can also watch Shadli’s final ten waves (490-500) on the video that he released yesterday.

Fragnance’s Death Knight armory revealed a clever strategy behind gearing for Proving Grounds. A large amount of items equipped were below 600 item level, which allowed them to receive old world enchants. Additionally, the relatively low average item level meant that certain slots could receive higher level items without increasing total character item level too much, since that is the metric the game uses to determine the type of health that Proving Grounds mobs scale themselves to. Both the Scabbard of Kyanos and Vial of Convulsive Shadows trinkets provided on-demand burst when needed, while the legendary DPS ring had the added benefit of being able to store up damage from preceding waves to be used immediately on successive ones.

The dedication put in by these players has also revealed an interesting fact about Proving Grounds. Despite being “endless” in terms of always continuing, it appears that there is a cap on their scaling — from Wave 255 onwards, mob health remained the same, and did not increase in successive waves. When asked to comment, Fragnance stated: “Only thing I could hope to be changed is either the ‘bug’ that they aren’t scaling past 255 is going to be fixed, or that they prevent the usage of lower ilvl gear/legendary ring, etc, to get an optimised mob HP pool, but still having performance [i.e. being able to kill mobs scaled down with powerful current-tier items].”

Regardless of wonkiness, such accomplishments are a testament to some of the amazing things that some people are able to do in this game, and also reflect on how many different styles of play the world of Azeroth caters to. We at Blizzard Watch look forward to seeing if this trend with Proving Grounds continues in the future!