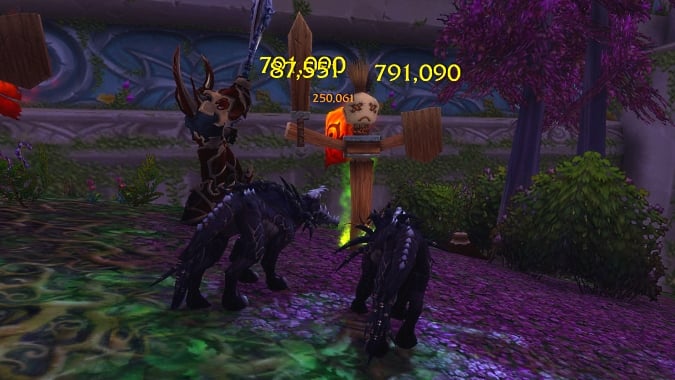 Last week we talked about some of the cosmetic and feely things with Demonology on Legion alpha, and a few days ago we had more cosmetic presents in the form of new demons and better-looking old demons. It’s time to talk about the spells and abilities that form Demonology’s new toolkit in Legion, even if most of them are still broken or not working in one way or another.

Demonology is still very much in flux — for example, the signature ability Demonic Empowerment has been at least half-broken for a long time, and the Beholder is the third current iteration of this cooldown’s demon choice. Thus, most of what I’m writing is done off feeling while playing the spec on alpha in both solo questing and group dungeons. We’ll get around to more solid theorycrafting when the spec starts producing less buggy alpha runs.

If you open up the Core Abilities tab in the spellbook right now on alpha, you get six spells: Hand of Gul’dan, Call Dreadstalkers, Demonic Empowerment, Shadow Bolt, Doom, and Summon Felguard. I know things might change from now, but what’s up there is not half bad. I would perhaps expand Demonology’s basic toolkit to a couple more spells, namely the AOE spell Demonwrath and the artifact weapon’s base ability, Thal’kiel’s Consumption, but I know that the Core Abilities tab only has room for six abilities. Life Tap is also a crucial ability for the Demonology Warlock, even if it’s not a target-damaging spell. 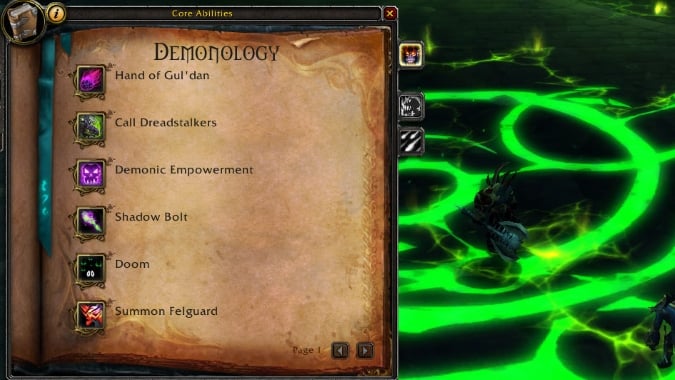 You build Soul Shards up, and when you have enough for whatever demon you want next, you spend them. It’s not a continuous bar that we’re used to, it’s a 1-2-3-4-5 discrete set of shards that are much like combo points, and numbers depend on what talents you pick, but you end up in some kind of build-spend-build-spend rhythm to cycle through your demons.

Your main generator of Soul Shards will be Shadow Bolt, which can be replaced by Demonbolt if talented. As of writing, this build has both Demonbolt and Shadow Bolt with the same 2-second base cast time, but Demonbolt will hit harder if you have more demons out. Demonbolt also unfortunately has one of the loudest casting graphics around, so it might require a little more situational awareness concerning your feet than Shadow Bolt will.

You can generate Soul Shards in some other ways. The level 15 talent Shadowflame will grant you one Soul Shard on cast, and it’s instant cast as well as a 2-charge spell. Doom will grant you 1 Soul Shard after it deals damage, which is about 16-18 seconds after you cast it. The AOE spell Demonwrath also has a 15% chance on damage dealt to grant 1 Soul Shard. So far in dungeons, if I use Demonwrath on a mob pack with 5-8 enemies, I build up to a full set of Soul Shards at the pace of 1-2 Shards per second. Demonwrath can also be channeled while moving, so it has become a nice Soul Shard generator on the move for me. 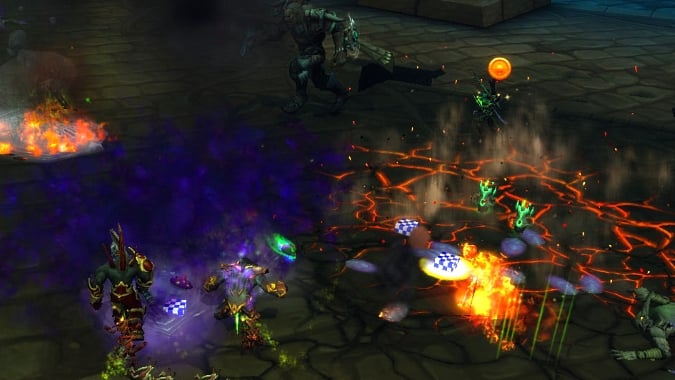 Demonic Empowerment is primed to be the signature spell for Demonolog, aside from all the unique demons we summon. Demonic Empowerment increases the haste (affecting attack/cast speed as well as energy regeneration), health, and damage done by the demons it buffs. If you pick the level 60 talent Power Trip, all of your currently summoned demons get the buff; otherwise, the buff picks the three strongest demons. After a bunch of testing with the regular version, the Demonic Empowerment priority hierarchy looks something like this:

It’s difficult to test if the top three are in the correct order because they are particularly unique-summon demons where you can’t have multiples to reach four or more summoned demons in order to rule out the lower demon. From testing various combinations of higher and lower pets out, the above priority is my best tested estimation of the buff’s priority so far. 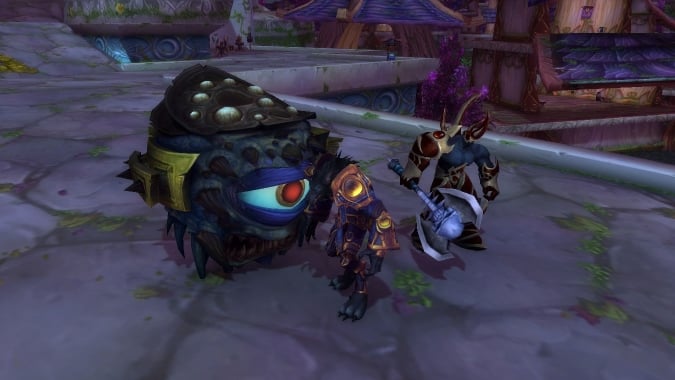 The other particular quirk of picking demons is that Demonic Empowerment will currently not buff demons that are already buffed. So you can cast it once to cover your strongest three, then cast it again to get the next three, etc… At this point, players were afraid we’d need an addon to track what demons we have out and which have been buffed, because optimizing this can get complicated quickly. Celestalon has posted, however, that in order to help alleviate tracking problems, Demonic Empowerment is set to receive a few not-yet-active changes:

Originally Posted by Celestalon (Official Post)
Demonic Empowerment has several issues currently; it’s not affecting the health and energy regen of most demons. Those’ll get fixed soon. Additionally, we’re planning to make it much smarter about which demons it buffs, reducing the need for tracking timing; it’ll just do the “right” thing, including giving it a ‘pandemic’ window.

Although we don’t know what “smarter” entails exactly, the mention of a pandemic window — where the buff will likely be extended in duration if it buffs a demon that is already empowered — speaks to me like it’s going to target your three higher pets a lot more than your Dreadstalkers or Wild Imps. Your primary pet of course lasts until it dies, but the Doomguard, Infernal, and Beholder last longer than the 12-second buff (20, 20, and 18 seconds respectively). A pandemic buff would keep your stronger demons covered for more of their duration. We might still want an addon to tell us how to keep our strongest pets as constantly buffed as possible, but this will definitely ease some of the tracking concerns for the current build. 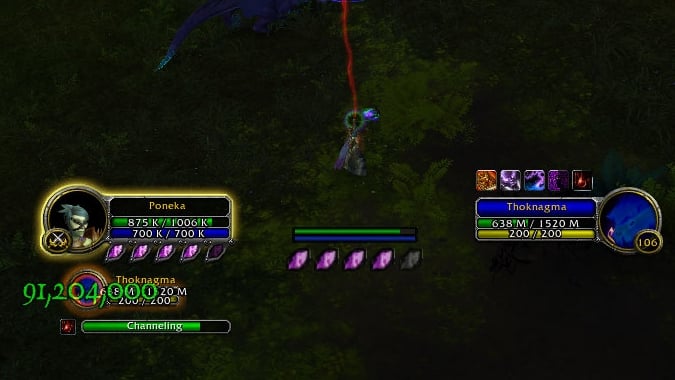 Better damage and faster attacks make sense for a demon buff, but what about increased health? Increased demon health is how the spec ties into its artifact’s base ability. Thal’kiel consumes about 10% of each of your pets’ health bars and deals all that damage to the target. Thus, the more health your demons have, the more damage you do.

Which is why Demonic Empowerment not increasing demon health is a significant bug right now. Grimoire of Supremacy also does not appear to increase pet health; your pet has the same health with or without the talent. But we know that Thal’kiel’s Consumption deals more damage with more health, not just because you can use it without a health increase on your already variously healthy demons, but because of a Shadow Bulwark bug.

Shadow Bulwark is one of the Voidwalker’s tanking cooldowns where it boosts its maximum health by 30% … or at least, that’s what it’s supposed to do. Instead, your Voidwalker currently gets about 3000 as much maximum health — which means that, even at mid-levels like 105, your Voidwalker has 1.5 billion maximum health. Since your pet heal works off your pet’s percent of maximum health, you get 90M heal ticks. It’s probably a fairly simple bug, where the code reads something like maxHealth*(1+30*100) instead of the intended maxHealth*(1+30/100). The difference between a multiplication and a division symbol results in hilarity where you can do things like deal 150 million damage in one hit with Thal’kiel’s Consumption, since the Consumption appears to deal with maximum health not current health.

The artifact itself is still very much a work in progress with some traits still shifting around, so I expect to tackle that next time. The maximum-level PVP alpha realm is out with fully upgraded artifacts, so we have plenty of testing ahead of us for the Skull of Man’ari.