The Queue: Pajamathur is the best 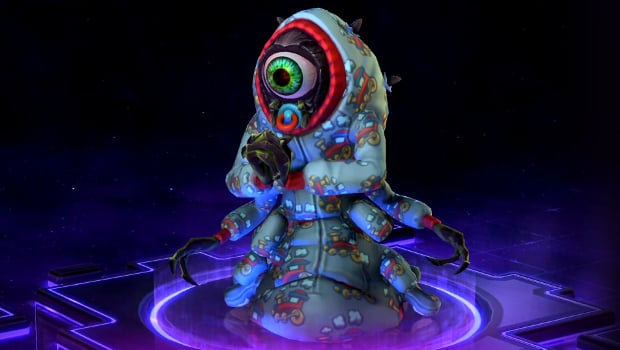 Wondering about the header image? I’ve got nothing to say beyond that headline. We didn’t even have any Heroes of the Storm questions today, but one fact is indisputable: Pajamathur is the best. There’s just no arguing with this sleepy Zerg cutie.

In fact, I think even myself and Mitch agree on this one, and we disagree on basically everything else. But what are we doing sitting around here arguing about what is an obvious fact? Mitch and I are here to tag-team your questions, so let’s get to it.

Okay, since I wrote that intro without consulting you, I have to ask. Is Pajamathur the best?

Mitch: That Pajamathur question doesn’t even need to be asked. Of course he is. The only downside to him is that he doesn’t have his own toddler-room themed map where the enemies are stuffed animals and the towers are made of wood blocks and the ground is covered in theme carpeting.

QFTQ: Do you miss reforging and/or enchantments on every piece of gear?

Personally, I liked having everything enchanted, even though there was a cost associated with it, especially when you get a number of upgrades.

Liz: So do I and I never thought I would say that. I hated reforging when reforging was a thing.

Mitch: I still think removing hit and reforging was redundant and took away a bit of personalization from gearing. Because it was always reforging to make sure you had enough hit but never, ever more than enough.

Mitch: Every single piece of gear changing meant reforging because hit. Which is why I like the new enchanting system more — it kept some around but made it less tedious and happen less often. Reforging being removed just took the bat and swung hard.

Liz: I don’t miss having to reforge everything every time I get a new piece of gear, but it hurts to have lost so much customization… and replaced it with nothing.

Mitch: I know 90% of the time you’d often reforge to the same exact stat. But not always, and especially in Warlords I’ve found myself switching talents around and needing different gear as a result. For example, the two main Shadow “specs” use different secondary stats as their main buff. I’d play a heck of a lot more of both if I could reforge between fights, but since I can’t, I’ve just been going for Mastery gear.

Mitch: Enchanting, though? I actually like the new system. I didn’t think I would, but I do. It’s nice to get a new piece of gear and not have to worry about finding the right enchant for it on the AH or finding the mats or whatever the case.

Liz: Now gear is so uncustomizable. And crafted gear is RNG terror.

Mitch: I haven’t even bothered with the crafted system. I don’t have the patience.

Liz: Basically, crafting, you craft a thing and the stats are random. If you don’t like it, you can craft another thing to reroll the stats on your thing. But the stats can be the same stats as they originally were. It’s infuriating.

Liz: It’s like Blizz heard we didn’t like reforging so they decided to make something even more frustrating.

Mitch: And so the pendulum thus swingeth.

Liz: I thought “anything would be better than this.” That was the problem.

Mitch: YOUR MAGIC BETRAAAAAAYS YOU

Q4TQ: Do you think the hatred of Versatility stems from the fact that it provides a non-DPS bonus in addition to its baseline bonus? While I agree it’s not sexy, have we become so overwhelmed with the notion of maximizing DPS that we no longer look for additional benefits?

Liz: Versatility bores me too much to answer this question.

Mitch: I don’t think the damage reduction is why people dislike it. Truthfully, the damage bonus is one of the major reasons I do see it having any appeal. It’s not really noticeable, though, unless you’re looking at logs, so I don’t think people realize the true benefit they’re getting. The main reason I think people don’t like it, though, is that it’s kind of boring.

Mitch: There’s nothing special about “your damage is increased by X%.” And when it takes the place of Crit or Haste or any other secondary that some classes really find useful, it becomes even more frustrating.

Liz: I rate Versatility slightly higher than Mastery for my Windwalker main. Which is probably only funny to other Windwalkers.

Mitch: To top it all off, it seems like Blizz has tossed it on a lot of gear. And no matter how not-that-bad something is, if it’s shoved in players’ faces, there’s going to be a natural inclination to get annoyed by it.

Liz: It’s a minor DPS decrease from whatever your preferred stat would be. But since it’s not the absolute best damage stat, it’s universally eschewed.

Mitch: It feels like it’s on the border of being a tertiary stat but it’s taking the slot of a secondary stat and there’s nothing unique or tangible to show for it. But because it does have a more significant effect than a gem slot, Blizz would never make it tertiary. So it’s stuck in a bit of a limbo between useful tertiary and subpar secondary.

What are the odds our battle pets will one day rise up against us?

Mitch: Dude, have you seen the way those things follow you around the garrison? One time, I had a kite just, like, sneak up on me. It scared the crap out of me — but the worst part is that it wouldn’t go away. It just followed me. Emotionless. Cold. Calculating. So you ask me what the odds are they’ll rise against us and I tell you only, “Prepare yourself. They will come.”

Liz: We’d better just hope they aren’t allied with the Burning Legion. They’ve already infiltrated our garrisons and our hearts.

Holy crap! I haven’t checked on y’all in a year and you guys are still here! I’m so glad! That’s awesome =]

So my question (which I’m sure you get fairly often): As someone who left WoW after the first month of WoD, is there enough content now to keep me busy until the expansion comes out?

Again, I’m SO HAPPY to see y’all are still at it!

Liz: Welcome back! We’re just as happy to still be at it. This is Mitch, he’s new.

Mitch: YAY! I’m glad you found the site. Always nice to see people re-discover us :) Second of all, hi, I’m Mitch. I’m basically in charge now and the site is MitchWatch in all but name.

Mitch: Don’t listen to what my underlings say about actually being in charge; they’re full of it. Especially Liz, who consistently makes poor life choices with regards to alcohol.

Liz: I don’t have any vodka in the house and I somehow feel as though it’s your fault.

Mitch: It is, because vodka’s the worst and I’m doing my civic duty to remove it from everywhere.

Liz: It’s the best alcohol to add to fruit juice and for some reason I have a lot of fruit juice in the house right now. Vodka plus fresh-squeezed orange juice? Amazing. Hits all the major food groups.

Liz: Listen, I have whiskey and kahlua in the house. Neither of them work with orange juice.

Mitch: Sounds like you should reconsider your life choices.

Liz: Sounds like I need to buy vodka… wait, was there a question we were supposed to be answering? About things to do in Warlords?

Mitch: One of the things I think people misconstrue when it comes to Warlords is that there’s nothing to do.

Liz: Mostly because there were so few patches  — only two!

Mitch: There is a lot to do.

Mitch: The problem is that it depends on how you play the game and what you enjoy doing. A lot of the stuff that you can do right now feels pretty grindy after you get over the initial hump of activities. Warlords had me unbelievably hooked on the garrison for the first few months and then I got bored. I’m nowhere near close to having everything done that I could, but I’m also not interested in that. If you’re a completionist who loves filling in every last bit of everything, Warlords will keep you busy well beyond Legion.

Liz: In addition to playing collect all the things, there’s also the legendary quest line, three raid dungeons (which you can play through LFR to see the sights if you’re not looking for a hardcore challenge), and the shipyard and the whole Tanaan Jungle zone, which is kind of like Timeless Isles on steroids. There’s certainly enough to keep you busy for a while… though without knowing  when Legion is coming, it’s hard to say how long. But if you’re interested in playing, come back and play for as long as it’s fun for you to play.

GWENHYFAR OF THE SLEEPLESS NIGHTS. SAID:

Liz: Even though this isn’t a question, I wanted to bump it up. I know everyone’s excited for Chronicle and if you’re picking up a copy and also want to support Blizzard Watch, this is the link to do so. It doesn’t cost you any more, you just have to click the link before you buy. Thanks, Gwenhyfar, for thinking of us!

That’s all for today’s Queue but as you all know there will be another Queue tomorrow! So leave your questions in the comments and check back for another batch of answers.

Blizzard Watch is made possible by people like you.
Please consider supporting our Patreon!
Filed Under: Battle-pets, Pajamathur, Pajamathur Is The Best Abathur, Q&a, Reforging, Versatility, Warcraft Chronicle, Warlords Of Draenor
Advertisement