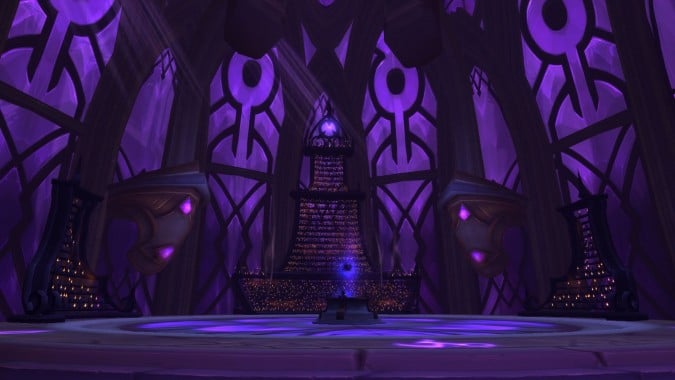 Some things change and some things stay the same. The Legion alpha is not the latter. Since we last went over Shadow Priests in the alpha, we’ve received some visual love in our class hall to make the Shadow portion feels more like a place we can call home. A terrifying, Insanity-inducing home. Bigger news, though, is the addition of PVP realms that come with their very own, fully geared level 110 character — with a completely finished Artifact tree. This has given us the opportunity to experiment with some of the brand new abilities that we’ll be treated to when our Artifact is stronger.

So without further ado, let’s (quickly) talk about the Priest class hall and then dive headfirst into our Artifact’s talent tree. 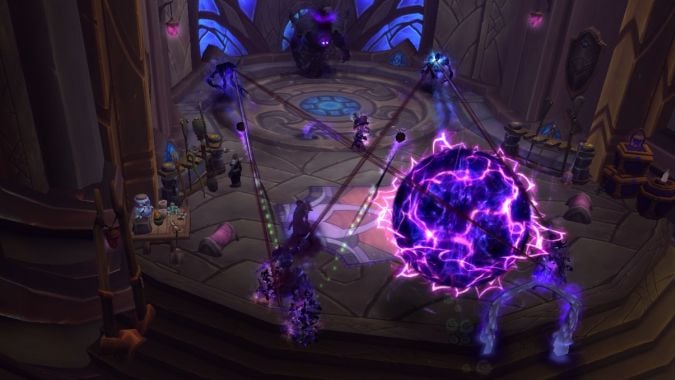 Adding a splash of Void to the class hall

As you can see from the above images, Shadow has gotten some improvement in the class hall. All in all, the changes are relatively minor but still have the feeling of solidifying Shadow’s place in the hall. Having candlelit altars and a central Shadow shrine makes it feel as though we’re not just being herded off to an empty purple room. It’s not full by any means, but it’s a marked improvement over the original room.

Moreover, we’ve also been given our own little Shadow training area, complete with Void Wraiths and a Void Walker that serve as target dummies. Again, it’s a small adjustment but when you have multiple Shadow Priests gathered in one location, all casting spells and practicing rotations, it looks awesome. Mind Flays are flying in all directions, Void Spheres are spawning left and right, Shadow Apparitions are floating menacingly to their targets, and there are more tentacles than [REDACTED]. Basically, any other Priests stealing the rest of our hall’s space will probably just want to stay away, as it ought to be. 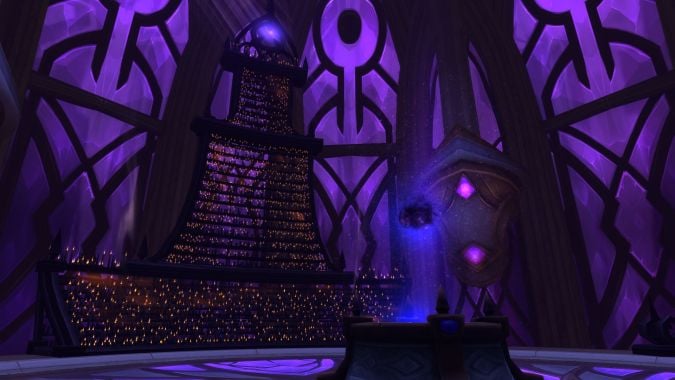 So what’s still missing? Personally, I’m still hoping we can alter our Artifact inside the Shadow portion of the class hall instead of using the giant, light-bathed altar. This was true before but is especially true now that our side room has a central altar that would function perfectly as a place to bathe our weapon in Void and increase its power. As it stands, the Shadow room doesn’t really… serve any specific purpose. It looks cool, sure, but outside of Recruiter B there’s no real reason to go in there.

Additionally, I would still like to see some Shadow Priests in the hall. Yeah, they’re technically wandering the class hall but they’re wearing a Mage’s armor and not actually in Shadowform. The hall has received updates over time and having full-fledged Shadow Priest NPCs (with their own names!) would help solidify the space as a true home to Shadow Priests. 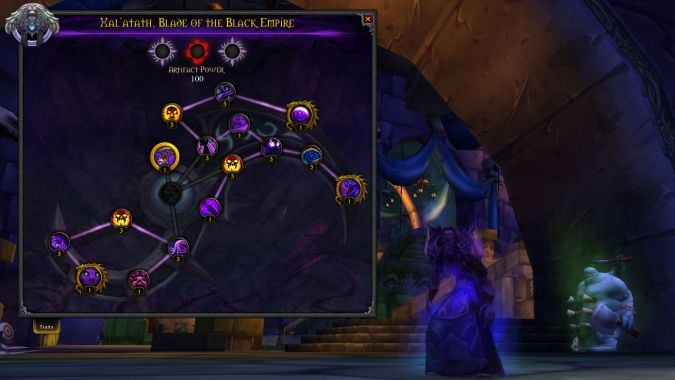 But class hall adjustments — important though they may be — are not the main story here, because the recent build has given us a first look at a fully fleshed-out Artifact tree. Lots of comparisons have been made about the Artifact talent trees being eerily similar to the vanilla WoW talent trees. And while they’re not entirely inaccurate, I think they do a bit of a disservice to some of the standout talents that Artifact trees offer us. Namely, I’m talking about the Big Four: Mass Hysteria, Void Torrent,  Call to the Void, and Sphere of Insanity.

Let’s start with the oddball of the bunch. Mass Hysteria doesn’t offer the same type of appeal as the others. Mind you, it’s incredibly strong; as it stands right now, it increases the damage of our DOTs with every stack of Voidform and will likely offer between 100 and 150 percent increased damage from DOTs. What makes it an oddball is that the others offer really impressive visuals where Mass Hysteria, well, doesn’t. It does, however, make up for a visual absence in its complex alteration to our playstyle and chance at separating different skill-level Priests. With Mass Hysteria (and the absence of snapshotting), timing our DOTs will be more important than ever. We will not only want them active as long as possible during Insanity, we’ll also want to make sure they start at max duration so we’re not recasting during Insanity.

Now, this was always the case, but with damage increasing every second, DOTs only ticking every 3 seconds, and non-DOT spells being the only way to keep generating Insanity, mistiming our DOTs or just blindly activating Voidform as soon as it’s ready will have a much larger effect on DPS. It’s an interesting mechanic and likely something hardcore players will want to keep an eye on our theorycrafting overlords for.

But like I said, Mass Hysteria is the oddball. The others are a showcase for what I had hoped to see out of Legion spell animations many months ago. Void Torrent is the first one you’ll get, as it comes default when you obtain your Artifact. Why do I like it so much? It not only provides an animation that incorporates your weapon (nearly unheard of for casters), it also channels an intimidating beam that deals massive damage. Basically, it’s the whole package you’d want in an Artifact ability and getting it right away sets the tone for what’s to come.

The next big talent is Call to the Void, which gives your Mind Flay/Mind Spike spells a chance to summon tentacles that will attack enemies with Mind Flay. If it sounds familiar, it’s because it used to be a passive effect that came with our Artifact talent (more on that below). What’s nice about this one is that it isn’t as complicated as Mass Hysteria but it still finds a way to increase our damage and bring the same level of flavor as Void Torrent. It’s hard to say if it’ll be worth it as a first choice for what talent we pick, but it’s still cool and I’m glad to see it in the game.

And lastly, Sphere of Insanity. The best of them all. Unfortunately — though for obvious reasons — its original size was given a bit of a nerf. This was more recently supplanted by an entirely new visual (seen to the right above). Despite its changing graphic, it’s still managed to steal my cold, dead heart. Much like Void Torrent, it’s a talent with a bit of everything. It has one of the coolest visuals of any Shadow spell, its effect is incredibly powerful (especially for multi-target fights), and its a talent that will once again help to divide the pros from the amateurs while still providing a significant buff to players of all skill levels.

All in all, the Big Four talents for Shadow feel like a good blend of powerful, visually unique, and fit for diverse situations. We’ve got a spell that adds to our Voidform rotation, a passive that helps increase damage in any situation, a cool-looking ability that will help with multi-target and single-target fights alike, and a complicated talent that will require some finesse to master. I don’t know about the other classes’ talent trees, but Shadow’s is shaping up to be very nice. 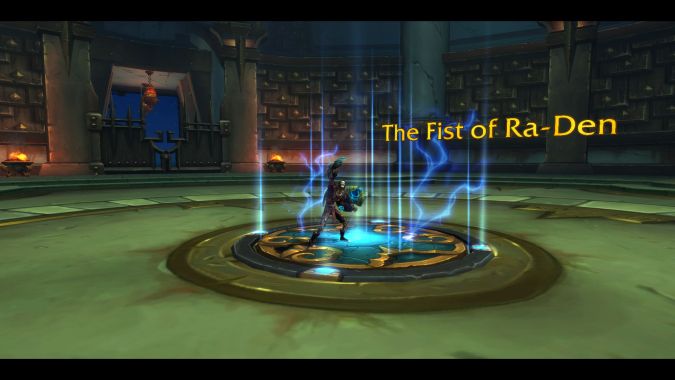 As you can tell from the image above, all Shadow Priests can now also double-dip as Enhancement Shaman. This will add a very interesting playstyle adjustment to our class that should probably have its own article but instead I’m going to cover quickly here — okay, you got me. None of that is true. But I can never resist sharing a classic alpha bug image.

But moving back to serious commentary, the reviled change to Surrender to Madness has been reversed. It now functions as it did originally, with no penalty for using it. Well, outside of dying horribly. This once again means that we can use an offensive combat resurrection if need be, which I will continue to praise as a good move on Blizzard’s part. My one complaint remains that it’s too niche to exist as a talent and I would instead love to see it added to our regular toolkit as a cooldown. 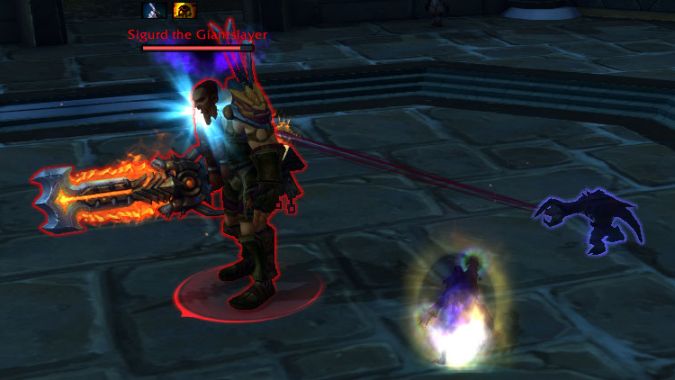 Because I am cursed, however, Call to the Void recently replaced Power of the Old Gods as an Artifact talent. As I mentioned above, Call to the Void used to be a passive effect that came with the acquisition of our Artifact weapon which some people described as “tenta-cool.” For a short while, this entire effect had been removed in favor of giving Artifacts only one bonus ability instead of two (the other being Void Torrent). Meanwhile, Power of the Old Gods remained a talent that replaced our Shadowfiend/Mindbender with a miniature Faceless One and was one of the talents I had been most excited about. And while the removal of the original Call to the Void was very tenta-uncool, the fact that bringing it back meant replacing Power of the Old Gods is kind of saddening. Having a tiny little Faceless One spawn at your side was not only terrifyingly adorable, but also another aspect of Legion that seemed to really lean toward building the Shadow class fantasy.

Admittedly, having a Void Sphere, a couple tentacles channeling Mind Flay, and a tiny Faceless One created a bit of visual clutter; still, with a pseudo-cooldown on all those abilities and the existence of abilities like Stampede, I don’t think it would have been too much to keep them all in the game. Overall, though, Legion’s take on Shadow continues to please.  Visuals are constantly being refined and improved to feel more tied to the Void; gameplay is feeling solid; and our Artifact traits feel interesting without being too overwhelming.

That’s all the time we have this month, though. Next month, we’ll be taking a look at Blizzard’s next attempt to laugh at my Shadow Word release schedule, whatever that may be. Until then, always remember: if you stare into the Void long enough, you gain cool abilities and nothing bad happens at all.