Shadow Word: How does playing a Legion Shadow Priest feel?

Thank the Old Gods, Shadowform is back! Not only is it back, but it brought with it a friend: the new and improved Voidform visual effect. The out-of-combat Shadowform looks like the glyphed version on live — but as you gain Insanity, your Shadowform gets darker and darker until finally growing tentacles and entering a completely awesome-looking Voidform. I’m so happy about this that I’ve decided to forgive Blizzard for releasing a patch that made two-thirds of this post’s original content obsolete.

But Voidform is just the edge of the shadow. Since last month, I’ve had some time to give WoW’s best spec a more thorough playing-through and I’m happy to report that it’s (almost) all positive! Last night’s update did bring some changes with it that I haven’t had a chance to test but none quite so significant that we can’t still discuss Legion Shadow Priest gameplay thus far. So without further ado, let’s dive into a (spoiler-free!) look at how Shadow’s gameplay is shaping up on the Legion alpha.

First up, let’s talk about questing and the solo experience in general. I’ll admit, the first time I started playing around in Stormheim, I found Shadow to be far too squishy. Where Warlords allowed me to throw Shadow Word: Pain on everything in sight and jump around like I was at a party, Legion made me feel like pulling an extra mob or two would result in defensive play and possibly even cooldown usage. That changed a bit when I realized Vampiric Touch has become the spiritual successor to Devouring Plague, with each tick of damage healing you. Yes, it’s for a smaller amount each time, but it’s also for a much longer duration. As a result, Vampiric Touch has gone from a soloing spell that (for me, at least) fell to the wayside to a soloing spell you’ll want to prioritize in order to maximize survival.

The two downsides to soloing right now are the Insanity rotation and Vampiric Embrace. The Insanity rotation’s main problem is that it feels somewhat difficult to make full use of during questing. Often times, I’ll find myself either reaching Insanity just as an enemy is about to die, or booking it from enemy to enemy to maintain just a little more uptime — and even then, it’s usually pretty limited. Even though Insanity drains more quickly the longer you’re in Voidform, it would be nice if the initial drain were slowed down (with the later drain possibly sped up to compensate). It’s worth noting that last night’s patch reduced our overall Insanity generation, but the drain rate appears to still be the same — which, if anything, nerfs the uptime on Insanity during questing even more.

As for Vampiric Embrace, it was recently nerfed to only heal for 3% of damage dealt. As much as multiple targets with Vampiric Touch means being able to keep yourself alive, Vampiric Embrace seems to continually get nerfed with each expansion and slowly fade out of relevance. On a single target you won’t be healing for that much, which means both solo and group content will likely find its healing just barely noticeable. Yes, we have Shadow Mend when we really need it. It can be very useful. But Vampiric Embrace has been one of the staples of Shadow since its inception and I really hate to see it made less and less effective. If Blizzard wants it to be a less powerful raid cooldown, fine, it can be. But at least let it heal the Priest for a higher percentage. It’s worked that way in previous expansions, and was a nice way of balancing a powerful raid cooldown with a reliable self-heal. 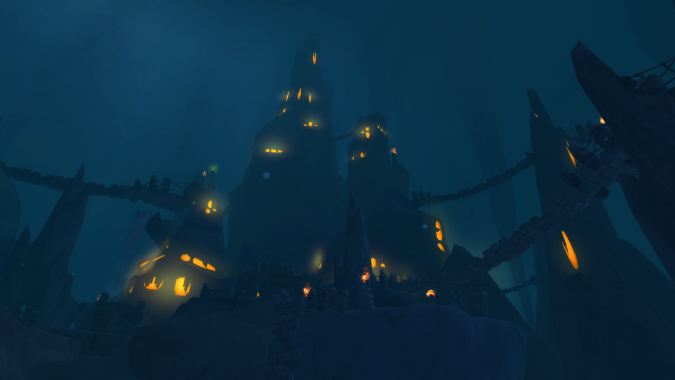 While the dungeon experience during trash can feel relatively similar to soloing, I still wanted to highlight it because it’s where the new Insanity mechanic really comes to life. My first pass of Insanity critiqued it for feeling a bit too simplified. After playing with Insanity on longer-duration fights, the simplicity actually seems to fit much better with the feeling of going insane, and this is all thanks to Void Bolt. The longer you’re in Voidform, the more Haste you gain, and the more Haste you gain, the lower the cooldown on Void Bolt. As a result, you always need to be monitoring it to see when it’s going to be off cooldown.

This may change once Priests have gotten used to their rotation, but for now, the increasing Haste/Void Bolt combo throws a wrench in the muscle memory of our standard rotation. Things get more and more hectic feeling the longer you’re insane and I’m not sure more buttons would be a good thing at this point. It’s also a nice way to combine the Clarity of Power playstyle with the standard Shadow playstyle into one uniform rotation (especially if you take Mind Spike at level 100).

The caveat to this is that I’ve been taking Shadow Word: Void for my level-15 talent. It adds predictable burst to Insanity generation when needed and gives you the occasional extra spell to cast during Insanity. Even if you opt to not take this spell, though, I think Insanity’s rotation feels very good right now and will only feel more suitably chaotic as you try to balance fights with more adds and as Haste levels climb throughout the expansion. 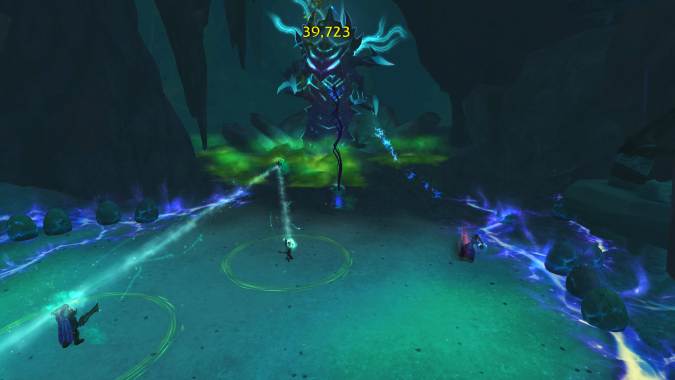 You’ve got no talent!

I know I’ve gone over some talents before, but I want to revisit a few in particular here. To start, let’s talk about the ones whose absence feels the strongest. Up first: Void Entropy. After such heavy use and reliance on this talent throughout all of Warlords, playing without it as part of every Shadow Priest’s standard rotation just feels strange, and off, and we should really get it back and —

Haha, okay, let’s be real though. Angelic Feather has been the no-contest talent choice for me for the past two expansions and not being able to use it on demand makes me feel much slower. It’s not really a game-breaker — and if you already had been using Body and Soul you won’t notice a difference — but considering Masochism’s awkward placement in the “movement” tier of talents, I would much rather a Shadow version of Angelic Feather to fill the void left by its absence. Outside of the near-passive speed increase Angelic Feather offers, I never realized how much of a difference it makes needing Body and Soul during your standard rotation.

I’ve trained myself to use Power Word: Shield throughout Warlords for the reflective glyph’s effect, which meant Angelic Feather was saved for on-demand movement needs; namely, escaping one-shot mechanics from bosses. Its absence means I not only need to remember I don’t have as on-demand a speed increase, I also have to stop myself from casting Power Word: Shield as often because moving out of danger now relies on it.

The other talent I miss most is Void Tendrils. I was actually pretty psyched when it was announced we’d be focusing on Old God lore, because it meant Void Tendrils’ place in our toolkit has a greater meaning in retrospect. Now, however, we’ve lost Void Tendrils. It’s not just an ability that feeds into our class fantasy, it’s also an incredibly useful talent for soloing. Again, maybe you don’t use Void Tendrils as much as I do, but Void Tendrils –> Shadowfiend –> Fade has been one of my primary methods of soloing. Void Tendrils have proven to be an excellent tool in keeping enemies away. Mind Bomb is a cool pseudo-replacement, but I miss my creepy Old God tentacles, and it’s once again one of those talents I never realized I used as much as I did until it was gone.

Okay, you’ve got some talent

As far as new talents are concerned, I had a whole big paragraph typed talking about Surrender to Madness and then Blizzard decided to sneak in a little change to it in last’s night’s patch that pretty much makes it useless: “After surrendering your soul, you cannot be revived by in-combat resurrection abilities for 3 min.”

Sorry, what? This spell went from being incredibly situational but possibly the first offensive use of a combat res to, at best, an oh-crap button to prevent 1% wipes and, at worst, an extra DPS boost on a kill you’re already confident you’re going to have. It’s really disappointing to see this because I had been so excited about this talent when I first heard about it and even praised Blizzard for taking a risk with talent design.

In my ideal world, Surrender to Madness becomes a cooldown that’s either part of the standard Shadow toolkit or an Artifact trait we have to work toward, and the in-combat resurrection limitation is removed. This would allow Blizzard to add a third level-100 talent that makes all three options in the tier meaningful for various playstyles, while still keeping the very unique design of the ability intact. Whatever the case, I don’t want to see this ability go, and I also don’t want to see it gutted before it even makes it live. 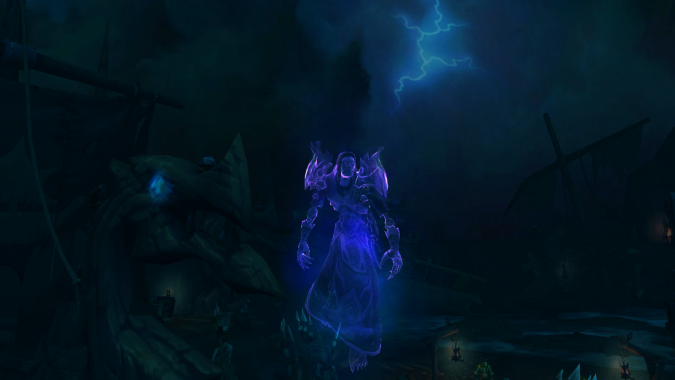 Lastly, there was another change (and some datamined set bonuses) that may significantly alter Shadow play. Auspicious Spirits is now much more in-line with its Warlords iteration and will generate Insanity whenever a Shadowy Apparition deals damage. To add to this, the Tier 19 two-piece bonus adds Insanity generation to Shadow Word: Pain and Vampiric Touch, while the four-piece bonus removes the cooldown on Void Bolt for 6 seconds after entering Voidform. These changes alone are worth a hefty discussion, but I wanted to point them out here because it’s nice to see Blizzard trying to find a way to fit our DoTs into the Insanity playstyle. Time will tell if these changes stick, but Shadow gameplay is looking very promising right now.

Until next time, always remember: your friends will abandon you, but Shadow will forever be by your side.