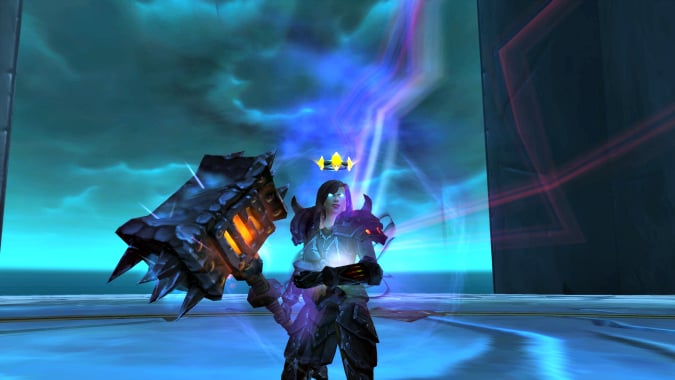 In my previous Death Knight article, I outlined the functionality of mobility as a feature of gameplay in World of Warcraft. I also covered different types of mobility, as well as some of the changes made to Death Knight mobility on the Legion alpha up until now — hopefully most of you recognized this as a way of setting the stage for today’s discussion, which will continue where we left off.

Specifically, I’d like to focus on how Death Knight mobility is currently looking on alpha and what my assessment of that situation is. 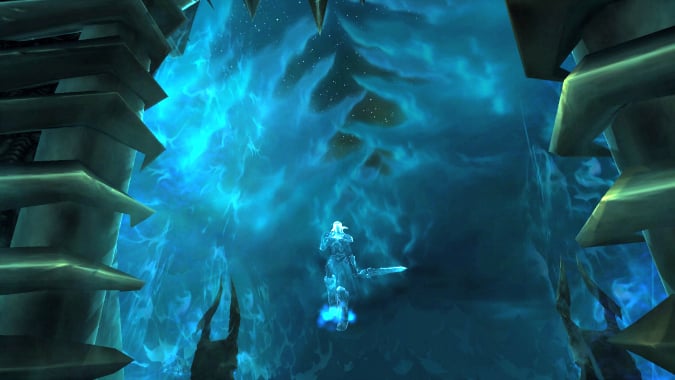 As I noted towards the end of my previous column, DKs have received a baseline mobility button in the past few alpha builds: Wraith Walk. At the time this writing, Wraith Walk operates in the following manner: Activating it breaks any existing root effects on the Death Knight and increases their movement speed by 70% for three seconds. All movement impairing effects are suppressed for the duration of this buff, but it has the flipside of also pacifying the casting Death Knight for its duration — some defensive abilities can still be used during the pacify. Wraith Walk can be cancelled by pressing the button again, which is partly why it’s currently on the global cooldown (i.e. rapidly spamming the button won’t instantly cancel it unless you spend another GCD doing that).

Both Frost and Unholy Death Knights both have talents that affect Wraith Walk:

When it was first introduced, Wraith Walk was considerably weaker — it had a two minute cooldown with a two second duration, and would have been easy to dismiss as being insufficient to fulfill what I believe should be a baseline amount of mobility that every class in the game should have access to.

To be clear, as I noted in my previous column, I don’t object to the notion of a spectrum of mobility, or even to the notion that Death Knights should be on the lower end of that spectrum (the “fantasy” argument is a shoddy one, but that’s a separate discussion!) if we have adequate compensation in other areas of the game. This has successfully been the case for the past two expansions. There is, however, a considerable gap between “low mobility” and “effectively no mobility,” the latter of which was the point that alpha DKs were at for some time. Now the comparison between live and alpha comes closer and thus becomes more interesting. 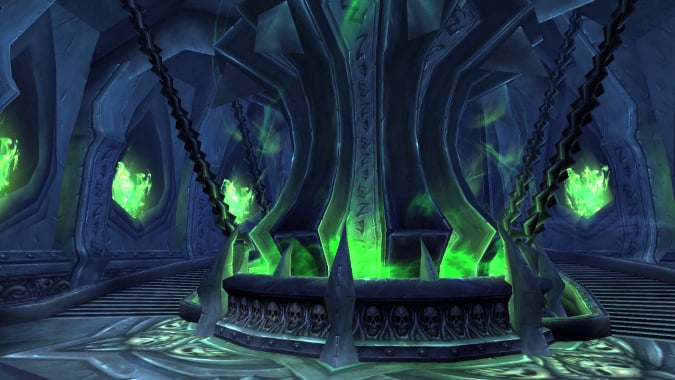 A matter of context

Ultimately, evaluating a mobility effect isn’t just about the effect itself — it’s about what the larger package provides. Let’s take the Warlords Death Knight as an example: outside of the fact that Death’s Advance is a talent (and thus tends to take “choice” out of the equation), I haven’t had any complaints about the amount of mobility that it has granted our class thus far. Let’s think about what else we bring to the table on live: double interrupts with Strangulate, Gorefiend’s Grasp which has often proven invaluable as a unique form of utility, roots such as Chains of Ice, potent crowd-control breaking tools, an enviable number of defensive cooldowns in the case of Blood DKs, and strong AOE damage with ranged capabilities for all three specs. There’s probably more I’m forgetting, but you see my point.

Now, I want to be clear: part of what makes mobility so important in World of Warcraft is the fact that its effects are so omnipresent throughout the game. It’s a fair argument to say that the tools I’ve described above can be quite circumstantial and not always useful in cases where just getting from Point A to Point B more quickly would be the best scenario. That said: have they been “just enough” up until now? I would argue that they have.

Therein also lies our concern: going from Death’s Advance to Wraith Walk in Legion isn’t simply a matter of trading one for the other. Consider how much our baseline toolkit is also changing: Legion sees Strangulate become a PVP-only talent, while Asphyxiate becomes Unholy-only, and on a two-minute cooldown. Blood DKs lose access to Chains of Ice, which has been a mainstay as part of their root abilities. Gorefiend’s Grasp is no longer available to Frost or Unholy Death Knights, and exists on a hefty three-minute cooldown for Blood; this cooldown can be reduced by 60 seconds via a talent, but ironically that locks us out of our other potential CC-break option. Remorseless Winter, now a Frost-only ability, can have its current stun option talented back into by only that spec. As I’ve also noted in earlier articles, things such as bursty AOE, damage dealt at range, etc, have also been comparatively weakened.

I would also be remiss without mentioning our “unstoppable” theme, since it’s something I constantly hear being brought up by both players and developers — the notion that if a Death Knight must be “slow,” then it should realistically be impossible to halt their steady advance and that they should be hard to get rid off. Remember that Blood DKs lose Icebound Fortitude as a stun breaker and that the entire class loses access to the Desecrated Ground talent, currently one of the most powerful anti-CC abilities in the game. Ironically, Death’s Advance also fit the notion of being “unstoppable” quite well due to the fact that it actively suppressed slows for its entire duration. Add in the fact that Anti-Magic Shell has had its cooldown raised, Death Pact has been removed from the game, and Purgatory is a Blood DK-exclusive talent, and you can see what I’m alluding to. 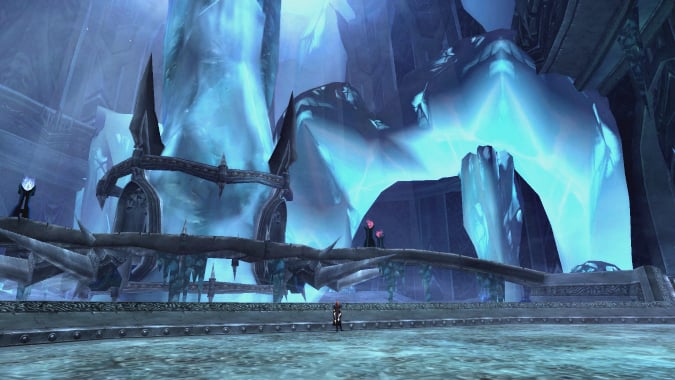 How does Wraith Walk size up?

The point of mentioning changes to our toolkit isn’t to complain as if we have the misfortune of being unique in this regard. A simple glance at Legion class design reveals an overall reduction to the number of crowd control options, defensives and immunities in the game; thus it’s only natural that Death Knights would be counted among this. What is a matter of concern is what our existing mobility toolkit will need to look like in this new world. So how do I rank Wraith Walk in the Legion context? It’s obviously better compared to what it was in the previous build, but how does that stack up compared to what the expansion is throwing at us? This is where comparisons to Death’s Advance can be useful since they allow us to understand how transitioning from one to the other would work.

First, let’s lay all the cards on the table: Death’s Advance provides a passive 10% movement speed increase, an additional 30% sprint when activated and also suppresses slows for the duration of its active portion. Being a six second duration on a 30 second cooldown lets us use Death’s Advance frequently, which means that despite being the slowest class on average Death Knights can still reliably use it on most urgent mobility checks. Even better? It’s off the global cooldown, which means it can be activated while carrying out a standard rotation with zero disruption. In terms of raw numerical gains for the sprint component alone, Death’s Advance grants a total of 40% (remember, it’s 10% baseline and an additional 30% when activated) movement speed increase over six seconds, i.e. a total of 240% more distance covered for the active duration. I could have chosen to be unfair and also count its passive effect being up all the time, but let’s assume we’re solely looking at the sprint for now.

Now let’s consider Wraith Walk: I already went over its various components at the start of this article, so we’ll jump ahead to the same raw numerical gains we calculated for Death’s Advance: a 70% movement speed increase over three seconds means a total of 210% more distance covered for the active duration. Unholy DKs that talent into Lingering Apparition benefit from a full 100% movement speed increase for three seconds, granting 300% more distance covered over its duration. As I noted earlier, Wraith Walk is on the GCD unlike Death’s Advance; this is probably because it can also be cancelled by tapping the button a second time during its duration. But why is this? Why would Blizzard grant us the ability to so easily cancel an ability that is already used with much less frequency than its predecessor? This is where we get to what I consider to be the single biggest difference between the two: the pacify effect. Utilizing Wraith Walk means making an active choice to place your DPS or mitigative rotation on hold in favor of the movement speed increase. This is currently a dealbreaker in my evaluation of the talent. 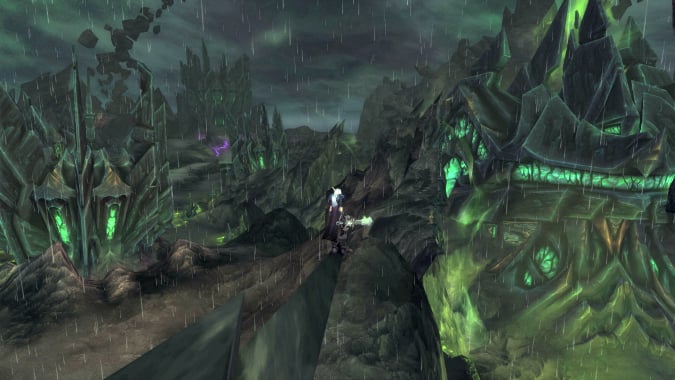 Straight to the point

Let’s get preliminary comparisons out of the way: without the pacify effect, it’s fair to say that Wraith Walk and Death’s Advance are on a similar playing field. Death’s Advance is slower but more reliable, while Wraith Walk is burstier but less frequent. Pick one or the other — it would largely come down to taste. I do feel it’s worth mentioning, however, that current testing of Legion raid encounters such as Nythendra reveal that mechanics such as Volatile Rot (i.e. Iron Reaver’s Artillery mechanic 2.0) occur with enough frequency that Death’s Advance would be preferable due to its cooldown alone. But I digress!

Why do I consider the pacify effect of Wraith Walk to be so detrimental? To begin with, it’s bad enough to think that we choose to give up DPS upon using our only form of mobility when one of the supposed perks of playing a melee class is being able to maintain nearly all of one’s damage output on the move, provided the target is in melee range. This pales in comparison, however, to the situation for Blood DKs: remember that Death Strike, Marrowrend, and Blood Strike are considered “attacks,” and thus suppressed for the duration of Wraith Walk. Even within a three second window, this can be disastrous for bosses that threaten a tank frequently — and it’s worth keeping in mind that Blizzard has boasted about how Death Strike is supposedly the most powerful reactive mitigation tool in the game right now — why on Earth would it then make sense for that tool to be suppressed in such a fashion?

At the end of the day, even if we brush aside changes to class toolkits and comparisons between every other aspect of Death’s Advance to Wraith Walk, the pacify effect represents a downside to the latter ability that I consider to be an extreme flaw. I can guarantee that its current implementation will result in /cancelaura macros (especially among tanks), and I consider that to lend itself towards poor gameplay. At the risk of sounding pedantic, my primary point of feedback to Blizzard would be that Wraith Walk’s entire implementation feels unnecessary and restrictive when Death’s Advance has done its job well for the class for this long. If Wraith Walk must replace it, then the pacify effect needs to go in order for it to be considered on a comparative playing field. I look forward to seeing whether Wraith Walk gets further iteration over the course of the next few months.