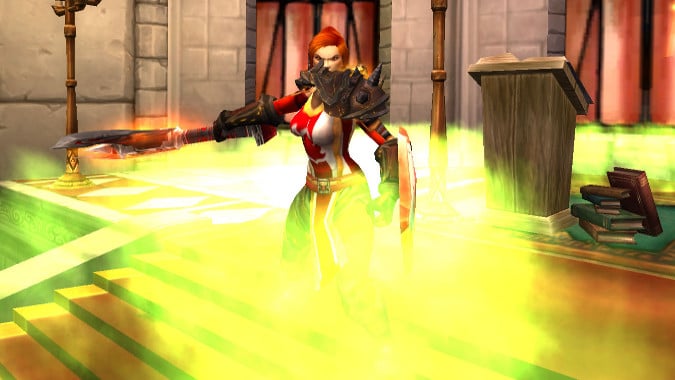 With the benefit of hindsight we can look back on the Scarlet Crusade and see fanatics who let their zeal overcome their wisdom. But to do so devoid of context is to miss a great deal of the tragedy inherent in the order’s formation. The Scarlet Crusade was once a bastion standing in a kingdom whose Prince had murdered the King and set a tide of undeath loose to plague the land. Lordaeron itself was falling to demons and monsters, and in this time of utter chaos men and women of strength and conviction did not falter. Some of them banded together, and vowed to take the fight to those who would destroy everything they held dear.

One of those was Brigitte Abbendis. Of the former leaders of the Scarlet Crusade, Brigitte is perhaps emblematic of all that it sought to do, all that it failed to do, and ultimately of how it ended.

Before the world ended

Here are the bare facts of Brigitte Abbendis’ life before the plague ravaged Lordaeron. Her father was High General before her, although we don’t know his first name. He fought in the First and Second War alongside Alexandros Mograine, and both were members of the Order of the Silver Hand. Brigitte herself would join the Order, making her not only one of Azeroth’s first Paladins but one of the first women to be so. She was known for her prowess in battle, her rigid loyalty to her father, her abrasive tongue, and her somewhat reckless style of command.

At some point, Brigitte had a daughter, Lynnia. It’s not known who the child’s father was, but since she bears the Abbendis family name it’s possible no one was ever acknowledged as her sire. One of the reasons we know so little of Brigitte’s life before was because it was wiped away in the rising tide of the Scourge, and soon, along with the other members of the Silver Hand she would be faced with a world gone mad.

Arthas Menethil, son of Terenas and Paladin in his own right, would turn his back on the Order of the Silver Hand, on the bonds of loyalty to his father the King, and even his responsibility to his people. As a Death Knight, he helped usher in the destruction of Lordaeron as he assassinated his father and brought the Scourge in all its horror to the lands he should have been protecting. This act affected Brigitte Abbendis so deeply that she wrote of it years later in her diary.

That somehow seems right. At our finest, we have always been the salt of the earth, rising up to take back our homes from the filth of the Scourge corruption, to return our Lordaeron to its former glory. To a time before the Scourge. Before Arthas and regicide… before the Lich King.

The birth of the Crusade

When Alexandros Mograine called those he trusted most to a meeting to reveal the artifact that had blighted his hand at Blackrock Mountain, at the end of the Second War, High General Abbendis and his daughter came in answer to his summons. Thus was Brigitte one of the early members of the Order of the Silver Hand to witness the Holy Light redeem the crystal and heal Mograine’s hand, and she took part in the formation of what would become the Scarlet Crusade along with her father.

Brigitte accompanied the fledgling Crusade on its first attempt to retake Stratholme, which had been wholly lost to the Scourge following Arthas’ dreaded purge. It failed, and they barely survived, retreating and ultimately deciding to withdraw to Tyr’s Hand. There, they attempted to raise an army from the ranks of the devout living there.

Brigitte lacked her father’s deference to figures like Mograine or Saiden Dathrohan, the latter of whom was one of the original five Paladins (alongside Uther, Turalyon, Tirion Fordring, and Gavinrad the Dire). Dathrohan took a leading role in the nascent Scarlet Crusade, but Brigitte objected to his plan to contain the Scourge instead of confronting Arthas in revenge for the murder of King Terenas. It was not the last time she would argue with her allies. 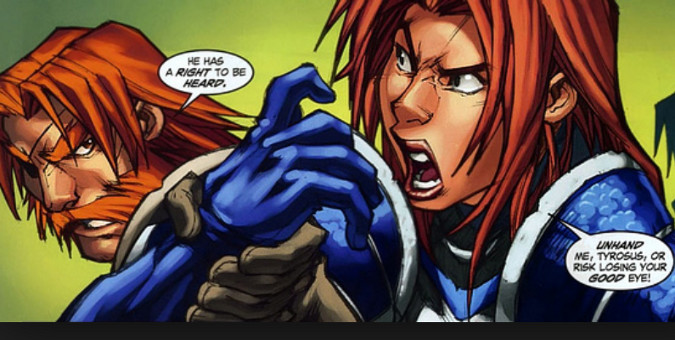 While Brigitte rode alongside Alexandros Mograine and Maxwell Tyrosus to spy on the Forsaken, she nearly came to blows with Tyrosus over the presence of a Troll who claimed to be able to speak with the Holy Light. Like her father, Brigitte displayed a streak of racism (both of the Abbendis’ had often decried the “lesser races”) that she allowed to direct her actions. Still, in the face of the threat of the Scourge and the plague of undeath, that was of little consequence.

What Brigitte didn’t know — what no one knew — was that Saiden Dathrohan was dead. That he had in fact been dead since their loss in Stratholme, and that the dreadlord Balnazzar was infesting his corpse, using him to twist the Crusade from its original purpose. Mograine and the others had initially intended the Crusade to defend Lordaeron from the Scourge, but the demon wearing Dathrohan’s body had an entirely different idea. He conspired with Kel’Thuzad, suborned Mograine’s son Renault, and orchestrated the assassination of Mograine — in so doing removing one of the strongest voices that would have prevented him from using the Crusade as he saw fit.

Perhaps it was the clash of personalities that led to Brigitte remaining loyal to the Crusade when Tyrosus left, as the two had long argued. Or perhaps it was the simple fact that her father remained with the Crusade, effectively ruler of Tyr’s Hand in the Order’s name. But most likely was because while she had argued with Dathrohan before his death, the new direction Balnazzar provided suited her. Her entire world had been destroyed when Arthas killed his father and upended everything she knew to be true. The Crusade under Balnazzar promised her simple, direct solutions to the woes of her beloved country. The Forsaken? No different than the Scourge. Any who disagreed with the Crusade? Traitors and heretics. The other races of Azeroth such as Elves or Dwarves? Inferior beings who had nothing to offer.

And then her father died. 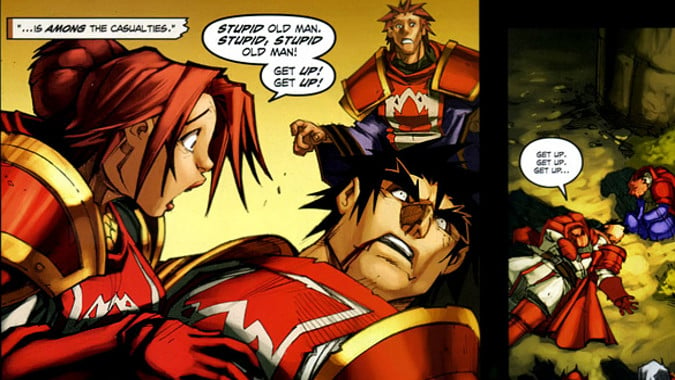 This moment was a catalyst. Hearthglen had held out against the Scourge yet again, thanks to the Scarlet Crusade (because it suited the demon who secretly led them) but the cost was high, and Brigitte paid dearly. For all that they bickered, for all that she bickered with everyone, Brigitte loved her father and her country. Now she’d lost one and seen the other infested with shambling undead that refused to stop destroying everything she loved.

Taking her father’s place as High General, she took up rulership of Tyr’s Hand, which likely suited Dathrohan fine, as the prickly Abbendis was best used at a distance — too much time spent in proximity to her would likely have led to conflict. Thus when Dathrohan was exposed as Balnazzar and slain, and Tirion Fordring’s son Taelan was killed by his fellow Scarlet Crusade outside of Hearthglen, Abbendis was left essentially in control of the Crusade by default. 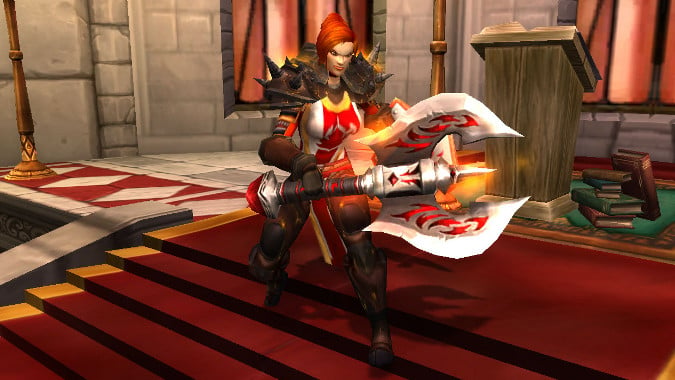 Abbendis began hearing whispers, and attributed them to the Holy Light, which she still faithfully (perhaps overzealously) sought to follow. All of her life’s reverses — the loss of Lordaeron, the death of her father, the destruction of the Order of the Silver Hand, the slow dismemberment of the Scarlet Crusade — had not stripped that faith from her. And so, when she began dreaming of whispers that called her northward, she attributed them to the Holy Light.

But they were not.

Another demon, the Dreadlord Mal’Ganis, had chosen to make use of the Scarlet Crusade and had chosen to manipulate Abbendis. Her diary reveals the extent of the manipulation, which was extensive. It didn’t hurt Mal’Ganis’ campaign that the Lich King, Arthas Menethil himself, was pressing the Scarlet Crusade with his Death Knights, making an evacuation necessary. So Abbendis sailed her forces north and settled in New Hearthglen (named for the city her father died to save). There she met her end at the hands of the Argent Crusade, who had her assassinated. She went down fighting, of course. Sometimes it seemed that Abbendis was born fighting — her own father, her brothers and sisters in the Order, the Scarlet Crusade she rose to lead, the Scourge, and the Forsaken. Her life was consumed in war against a world she no longer recognized.

With the benefit of hindsight, we can see High General Brigitte Abbendis’ flaws. She was quick to anger. She accepted her father’s racist views. She, who almost never failed to question others, did fail at the exact wrong time and ended her life leading her order onto a dark path. But Brigitte Abbendis was a Paladin, a member of the Order of the Silver Hand, who saw evil overwhelm everything she held dear and fought to try and preserve it. Her failures are real, but one can never question her courage or her dedication. Without her, Mograine would have died in Stratholme along with his son Darion. Without her, Hearthglen would have fallen to the Scourge. She saw her entire world dying, and she chose to fight.

No one embodied the  good and the ill of the Crusade — good men and women who were mislded and failed to see it — quite like Brigitte Abbendis.