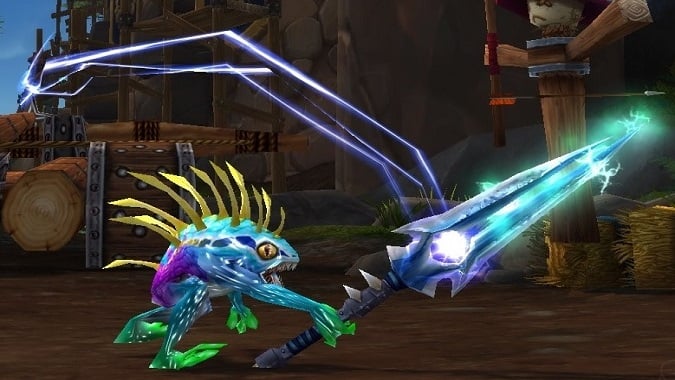 Legion‘s artifact weapons have placed more emphasis than ever before on the tools we do battle with. They will give us spec-defining abilities and some even have their own spell animations. Given that these artifacts are supposed to represent the iconic weapons for each spec, it’s no surprise to see that one of the artifact skins for Outlaw Rogues is very similar to our old friend Thunderfury, Blessed Blade of the Windseeker. (Yes, someone said it.)

Just about everyone has seen this wicked-looking one-hander in the game, whether it’s being linked endlessly in trade chat or you’ve got your own inflatable version. But what made this weapon so special back in classic? And why are warriors upset about this artifact skin? Today we tell the story of WoW‘s very first legendary quest line.

Thunderfury became available in patch 1.6, but “available” was a relative term. In order to start the quest line, you had to loot one of the Bindings of the Windseeker from either Garr or Baron Geddon in Molten Core, and that was no easy task. With a 4% drop rate, many guilds never saw a single Bindings. If you managed to score one, you could begin the quest line — but you needed both Bindings in order to complete it. That made Thunderfury a very uncommon sight, and part of the reason people linked it in trade chat, to show off their absurdly rare loot, with its absurdly long name. (In classic WoW, you could only link an item if you had it in your inventory.)

Like other legendary quest lines such as those for the Fangs of the Father or Val’anyr, the Thunderfury quests were limited to specific classes. Only warriors, paladins, rogues, and, hunters (yes, all loot is hunter loot) could accept the quest line. Death Knights were added later at the launch of Wrath. Now the quest line is available to all classes.

With the Bindings in hand, you traveled to Highlord Demitrian in Silithus. He gave you the Vessel of Rebirth, which provided the next quest. This was the “gather insane ingredients” part of the quest line, which has become a staple of legendary equipment ever since. This included the other Bindings, the Essence of the Firelord from defeating Ragnaros, and ten Enchanted Elementium Bars. The latter was no small task. You could buy them on the Auction House, but the recipe to transmute an Arcanite Bar had a two-day cooldown, so demand always outpaced supply. For 100 bars, that was more than half a years’ worth of alchemy cooldowns. Seekers of Thunderfury often asked their guildmates to reserve all their Arcanite for the quest requirements.

Gathering the ingredients did not mean you could make the bars, however. Now you needed a miner with the smelting recipe. The recipe also came from Blackwing Lair, and the method of obtaining it was unlike any other recipe in the game. You needed a priest to Mind Control a goblin in BWL called Master Elemental Shaper Krixix. Under your priest’s control, Krixix could then be commanded to teach the target miner the recipe. Later, Blizzard added a book to the goblin’s loot table to teach the recipe, but in classic this was the only way to proceed.

When you fork over everything to Demitrian, he immediately summoned a 40-player air elemental raid boss on top of you. I like to imagine, in a pre-Wowhead, pre-data mining era, that the first few players who made it this far were not expecting that to happen. I hope they died laughing.

That summoned boss, Prince Thunderaan, is the son of Al’Akir, the Elemental Lord of Air that we fought in Cataclysm‘s Throne of the Four Winds. While many raid bosses in classic WoW were very difficult given the limitations and class mechanics of the time, Thunderaan was not one of them. A mere 20 could defeat him, and 40 was overkill. He had an AOE knockback/silence in melee range and a chain lightning effect with a stun for ranged players. Tanking and spanking was the road to a disappointingly easy victory.

A cool effect was that Thunderaan actually carried a model of Thunderfury, and it dropped to the ground when you defeated him, much like Ragnaros and his big pointy hammer. The player who spawned him could loot the quest item to complete the quest line and receive Thunderfury from Demitrian.

Blessings of the blade

Most people think of Thunderfury as a DPS Rogue weapon, but most guilds actually gave it to Warriors for tanking. Agility granted dodge and armor in addition to crit. Stamina and resistance were great for tanking, obviously. But the biggest tanking bonus was the proc. Threat was everything to tanks back in classic. “Wait for Sunders” (meaning Sunder Armor, a warrior ability that was pruned in Warlords of Draenor) was what every raid leader told their DPS. Thundery’s proc hit five enemies with about one Sunder Armor’s worth of threat. Since tanks had few effective AOE threat options, that was absolutely massive. The sword also lowered the attack speed of debuffed targets by 20%, which made the weapon very helpful to tanks no matter who was wielding it.

The same proc actually worked against players who used the sword for DPS. It was easy to pull threat from a tank when Thunderfury went off. It didn’t help that each proc made the mobs more vulnerable to future procs by lowering their nature resistance.

This is why some players are asking for the Thunderfury-like artifact skin (shown above) to go to Protection Warriors instead of Outlaw Rogues.

Thunderfury’s quest line was only three quests long — but it was the first. The quest line for Atiesh built on that model. Later legendary quest lines like those for Shadowmourne and Dragonwrath were much more elaborate, but it all started here. Next time you link Thunderfury, Blessed Blade of the Windseeker in chat, say a prayer for all those in classic who only ever got one Binding.