The title of this column might seem a little odd to some. After all, it’s pretty common to find instances of when roleplay breaks lore — as in someone decided to go against known lore to add their own spin on their character. But even though it’s rarer to find, sometimes you’ll run into the inverse: Roleplayers that have dutifully stuck to the lore, working around known characters and events and crafting their own stories that neatly fit into it all.

And then it happens. Maybe it’s a new book, a new short story, a comic or even an expansion, but some piece of existing, known lore is either clarified or altered. Suddenly, that story you’ve crafted around existing lore no longer works within it. Basically, that one thing you’ve been trying to avoid — breaking the lore — happens, through no fault of your own. Your roleplay didn’t break the lore, the lore went and broke your roleplay.

What do you do? 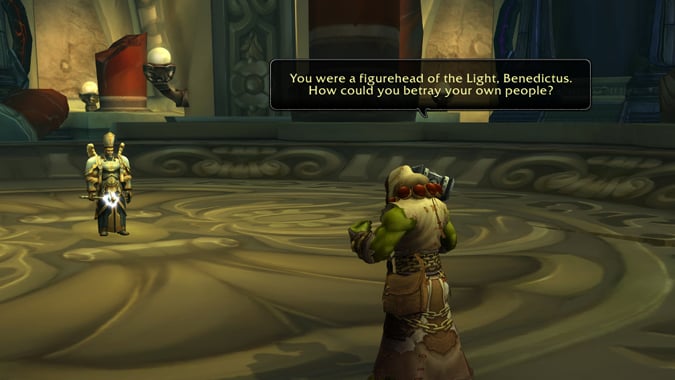 In a game with lore as expansive and massive as World of Warcraft‘s, it’s inevitable that at some point, that story is going to change. Sometimes it’s just a different take on an event that everyone assumed was common knowledge and concrete — like the introduction of the Draenei, and subsequent change to exactly how Sargeras was corrupted. Sometimes it’s more complicated than that — a heel turn, like when Archbishop Benedictus suddenly revealed his allegiance with the Twilight Cult in Cataclysm.

If you’ve incorporated elements of lore in your roleplay, and those elements suddenly change, there’s no need for despair — there’s methods for dealing with these issues. The first and simplest is just rolling with the lore. Someone’s suddenly a villain? Your character should be just as shocked as anyone else. After all, your character is working within the scope of your knowledge.

In situations like this, it can actually add to and advance your roleplay in unexpected ways. Taking the Archbishop as an example: Let’s say you’ve written your character as some kind of trainee or student of Benedictus. That sudden revelation isn’t just a shock to your character, it’s an opportunity for them to question everything they’ve ever been taught. Are they going to trust in the Light to lead them the right way? Has their faith been irrevocably shaken? Do they try and follow Benedictus onward down a darker path? The possibilities are endless. 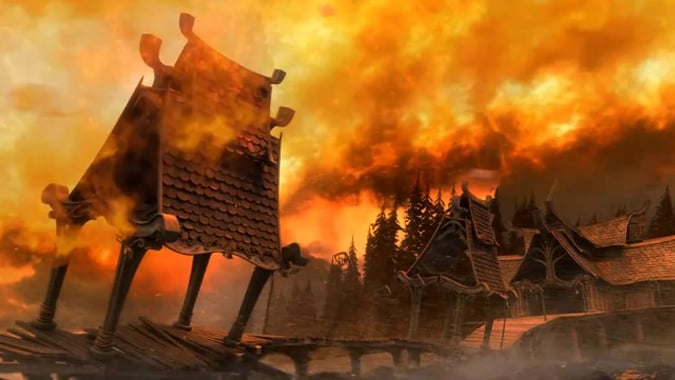 Back up and begin again

Sometimes it’s not that easy, especially if you’ve gone out of your way to tie your character to NPCs or certain events that are now being told in a completely different light. Maybe your character was a resident of Auberdine in Darkshore, had an established home and family with the NPCs that were located there. That village was completely wiped out in Cataclysm, and many of the familiar NPCs are now dead.

You could run with it if you wanted to — have your character work through and overcome their grief in time, find a new place to call home. But that kind of roleplay isn’t exactly the most cheerful or relaxing way to spend your gametime, and not everyone wants to deal with that kind of serious situation. In that case, you can simply back things up and start over — adjust your character’s origin to somewhere else, make their family a group that is wholly fictional, and therefore out of reach of major, world changing events.

Of course the easiest way to avoid these kinds of situations is to make sure they don’t happen in the first place — which means avoiding using lore characters or situations in your roleplay from the onset. Instead of writing that priest or paladin as some kind of student of the Archbishop, make them a novice to another random character you made up. Instead of establishing a character has grown up in an existing city in-game, make them the resident of some small town far, far away — or simply leave it vague. Your character doesn’t have to be from Auberdine, they could simply be from some remote area of Darkshore or Ashenvale.

A character’s origin doesn’t really need to be tied to the characters and NPCs already established by Blizzard. If you’re working around the lore, rather than directly with it, it’s far less likely you’ll ever run into a situation you want to change or avoid — and you won’t get your story flipped around beneath you. The same applies to stories in general — you don’t have to pull current lore, or even past lore into the stories you choose to tell.

Your character’s story is as fluid and changeable as the stories that Blizzard tells. You’ve got every right to change your story to suit how you’d like to play it — just like Blizzard has every right to adjust and make changes to their own story as they see fit. And this doesn’t just apply to situations where Blizzard makes some kind of major change to lore — if you’re roleplaying with someone else, and they decide to either leave the game, or find someone new to roleplay with, you can use the same methods for that as well.

Basically, your story is your own, and as a roleplayer, you can choose to write that story how you see fit. While Blizzard will undoubtedly continue making changes and refining their story over time, how much or how little that affects your character is and always will be entirely up to you.