Last week we went a little more in-depth with the Demon Hunter class — the lore and background of new Demon Hunters, what being a Demon Hunter really means, and some things to consider when creating one. But although Demon Hunters feature heavily in the next expansion, they aren’t the only class or characters worth looking at. A reader on Twitter asked if I could take a similar look at Wardens for this week.

Which is really not a bad idea at all. Their history in Night Elf society makes them a pretty compelling background choice for Night Elf roleplayers when it comes to upcoming Legion roleplay opportunities.  And Wardens — and Watchers — also play into both the Demon Hunter starting experience, and the Legion experience itself. 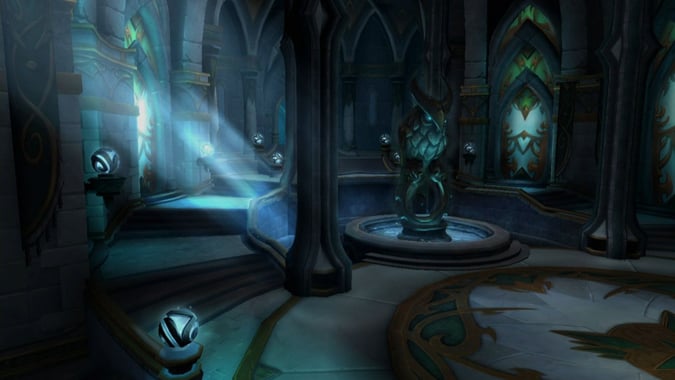 Sometimes people tend to use the two words interchangeably, but there’s a difference between Wardens and Watchers. Watchers were essentially both jailers and marshals of Night Elf society — they enforced the law where necessary, hunted down any would-be wrong-doers, and kept the criminals safely locked away. Wardens, on the other hand, were a division of the Watchers — Maiev being the first and most well-known of this elite group.

Watchers were both highly respected and, in some ways, feared — although that was almost expected. Although the Watchers were first created to watch over Illidan after his imprisonment, their duties and responsibilities expanded over the years. They were the elite of the elite, capable of tracking down pretty much anything, fiercely devoted to the safety of Night Elf society.

Note that the Watchers were not considered part of the Night Elf military. They weren’t Sentinels, they weren’t part of the Sisterhood of Elune — Watchers worked on their own, almost out of the jurisdiction of anyone save Tyrande and the eyes of Elune. Because of this, Watchers tended to be very isolationist in nature — not exactly on the friendliest terms with their fellow Night Elves, far closer with their fellow Watchers than anyone else. 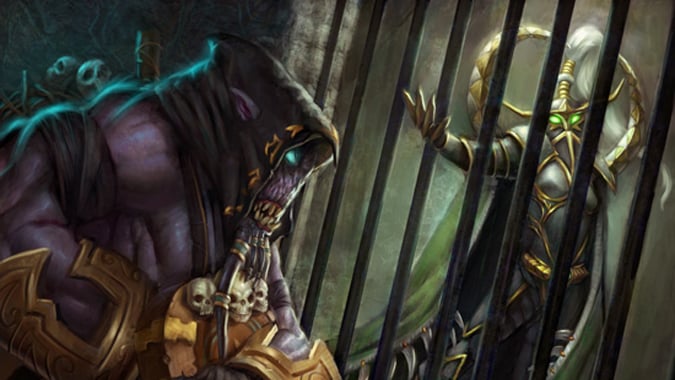 History of the Watchers

Despite having such ancient ties to events that happened over ten thousand years ago, the Watchers of today have little to nothing to do with those events. Here’s what happened in a nutshell: During the attack of the Burning Legion in Warcraft 3, Tyrande Whisperwind came to the Barrow Dens to set Illidan free. This didn’t sit well with the Watchers, who had been making sure Illidan stayed put all this time.

But Tyrande didn’t care. Together with her Sentinels, she fought and killed a number of Watchers on her way to setting Illidan free. When Maiev realized what Tyrande had done, she vowed to hunt Illidan down and put him right back in prison where he belonged. She took the majority of the Watchers with her on this task, and before all was said and done, the majority of the Watchers were completely wiped out.

After Illidan’s defeat in Burning Crusade, Maiev returned to Darnassus and began training a new generation of Watchers. In the novel Wolfheart, Maiev ended up having a massive falling out with the Night Elves and leaving again — taking those Watchers that were loyal with her. Others stayed behind, and were subsequently trained by her brother, Jarod Shadowsong. 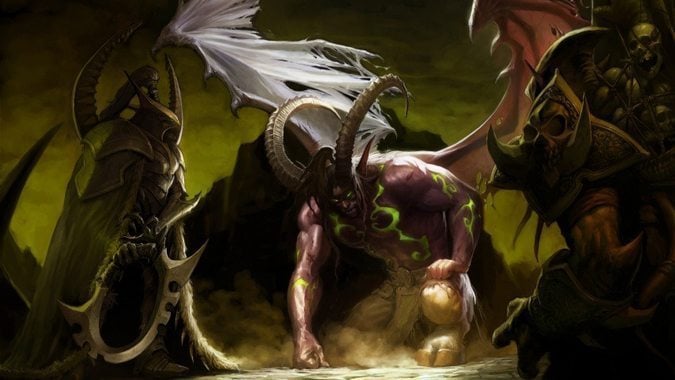 Given what we know of Watcher history, there are a couple of choices to be made here: Are you loyal to the Night Elves of Darnassus, or are you loyal to Maiev? If loyal to Darnassus, your character may have been involved with a few different recent events — the Watchers are still guarding the Barrow Dens in Hyjal. There’s even a new group of Wardens — the Shadow Wardens, who were responsible for guarding Fandral Staghelm in Cataclysm.

If you’re loyal to Maiev, you’re either one of the Watchers that managed to escape detection after the end of Wolfheart, or your history goes back much, much further than that. You see, not all of the Watchers were stationed with Maiev, watching Illidan in the Barrow Dens after the War of the Ancients. There was another, secret facility — the Vault of the Wardens — constructed after the war, and there was a completely separate sect of Wardens stationed there for thousands of years.

Those Wardens aren’t encountered until Legion, when the Demon Hunters imprisoned in the facility are finally set free. And much like the Pandaren in Mists of Pandaria, this particular group of Wardens are presumed to be largely unaware of the goings-on of the outside world, beyond Maiev’s arrival and departure at the end of Burning Crusade. 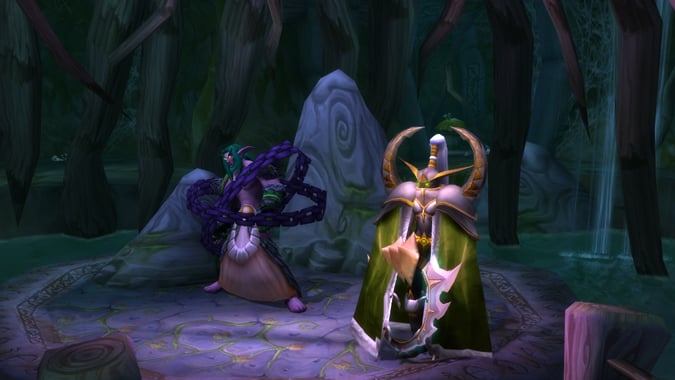 Needless to say, a Watcher character isn’t someone to be trifled with. They aren’t exactly friendly, either — mind you, most Watchers have spent years isolated with no one other than their fellow Watchers and the criminals they hold imprisoned to keep them company. Needless to say they aren’t the most social or outgoing of creatures, and depending on how long your character has been serving in that role, they could be anywhere from suspiciously wary to outright rude when dealing with Night Elves who aren’t Watchers themselves.

As for the rest of the world…Watchers don’t really seem to concern themselves with the matters of outsiders. Those loyal to Maiev shared her views on the Highborne Mages and Worgen allowed to live in Darnassus. The acceptance of the Highborne in particular was viewed with particular outrage, because the Highborne were the very reason for the War of the Ancients and the subsequent formation of the Watchers to begin with. Allowing them back into Night Elf society was not only like allowing criminals to roam free among the public, it was like Tyrande and Malfurion were invalidating the Watchers themselves.

For Night Elves who spent thousands of years dedicated to that cause, the Watchers certainly had reason to be angry. As for the Wardens carefully hidden away in the Vault of the Wardens, they had little knowledge of the outside world until Maiev reappeared. They are driven solely by their duty, with little time or even desire to cultivate personal relationships. The bond between Watchers and Wardens is something akin to family, but even stronger — a Watcher knows that only a fellow Watcher or Warden really understands what their life has been like, because they shared that life themselves. 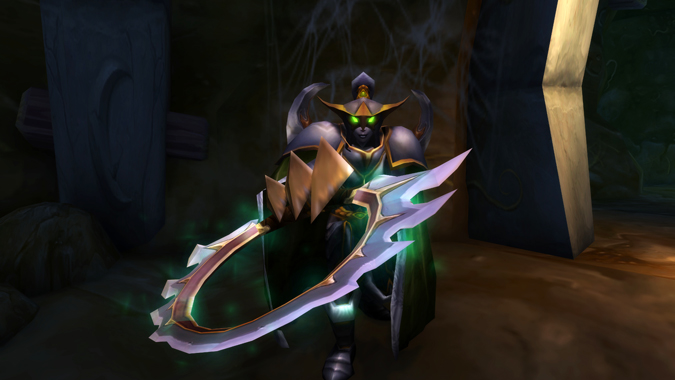 As far as Night Elf society is concerned, the Watchers and Wardens are the elite of the elite, and questioning their orders is foolhardy at best, suicidal at worst. Despite the events of Wolfheart, the Watchers are still held in high regard, even more so now that they’re led by Jarod Shadowsong, one of the biggest heroes of the War of the Ancients.

But because Watchers are so reclusive, and so dedicated to their cause, they aren’t exactly well known on a personal level. You aren’t going to see a lot of people going out of their way to make friends with a Watcher, because a Watcher’s duty will naturally pull them away before any deep bonds of friendship can really form.

That said, if you’re going to roleplay a Watcher, you’re choosing a pretty difficult path — they’re not known for being friendly, and there’s little reason for anyone other than a Night Elf to speak to them. Their stern nature can be off-putting to fellow roleplayers. However, if you’ve got a few friends that are up for it, creating a group of Watchers that have served together might be a fun way to approach the upcoming expansion.

Night Elves in particular have a lot to look forward to in Legion. Watchers and Wardens aren’t normally the most sociable of creatures, but the enormity of what we’re facing in the next expansion is more than enough to make them pop up out of the woodwork and start talking. Keep in mind, though, making a Watcher or Warden is just one way to take advantage of all the lore you’ll find. Even if that kind of background isn’t for you, pretty much any Night Elf with at least some knowledge of kaldorei history is going to find plenty of reasons for roleplay in the Broken Isles.