The Queue: Running With The Raptor 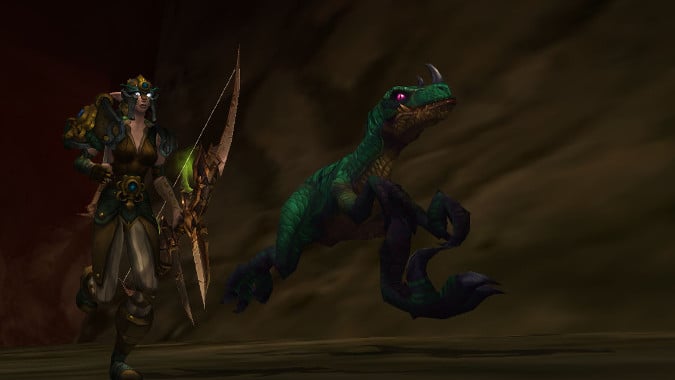 Ran BWL, Molten Core and Ulduar. Got a few decent mail pieces, but the prizes I sought most still elude me. Maybe I’ll hit Dragon Soul next. Heck, if you guys have any suggestions for good Hunter transmogs, let me know.

This is the Queue. We talk Blizzard games. Let us partake.

Q4tQ-Beta: Is the “mask” character customization selection something demon hunters can change in the barber shop? How about horns and the other funky stuff? I imagine the skin aspects are set in stone, are they?

I’m told that horns, tattoos, that mask over the eyes are all changeable in the Barber Shop. You can’t actually so skin color but otherwise you’re good to go.

I have done what I seem to do each expansion: I have a time where I get completely bored of the game (so with WoD that’s been the last 6-9 months). I either stop playing or unsub entirely. Then as soon as new stuff is on the horizon, I start playing again and really curse myself for all the months I didn’t play that I could’ve spent collecting/mount farming/rep grinding etc etc.

So that’s what I’m doing now – playing like a mad person trying to get ‘old’ things done especially the things that will be going away. Once Legion hits I’m back in the saddle and won’t have time for any of the ‘old stuff’. In about a year I will go through this entire cycle again.

I don’t think you should ever curse yourself or be upset with yourself for taking a WoW break, especially not during long content droughts. There’s a lot going on, you can’t do everything you’ll want to do and sometimes you have to prioritize what you do even for leisure activities like playing games. I’ve played less than I usually do the last few months and I’m glad for it, really — I’m coming back to a more usual WoW schedule and I’m enjoying myself, and the anticipation for Legion is pretty high right now. So I’m glad I cut back for a while.

Of course, to be really fair, a lot of that time was spent playing the Alpha and then the Beta, so how much time I actually spent away from WoW is debatable. But you get my meaning.

Do you think we’ll see continued balancing (or even talent tree shifts) during the pre-expansion event or will it be pretty settled until we get our Artifact in Legion?. I know that no numbers will reflect the reality of our Artifact but if everyone is without, then we can get a sense of how balanced the classes are in relation to each other. Am I very wrong?

Based on the experience I’ve had in other expansions, if some spec comes out the gate and just destroys the meters, it’ll get adjusted. (I’m looking at you, DPS Warriors in Wrath of the Lich King after the Cataclysm pre-launch patch made you damage gods)

I can’t say we will or won’t see these changes, but I do know that if they’re needed Blizzard won’t shy away from them.

So on final push to get Druid to 100 today. Half way through 97 as of making this comment. However noticing something and that is if level too fast in WoD the lack of quest reward gear makes my druid a very squishy boomkin. For those that have leveled on the Beta do characters get extra squishy if level too fast or do quests reward gear consistently enough so don’t become extra squishy from bad gear while leveling?

Based on my experiences while leveling, no. Keep in mind I’ve only leveled Warriors, but what happens is that you get quest gear that scales to your level, so if you ding 106 in (as an example) Stormheim the quest gear will go from ilevel 740 to 770 (made up numbers just used to illustrate the point). There’s a fair amount of quest gear too, you don’t have to go say five levels wearing the same stuff, you’ll get upgrades quickly.

Again, I can’t really speak for Boomkin but I felt like whatever squishiness I encountered was due to mechanics and not a lack of gear.

Usually when a new xpac is released the old xpac has its leveling time lowered. (I.e. People can level through old content faster.) Is that happening with WoD leveling in the upcoming patch?

Not that I’ve heard or noticed but then again to me Warlords already feels like you can level to 94 in Shadowmoon/Frostfire, to 95 in Gorgrond, close to 98 in Talador and then choose between Nagrand and Spires for the final push to 100, so I don’t know that it needs an adjustment.

Did Blizz revert the requirement that to learn a piece for Transmog you have to not only be able to equip it but for armor it must be your primary armor type? IE Warriors can equip all armors but they’ll only learn plate. I keep seeing people talking like they expect to do it all from a plate-wearer even though I thought it was announced months ago they were restricting it so plate classes didn’t have a collection advantage. Are those players just out of the loop?

Nope, that’s still how it works — when you’re on a plate wearing class the only items you see are plate mogs. If you want cloth, get on a clothie to farm it.

Q4TQ: Is there a NON-mount item that you incessantly farm and just cannot get to drop?  For me it was Fandral’s Seed Pouch – Staghelm just did NOT want my druid to be a fire kitty.  It was like Fire Kitty Club hazing.

My Warriors can’t seem to get the 2h sword from Throne of Thunder trash to drop. My Hunter can’t get a mail drop to save her life. Especially Dragonstalker shoulders, they just won’t drop.

Okay, that’s the Queue for today. I’m going to be working on the sequel to Nameless this weekend, I’m making good progress and feel like it’s on track for a Christmas release. I’ll also be working on my Hunter’s mog set, so again, any suggestions are welcome.

Blizzard Watch is made possible by people like you.
Please consider supporting our Patreon!
Filed Under: Dakota The Raptor, Hunter, Raptor, Transmog Farming
Advertisement